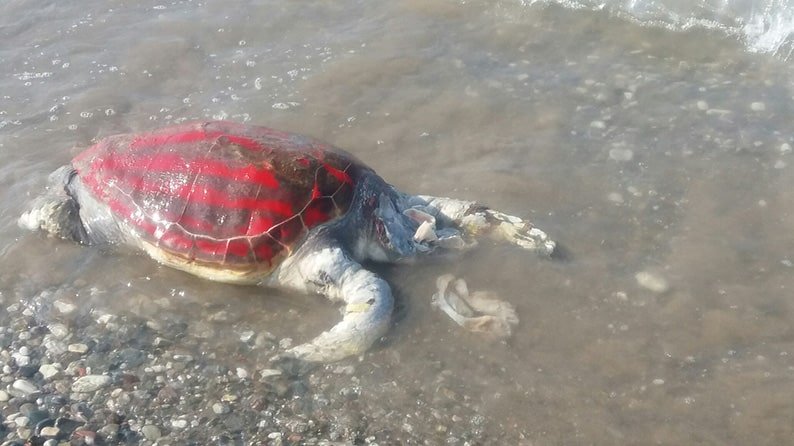 A Green party announcement condemning the brutal torturing and killing of a sea turtle at a Paphos beach caused confusion on social media on Tuesday, after it emerged that the turtle had been washed ashore dead and marked as counted with red paint by a government official.

The party had said that the turtle’s limbs had been hacked off and the perpetrators had then sprayed the dead animal’s shell with red paint, an act of “a sick mind”.

However, local daily Phileleftheros later reported that the turtle had been washed ashore and bathers who found it informed the government’s Marine Turtle Protection programme.

According to the reports, an officer then went to the beach and painted the dead turtle, to make sure it wouldn’t be counted twice.  The officer then informed the municipality so they could remove the animal from the beach.

Meanwhile, news of the turtle’s ‘brutal killing’ reached the Green Party and prompted their statement on Monday, which claimed that the fisheries department couldn’t be bothered to find the people who carried out the killing and sprayed the turtle.

Comments on social media charged that the Green Party rushed to politically exploit the incident without bothering to check the facts.

Head of the party Giorgos Perdikis said the party was not aware of this version of the events, commenting “if this is true, shouldn’t the fisheries department know about it?”

In a statement, the department expressed surprise at the “false reports” alleging the “brutal torturing of a turtle”, which reproduce claims made in a misleading statement by the Paphos branch of the Green party.

After being informed of a dead turtle at the Yeroskipou beach on Sunday night, the department said, it notified the Cyprus Wildlife Society, which implements the Turtle Protection Programme in collaboration with the fisheries department.

The following morning, a programme official went to the beach, recorded the turtle’s species, dimensions, and condition, obtained tissue samples for DNA testing, and spray-painted its shell red so that it wouldn’t be counted again – and also to prevent use of the shell by anyone.

Then, the municipal authorities were notified to collect and bury the dead animal, the statement said.

According to the fisheries department, the dead female turtle was a Caretta Caretta, measured at 70 by 68 centimetres.

Its body had started to decompose, hence the decayed limbs, but showed no signs of abuse.