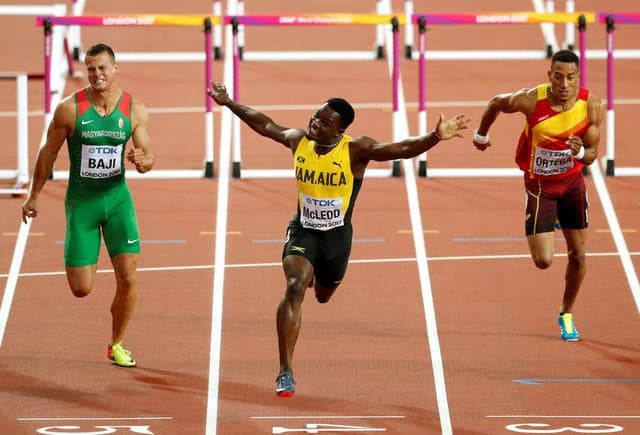 As Usain Bolt takes his leave of athletics and the desperate hunt grows to find charismatic new trailblazers for the sport, another young Jamaican, Omar McLeod, demonstrated in winning the 110 metres hurdles title on Monday why he may fit the bill.

He’s young, cool, bright, very fast and likes to style himself as “Mr Silk” with the smooth hurdling technique.

After a weekend where it was all doom and gloom back home after the 100 metres losses of Bolt and Elaine Thompson, 23-year-old Mcleod chose the perfect night to bound headlong to world championship glory and cheer his nation.

“Happy Independence Day, Jamaica! I love you guys!” he declared with a laugh, recognising that everyone was watching him on the island’s public holiday as he became the first man since American Allen Johnson in 1997 to pull off the Olympics/World Championships 110m hurdles double in successive years.

“I’m elated, completely overcome with emotion and I especially wanted to dedicate this win to Usain. I felt it was up to me out there to bring the boost back to Jamaica and I think I’ve done that.”

Yet while he saluted his peerless hero Bolt, who was only able to win bronze in his final individual 100m, he also looked and sounded every inch the sort of talismanic figure who could ensure swiftly that Jamaica has a new male superstar to savour.

For after comfortably defeating what he considered the best 110m hurdles field in history in 13.04 seconds, the U.S.-based speedster made it clear that he felt this was just the beginning of something even more spectacular.

Nobody is suggesting that Bolt is anything but irreplaceable but here is an athlete who actually has strings to his bow that even the great Usain never had.

For not only is he already the only man ever to have run under 10 seconds for 100 metres and under 13 seconds for the 110m hurdles, he can also spread his talent across events as varied as the 400m hurdles and the 200m.

Next year, he declared after his victory, would be the time to see him spread his wings.

“I’ve got new worlds to conquer now,” he beamed. “I really, really want that world record now so we’ll see what happens next.”

The man who holds the 12.80 seconds mark that he is after, American Aries Merritt, could only finish fifth in the final and the future of the event now lies in McLeod’s quicksilver feet.

He is the only top high hurdler still taking eight steps to reach the first hurdle and, though he was planning to move down to seven this season, he put that plan back to next year to ensure he did not mess with his world championships ambitions.

Next year, though, he will definitely experiment.

“It was probably the best line up in history tonight. I knew in order to win I had to do it the Omar McLeod way,” he said.

“I had to bring my own spark back. I had to get out and take control of the race. And just go out and have fun. And I did that.”

There was, he said, a special reason to deliver. “My mum is here, so I had to do it for her,” he said, after having given her a big hug at trackside. McLeod looks to be a breath of fresh air for the sport.

Chantek, ‘the ape who went to college,’ dies at 39

Omonia continue to misfire in stalemate with Ermis