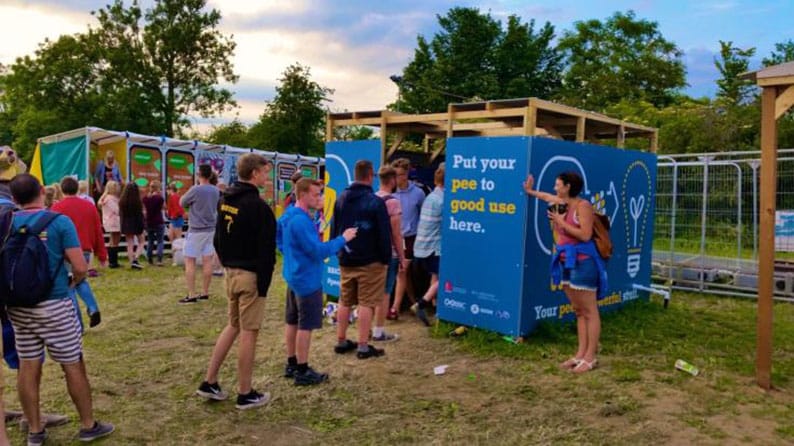 A toilet that generates electricity from urine developed by a UK-based Cypriot professor has been promoted with big success at this year’s Glastonbury festival and the ‘pee power’ toilets are at present being installed at a school in Uganda.

Ioannis Ieropoulos and his team hope the technology can be used by aid agencies in disaster zones to supply much-needed “urine-tricity” to refugee camps and it will be able to improve the lives of many people in camps and poor and developing countries where electricity and basic hygiene are a luxury.

“It was extremely important for myself and my team that we were able to transfer our technology outside the lab and make it accessible to the public,” the professor said. “We wanted to explain to them how the use of technology to generate energy from organic waste can be widely used in various sectors.”

Work by the Bristol BioEnergy Centre hit the headlines in 2013 when the team demonstrated that electricity generated by microbial fuel cell stacks could power a mobile phone and turn on the lights of a home.

The microbial fuel cells work by employing live microbes which feed on urine for their own growth and maintenance. The technology that converts the urine into power sits underneath the urinal and can be viewed through a clear screen.

At this year’s festival, the team placed toilets that could serve 40 people at a time, the largest public urinals they have ever built, following the signing of an agreement between the University of West England in Bristol where Ieropoulos is based and the festival’s organisers in May.

At peak times, the urinals set up by Ieropoulos’ team collected up to 1,000 litres of urine which was converted into energy using microbial fuel cells.

The pee power project, the result of a partnership between researchers at UWE and Oxfam, has been presented at the festival for the past two years, but this is the first time it is being promoted to this extent with big screens informing visitors about the project.

While a team of scientists and volunteers explained to the visiting public what can be achieved with the technology another team provided energy for charging mobile phones on the spot.

The scientists are in the process of installing the toilets at a Ugandan school and results are expected soon.

The BioEnergy centre where they conduct their research is known to be one of the world’s most sophisticated and innovative robotics laboratories.

Ieropoulos’ grant income in recent years has come to over £2m and his work has resulted in over 40 peer reviewed publications. He has been invited to author at least four chapters in leading book series, such as Applications of Electrochemistry in Biology and Medicine, Artificial Life Models in Hardware and Living Machines, and has also been invited to present at international conferences, such as CIMTEC’12 and DSTL SOAR Meetings.

The huge Glastonbury music festival has tens of thousands of visitors every year and is an attraction for people all over the world. It receives extensive television and newspaper coverage.

Each year, leading pop and rock artists perform, and the event raises millions of pounds for charity organisations. It is estimated that last year 135,000 people visited. It has not yet been announced how many visited this year.