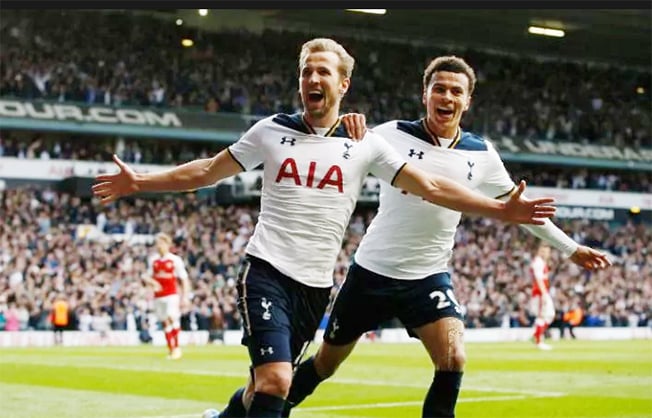 While their rivals have spent vast sums in the summer transfer market, Tottenham Hotspur will enter the new Premier League season relying on virtually the same players who pushed Chelsea so hard in last year’s title race.

It is often said that teams with real ambitions cannot afford to stand still, yet there is a strong argument that Tottenham’s refusal to enter the market place is testament to the quality already at manager Mauricio Pochettino’s disposal.

Tottenham did sell England right back Kyle Walker to Manchester City for around 50 million pounds, but the spine of the side remains from the one that finished with 86 points and 86 goals last season — both club records in the Premier League.

While selling Walker to a title rival raised questions about Tottenham’s aspirations, few clubs would have rejected such huge money for a player who was coming under pressure for his place last season, in Walker’s case from Kieran Trippier.

When last season concluded there were suggestions that the likes of gifted England midfielder Dele Alli, Golden Boot-winning striker Harry Kane and Danish playmaker Christian Eriksen could be prised away by some of Europe’s biggest clubs.

The fact they all seem content to be part of Pochettino’s masterplan means Tottenham could again mount a credible challenge to the big-spenders.

“Why not?” former Tottenham midfielder Micky Hazard told Reuters. “Tottenham have a brilliant first eleven and you wouldn’t swap that for anyone.

“If they could play that every week they would have an unbelievable chance for the title, although we know that is not the case. But I don’t think any of the other clubs at the top will be expecting Tottenham to fall apart this season.”

There certainly appears to be a solidity about Tottenham, with Hugo Lloris in goal and the Belgian central defensive duo of Jan Vertonghen and Toby Alderweireld forming the foundation of a rearguard that leaked only 26 goals last time.

With left back Danny Rose back from injury and the mercurial Erik Lamela returning after missing virtually all of last season, Pochettino should have enough options even if there are no late additions in the transfer window.

There are some concerns for Tottenham, however.

They lack the game-changing options on the bench the likes of Chelsea, Manchester City and Manchester United will have this season, so their margin for error is less than their rivals.

“Chelsea brought on (Cesc) Fabregas, (Diego) Costa and (Eden) Hazard in last season’s FA Cup semi-final when Spurs were dominating,” Hazard said. “Tottenham’s back-up could be stronger. But they won’t panic. One signing would change it.”

The biggest unknown, however, will be the Wembley effect.

With their new ground expected to be ready for next season, they will play this season in the huge national stadium — an arena in which Tottenham have struggled in recent years.

Recreating the atmosphere off the pitch and intensity on it — two key ingredients to their home form last season — will be Pochettino’s greatest challenge.

If they can make Wembley, for all its red seats, feel like home for a season then fourth favourites Tottenham could again be in the top-four mix and perhaps even spring a surprise and land their first English title since 1961.

Movies reel in emotions and stories by the sea