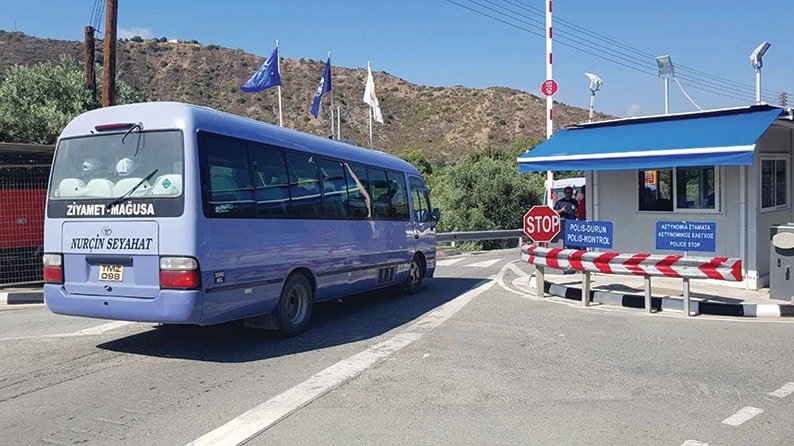 The government was merely honouring a 2009 agreement between the two communities when it allowed a bus convoy of Turkish Cypriots through to the government-controlled areas to attend a commemoration ceremony in their enclave of Kokkina, deputy government spokesman Victoras Papadopoulos said on Wednesday.

It went without saying, he said, that the government condemns the August 1964 bombings of Tylliria by the Turkish air force, the anniversary of which was the reason for the Turkish Cypriots visit.

The announcement comes a day after strong criticism by opposition parties that blasted the government for allowing Turkish Cypriots to pass through the Limnitis-Kato Pyrgos checkpoint to the government-controlled territories to attend a celebration of events that cost the lives of Greek Cypriots.

In total 46 small buses carrying some 900 Turkish Cypriots crossed on Tuesday over from the Limnitis checkpoint to Kato Pyrgos en route to the Kokkina enclave for the annual celebrations of the Tylliria bombing by the Turkish air force in 1964. ‘State’ officials from the Turkish-held part of Cyprus also arrived at Kokkina for the commemoration, including Turkish Cypriot leader Mustafa Akinci, who was transported there by helicopter. A number of Turkish Cypriots also went to the enclave with cruise ships and military boats.

By allowing the convoy to pass through, the government, Papadopoulos said, was honouring the agreement between former president Demetris Christofias and former Turkish Cypriot leader Mehmet Ali Talat “which basically provided for the opening of the Limnitis checkpoint which serves mainly the Greek Cypriots living in the Tylliria region”.

“Those who are against it, if they think differently, that this agreement should be reported and not be in force with all that such an act would entail, then let them say it clearly,” Papadopoulos said.

In 2010, the Tylliria communities welcomed the opening of the Limnitis checkpoint north of Kato Pyrgos which shortened distances to and from Nicosia. Since the crossing opened, Turkish Cypriots pass annually with buses through the north to get to Kokkina on August 8 when the Tylliria bombings are marked.

“In addition, the government wishes to stress that it goes without saying that it condemns the bombings and atrocities against the Greek Cypriots by Turkey in 1964, but also the celebrations of the Turkish Cypriots for such a heinous anniversary,” Papadopoulos said.

But criticism against the government continued on Wednesday too, this time from the youth-wing of socialist party Edek.

In an announcement, it criticised the government for “not only it did not condemn the actions of the Turkish Cypriots and of the occupation authorities but preferred to reward them by saying through (Disy MP Nicos) Tornaritis that Turkish Cypriots have every right to honour their heroes”.

The group was referring to a fake tweet that circulated on social media on Tuesday supposedly by Tornaritis saying: “Turkish Cypriots have every right to be present at the celebrations for the bombing of Tylliria. It is not only us who have heroes. We say no to division.”

Tornaritis said on Wednesday through a Facebook post that he never tweeted such a comment which, he said, shows the “agony” of “those who do not have answers to the questions of the people (and) use fascist methods to convince with their cheap and fake policies”.

The event in Kokkina also sparked a reaction from the Greek foreign ministry that expressed its regret over the celebrations.

“It is with regret that we record the celebrations of the Turkish Cypriot leadership, especially of Mr Akinci himself, on the 53 years from the use of chemical weapons and napalm bombs by Turkey’s air force on the peninsula of Tylliria,” the Greek ministry said. It added that that was the first time that these forbidden chemical weapons had ever been used.

The Turkish foreign ministry condemned Greece’s remarks on Wednesday, dismissing the “baseless and false allegations” over the use of chemical weapons, saying they  “probably reflect a futile attempt to cover up their (Greece’s) feeling of guilt regarding their acts”.

Following inter-communal violence which erupted in December 1963, Turkish Cypriots established a bridgehead at Kokkina in 1964, providing them with arms, volunteers and materials from Turkey.

What happened at Tylliria in August 1964