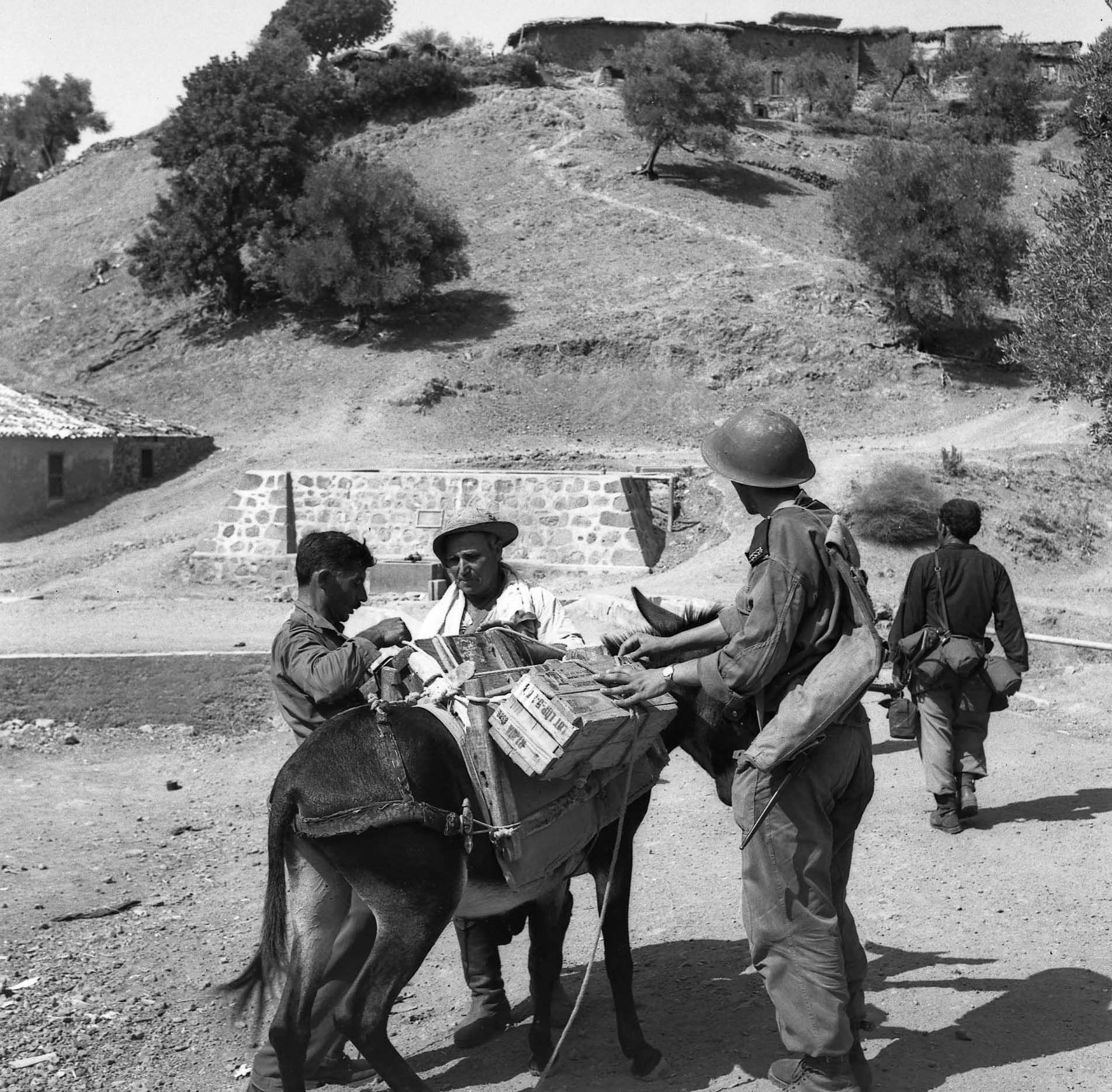 According to the UN secretary-general’s report to the Security Council in September 1964, just before the battle of Tylliria, the Turkish Cypriot bridgehead around Kokkina and Mansoura was considered dangerous by the Cypriot government. It claimed “with some justification” that the Turkish Cypriots had been smuggling arms and men into the bridgehead in order to strengthen their positions.

Turkish Cypriots were occupying the villages of Kokkina, Mansoura, Alevga, Selain t’Api and Ayios Theodoros as well as having defensive positions in the surrounding hills.  Until late July the government forces consisted of only two companies in the area.  The government build-up began in the last days of July and continued until August 7.

On August 3, some 900 national guardsmen were deployed around Kato Pyrgos. By August 4, numbers had risen to 1,500 or so. By August 7, artillery was positioned facing Kokkina and forces were around 2,000. The Turkish Cypriot strength was 500. They had small arms, some mortars and bazookas.

The UN was concerned about the build-up and expressed this to the government. On August 4, they received assurances from the government it had no intention of attacking Turkish Cypriot positions and if it did, it would issue a warning to the UN.

On August 3 as a government boat was patrolling 800 yards offshore of Mansoura, 15 shots were fired from the village. When it reached Kokkina, the boat fired eight shots at small boats in the harbour.  During the evening of August 5, there was an exchange consisting of about 500 shots but the UN brokered a ceasefire.

On August 6, government forces launched an attack supported by mortars from the Greek Cypriot village of Ayios Georgios against Turkish Cypriot positions in the north.

On August 7, they resumed the attack in the afternoon by opening heavy fire on Ayios Theodoros and began to advance on Kokkina. The same evening a government patrol boat shelled Mansoura and Kokkina. Some 70 shells were fired.

At about the same time, four Turkish F100 aircraft flew over Polis in a demonstration of force and fired their weapons out to sea.

On August 7, the Unficyp commander sent a strong written protest to the government and asked that the operation be stopped. Despite the request, the attack continued and by the early hours of August 8, both Mansoura and Ayios Theodoros had been evacuated by the Turkish Cypriots. The fighters retreated to Kokkina and the women and children were taken by Unficyp to Kato Pyrgos where a camp was set up.

Meanwhile the battle continued into August 8 with only Kokkina remaining under heavy bombardment.  The same afternoon, a Turkish F100 began attacking government forces around the village and also around Polis and Kato Pyrgos. It also attacked a government patrol boat, killing five and wounding 13.

Unficyp tried to secure a ceasefire in the middle of the battle to evacuate the women and children from Kokkina but the National Guard refused. It also refused a temporary halt for UN posts to evacuate.

Still on August 8, Turkish aircraft launched new attacks on Pomos, Polis, Kato Pyrgos and other villages in the region. They used machine guns cannons, rockets, bombs and incendiaries. Napalm is an incendiary but the UN report does not use the specific word.

“Throughout the entire battle, Unficyp made strenuous attempts to secure a ceasefire but was continually hindered by the government forces,” the report said.  On August 9, the UN Security Council called for an immediate ceasefire, which the sides complied with as of August 10, though there were numerous minor breaches by both in the ensuing days.

The UN report said that based on government figures, 53 Greek Cypriots were killed in the battle, and 125 injured of which 28 of the dead and 56 of those wounded were civilians.  The report had no figure for the Turkish Cypriot toll.