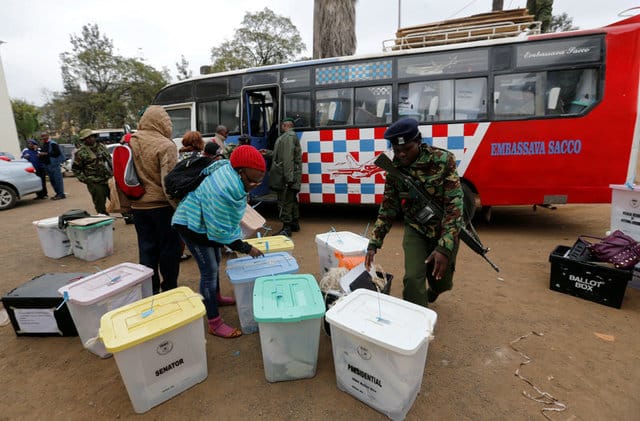 Kenyan opposition leader Raila Odinga said on Wednesday the election commission’s computers had been hacked and fake results posted online to show President Uhuru Kenyatta with a strong lead in what he described as “massive” fraud.

The election commission said Tuesday’s vote was free and fair. It was investigating whether or not its computer systems and vote-tallying database had been compromised but had not had a problem with its passwords, it said.

Odinga’s statement, which is based on his belief that a murdered election commission technician had his identity stolen, raised concerns of unrest over the results in Kenya. The country is East Africa’s leading economy and a regional hub.

Speaking at a news conference, Odinga urged his supporters to remain calm but added: “I don’t control the people”. His deputy Kalonzo Musyoka struck a similar tone and said the opposition might call for “action” at a later date. He gave no details.

Shortly after Odinga spoke, police fired teargas to scatter a group of 100 supporters in the western city of Kisumu, an opposition stronghold. The unarmed men had been chanting “No Raila, no peace”.

They later used live rounds to disperse another group, while a pro-Odinga protester was shot dead by police in a Nairobi slum, witnesses said.

As of 1330 GMT, the election commission website put Kenyatta in front with 54.4 percent of votes counted to 44.8 percent for Odinga – a margin of 1.4 million ballots with 96 percent of polling stations reported.

Odinga published his own party’s assessment of the count on Twitter, saying he had 8.1 million votes against 7.2 million for Kenyatta but published no supporting documentation.

The main local election monitoring group said its parallel vote tally was incomplete so it could not comment on the differing figures. Foreign observer missions declined to comment.

Kenyatta, a 55-year-old businessman seeking a second five-year term, had held a steady lead of around 10 percent since the start of counting after the peaceful vote, the culmination of a hard-fought contest between the heads of Kenya‘s two political dynasties.

Odinga, 72, a former political prisoner and self-described leftist, described the reported hack as an attack on Kenya‘s democracy and published 50 pages of computer logs on his Facebook page to support his claims.

Despite its multimillion dollar electronic voting system, the crucial evidence on voting comes from the paper forms signed at each of the country’s 41,000 polling stations.

Results in each polling station are recorded on a form – known as 34A – that observers from each party must sign. These are then scanned and sent to the election board for posting online.

The measure is designed to ensure the elections cannot be rigged and parties can cross-check results.

On Wednesday morning, the commission said it had received 28,000 forms and was working to make all forms public.

The Kenya Human Rights Commission, a well-known non-governmental organisation, said it had discovered some discrepancies between provisional results on the election commission website and the paper forms.

It cited five examples, including a polling station in western Nandi county where the electoral board’s website recorded 439 rejected votes but the paper form only showed four.

In 2007, tallying was stopped and the incumbent president declared the winner, triggering an outcry from Odinga’s camp and waves of ethnic violence that led to International Criminal Court charges against Kenyatta and his now-deputy, William Ruto.

The cases against them collapsed as witnesses died or disappeared.

In 2013, Odinga took his concerns to court. This time, he invoked the unsolved torture and murder of top election official Chris Msando days before the vote to justify his rigging fears.

“We fear this was exactly the reason Chris Msando was assassinated, so this could happen,” he said.

Kenya‘s shilling firmed and bond prices rose on early results, before retreating in the wake of the claims by Odinga, seen as less pro-business than Kenyatta.

“The most important issues are ahead of us: Does Odinga concede peacefully? His initial rhetoric suggests there is a risk he does not.”