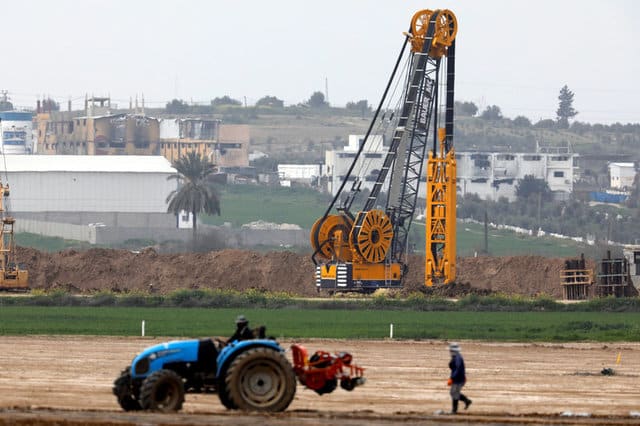 File photo: Heavy machinery can be seen at work along Israel's border with the Gaza Strip, as seen from Kfar Aza, southern Israel

Israel warned Gaza’s Hamas rulers on Thursday not to try to foil its construction of a border wall designed to stop tunnels between the two sides.

It said it had mapped militant emplacements hidden under civilian sites in the Palestinian enclave that may be attacked in any new war.

The unusually detailed Israeli threat followed a rocket launch on Tuesday which caused no damage in Israel and went unclaimed by Gazan groups. Israel responded with an air strike on a Hamas facility that medics said wounded seven people.

Such flare-ups have been relatively rare since the last Gaza war, in 2014, with Hamas mostly holding fire and reining in smaller militant factions.

But as Gaza’s poverty and political drift deepens, both sides worry another conflict could erupt.

In September, Israel went public with a sensor-equipped underground wall being planted on its side of the 37 mile- (60 km) long border, a counter-measure developed after Hamas fighters used tunnels to blindside its troops during the war.

Israeli media published new disclosures by the military on Thursday about the project, costing $1.1 billion and to be completed within two years under an accelerated schedule.

Israel has described it as a territorial counterpart to its Iron Dome short-range rocket interceptor, capable of blunting Hamas’s limited means of challenging its superior armed forces.

“I think the other side will have to re-evaluate the situation in view of the barrier’s construction,” Haaretz newspaper quoted the chief of Israel’s southern command, Major-General Eyal Zamir, as saying in the media briefing.

The military also published aerial photographs and coordinates of two Gaza buildings that it said Hamas was using as cover for tunnel networks. One of these, it said, is a Hamas member’s family home, linked to a mosque by a secret passage.

“These two targets, as far as I’m concerned, are legitimate military targets, and in the event that a new war begins, anybody in them is endangering himself, his family, and the responsibility (for their wellbeing) will fall on Hamas,” Zamir said in a separate briefing to foreign journalists.

A Hamas spokesman Fawzi Barhoum called the Israeli statements “lies and fabrications that aim to damage the image of the Palestinian resistance and justify the mass killing of thousands of Palestinians civilians”.

More than 2,100 Palestinians, most of them civilians, were killed in the 2014 war, according to the Gaza health ministry. Sixty-seven Israeli soldiers and six civilians in Israel were killed.

A new buffer zone within Israel’s territory, dozens of metres (yards) in width, will afford it extra time to respond by depriving Hamas tunnelers of targets on the frontier.

Israeli media said on Thursday that the military also planned to build an underwater barrier in the Mediterranean to prevent infiltration from Gaza by sea.