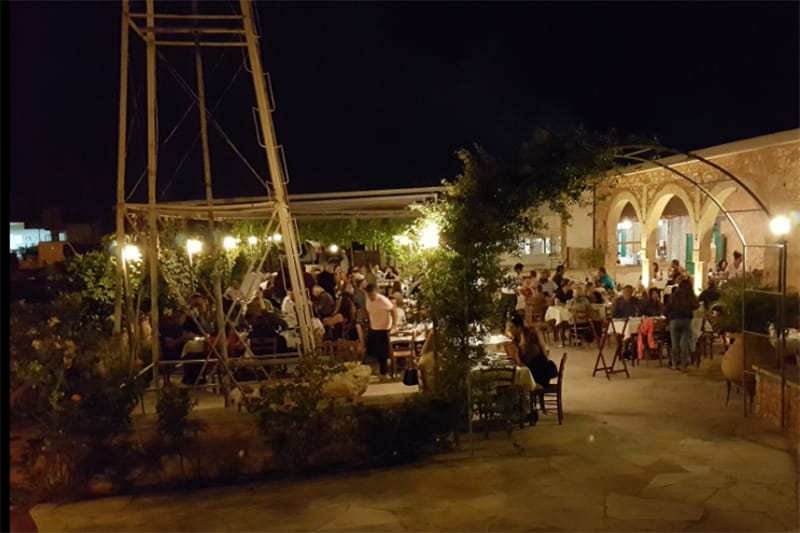 It had been a long day at the beach in Ayia Napa and that sure built up an appetite! Rather than take the long drive home and then eat we decided to stop off at a quaint little restaurant in the quiet village of Sotira. My partner had previously tried it and guaranteed it would be a treat. With this cast iron seal of approval, how could we not?

About five minutes off the highway, the restaurant isn’t difficult to find. The old building, built in 1934, was initially a home but in 2008 it was renovated by the Mousikos family to serve as a restaurant. You’ll know you’re there when you see the windmill that acts as a landmark. We called ahead to make sure there would be a table for us and were told they could hold a table up until 7.30 otherwise it would just be given away. When we arrived, the restaurant was completely empty, apart from the 4-5 waitresses and the owner standing around.

Having already decided we were going to order the meze we merely skimmed through the menu mainly just to have a look at the drinks. We ordered cold beers. I’ve been to places before and ordered a cold beer and it has come only slightly chilled but to my delight here the beer was actually cold! Perfect. And just what you need at the end of a long, hot summer day. Shortly after, the table was lit up with an array of dips and a beautiful, colourful fresh salad.

Out came the warm, fresh, homemade bread that was almost too hot to touch! We tore it apart and started devouring the dips! What came next for me was the ‘pièce de résistance’, baked homemade halloumi rolled in sea salt. It was somehow ever so slightly firm on the outside yet soft, fluffy and light on the inside; most definitely one of the tastiest versions of halloumi I have ever tried! Seeing as many ingredients for the meze are home grown, the freshness of what came was wonderful. A real treat for the palette! From the eggs with asparagus, to the hand cut chips topped with oregano, the homemade, home grown element made the perfect recipe for tasty food.

I like to think that the little things make all the difference when it comes to presentation. While most dishes were served as you would expect of a meze, on a little plate or in a small dish, what really stood out was the kleftiko, brought out in a little clay pot. Piping hot, it was clearly just out of the traditional, clay built oven that we had walked past on the way in. The meat literally just fell off the bone so we knew, even before sampling it, that the kleftiko was going to be fantastic. It didn’t disappoint!

As the food continued to come we could see why we were told that a table couldn’t be held past 7.30pm. Slowly, but surely, the whole restaurant was packed! Bearing in mind that it was a Wednesday evening, that is pretty impressive for a village taverna. Another thing I noticed was that most of the customers were locals. The waitresses remained polite and efficient, and despite the restaurant filling up the service wasn’t compromised.

Finally all the food had stopped coming. We were so full that I actually asked the waitress if there was anything else because we couldn’t have eaten another bite. However, there’s always that little bit of extra room for dessert. Not long after the plates had been cleared we were brought fluffy, honey-covered pourekkia (sweet pastry with anari, blossom water and cinnamon filling) and some fresh fruit.

We sat at the table for a while after all the food was finished, just taking in the charm of the place and enjoying the breeze. This is truly a fantastic little gem of a taverna and if you are looking for high quality, tasty, traditional meze and good service then Mousikos taverna is a must!

Bank of England says will not change animal-fat banknotes

Heading to Napa for an international sound