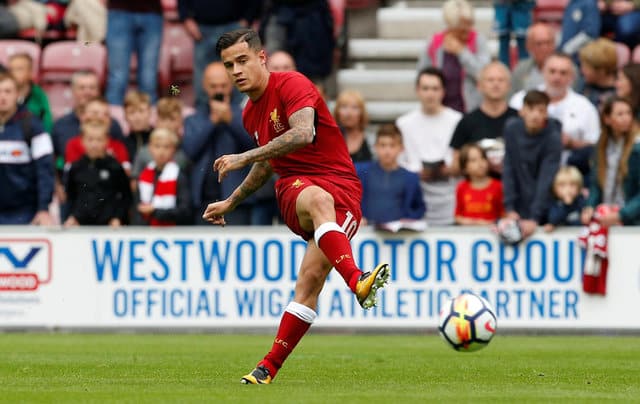 Philippe Coutinho is wanted by Barca, but Liverpool say he is not for sale

Barcelona target Philippe Coutinho has submitted a formal transfer request Liverpool, despite the Premier League club stating they will not release the player, a British newspaper reported on Friday.

After reports that Liverpool had rejected a second bid worth 100 million euros from Barcelona, who had already been rebuffed last month in an 80 million offer for the 25-year-old, the club’s ownership group released a statement.

“We wish to offer clarity as regards our position on a possible transfer of Philippe Coutinho,” Fenway Sports Group said in a statement on the Merseyside club’s official website. www.liverpoolfc.com.

“The club’s definitive stance is that no offers for Philippe will be considered and he will remain a member of Liverpool Football Club when the summer window closes.”

But shortly afterwards, the Liverpool Echo reported that Coutinho had sent an email to Liverpool’s sporting director Michael Edwards expressing his wish for a move.

Liverpool did not respond to a request for comment.

In recent days, Liverpool’s manager Juergen Klopp has repeatedly insisted the Brazilian was not for sale.

Klopp told reporters on Friday that Coutinho would miss Liverpool’s opening Premier League game against Watford on Saturday because of a back injury and is doubtful for Tuesday’s Champions League qualifier first leg in Hoffenheim.

Klopp said Coutinho had not trained for a week because of his injury.

“No he’s not available. He’s not been in training since last Friday. He’s a doubt for Tuesday unfortunately,” he said.

Klopp was asked by reporters about Coutinho’s position at the club given persistent media reports that the midfielder would like to move to Barcelona.

“I can’t keep players happy, if you are not happy you won’t be if I say be happy. It’s not about this at the moment. For me the bigger issue is that he is unable to play,” he said.

Coutinho’s situation has dominated the lead-up to Liverpool’s opening game at Vicarage Road.

He is one of four Liverpool players, along with Adam Lallana, Nathaniel Clyne and Daniel Sturridge, who will miss the Watford game through injury although Klopp said Sturridge should be fit for Hoffenheim.

The statement on Coutinho from Liverpool’s owners is the latest blow for Barcelona in their plans to rebuild their squad after Neymar’s move to Paris St Germain for 222 million euros weakened their attack.

Barca have also attempted to lure French forward Ousmane Dembele to the club from Borussia Dortmund but had their bid, reported by German media to be about 100 million euros, rejected by the Bundesliga side.

The Catalans, who only managed to win the King’s Cup last season in a disappointing campaign, face Liga champions Real Madrid on Sunday in the first leg of the Spanish Super Cup.