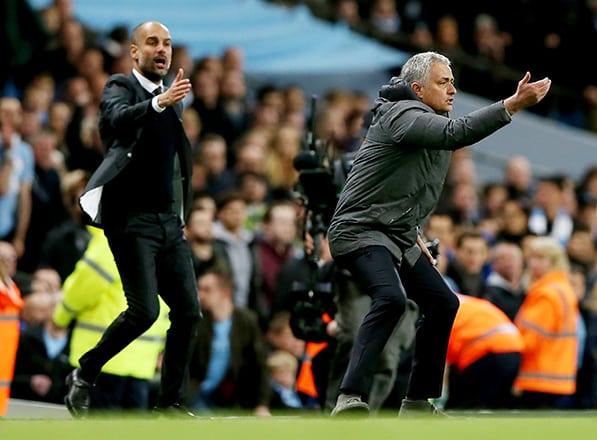 A year ago, the buzz around the Premier League was focused on the arrival in Manchester of Pep Guardiola and Jose Mourinho as managers of City and United.

The buzz may have gone but the biggest question before the coming season remains whether two of the highest-profile managers in the world can deliver on all the hype surrounding them.

The focus may have been on Manchester last season, but the title went to the capital and the run-in was a battle between two London clubs. Third-place City finished 15 points behind champions Chelsea, with Tottenham Hotspur in second place.

Both Guardiola and Mourinho could argue that their first seasons were transitional campaigns. New faces had to settle in and the legacy players had to get used to the methods of their high-profile bosses.

But after a close-season in which both managers have invested heavily in new players, United are now Mourinho’s team and City have been created by Guardiola. No excuses will be accepted by success-hungry fans – silverware is now expected.

United, without a league title since 2013, certainly appear to have filled important gaps in their squad.
Romelu Lukaku looks to be the physical presence with a goal-scoring pedigree needed to replace Zlatan Ibrahimovic in attack. Sweden’s Victor Lindelof looks a good partner for Eric Bailly in the centre of defence and Nemanja Matic is a proven asset on the defensive side of midfield duties.

£89 million man Paul Pogba will be expected to finally deliver on his undoubted potential in a more attacking role, while 19-year-old Marcus Rashford continues to excite as he develops.

The big question is whether Mourinho can forge a consistent starting side out of his squad after a year in which injuries hampered any attempt at continuity.

City also look stronger on paper. Brazilian Ederson is believed to be the answer to their goalkeeping troubles and Portugal’s Bernardo Silva is a classy addition to the midfield.

The full-back position has been another problem area and Kyle Walker, signed from Spurs, is a clear upgrade at right-back and France international Benjamin Mendy from Monaco an improvement on the opposite flank.

In contrast, the London clubs have been relatively quiet in the transfer market, apparently adopting the approach of not trying to fix what isn’t broken.

There are question marks over Chelsea which may only be answered by the end of the transfer window.

The squad is surprisingly small, given the number of players Chelsea have loaned out to other clubs, and the departure of Matic leaves manager Antonio Conte hoping France’s Tiemoue Bakayoko can quickly adapt after his arrival from Monaco.

With Diego Costa widely reported to be leaving the club, the main striker is Alvaro Morata, brought from Real Madrid, and while he is an undoubted talent, he is untested in English football.

Spurs are confident Kieran Trippier can replace Walker at right-back, but while they have been strongly linked with Everton midfielder Ross Barkley they have yet to bring in any new faces.

Manager Mauricio Pochettino has said he is looking for new players but, as Chelsea and Leicester showed in the past two campaigns, there are benefits to having a consistent line-up.

Arsenal’s biggest decision of the summer was opting to stick with manager Arsene Wenger and he has, so far, managed to keep Alexis Sanchez and Mesut Ozil at the club.

The Gunners showed signs of improvement at the end of last season and if they can keep that form – with new forward Alexandre Lacazette from Lyon giving them fresh firepower – their frustrated fans might enjoy an upturn in results after their worst finish in 21 years.

Liverpool have brought in speedy Egyptian winger Mohamed Salah from AS Roma and Scotland full-back Andy Robertson from Hull but have not made the kind of acquisitions that would transform their chances of a first title in the Premier League era.

Indeed, the major transfer activity on Merseyside has been conducted by Everton, who hope their investments, along with the return of Wayne Rooney, can help them break into the top six.