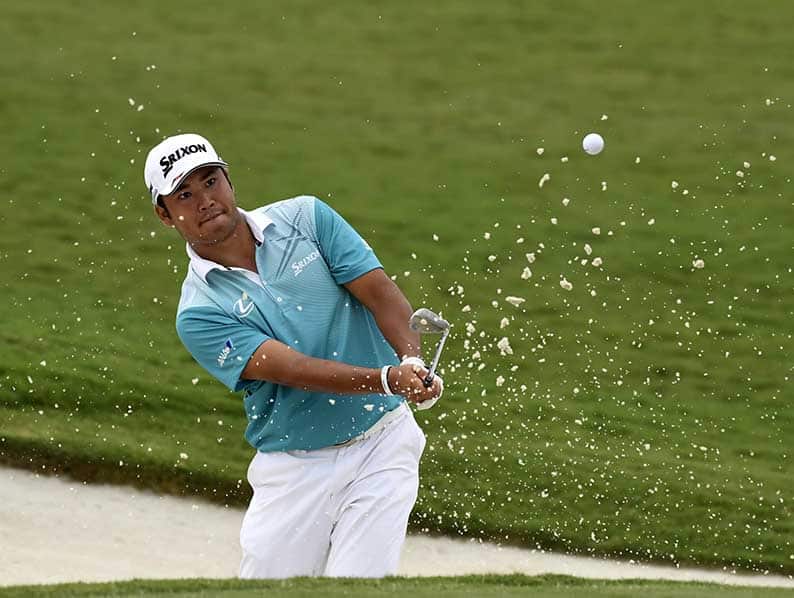 Hideki Matsuyama charged into position to become the first Japanese man to win a major after joining Kevin Kisner in the second-round lead on eight-under-par at the PGA Championship in Charlotte, North Carolina late on Friday.

Matsuyama took advantage of greens softened by an afternoon storm, reeling off five birdies in a six-hole stretch with a series of pinpoint approach shots to card a seven-under-par 64, a course record in light of the redesign of Quail Hollow before the championship.

He and American Kisner, who earlier fired a near-flawless 67, are two strokes ahead of Australian Jason Day (66), back in form after a recent flat patch.

“I was grateful for the rain delay because I was getting tired. I was able to lay down in the locker room and get some rest,” world number three Matsuyama said.

“I think what was making me tired was I wasn’t hitting my driver like I wanted to. I was hitting fairways but I wasn’t getting the crisp contact that I was hoping for with my driver.”

Matsuyama, the pressure of an entire country on his shoulders, said he did not know whether he would be nervous over the weekend.

“This is my first experience leading a major, or tied for the lead after 36 holes. And so being a new experience, maybe I’ll be a little nervous, but on the other hand, I’m looking forward to the weekend and seeing how I do.”

Kisner, meanwhile, used his ‘Texas wedge’ from off the green to sink a 47-foot putt at the par-five seventh — his 16th hole — and vault clear of the field, at least for a while.

The 33-year-old from South Carolina has won twice on the PGA Tour, and has also lost four times in playoffs.

Recent hard work tweaking his swing is paying off.

“I’ve always fought a push to the right and got sick and tired of it,” he said. “Hitting fairways are key.

Day, the 2015 champion, ran down the final fairway to finish before darkness completely enveloped the course, the result of the earlier near two-hour stoppage that prevented 26 players from completing their round.

“It was nice to be able to drive the way I did today and set myself up with the opportunities and being able to capitalise on those opportunities felt even better,” he said. “Because they were the two things that were missing pretty much the whole year is my driving and my putting, and being able to combine that today, just felt like the old days, which is only last year.”

Further back, the hopes of championship favourite Rory McIlroy and grand slam seeker Jordan Spieth are hanging by a thread, 10 and 11 strokes behind respectively.

The second round will resume on Saturday at 7.30 a.m. local time (1130 GMT). American Chris Stroud is best placed among those yet to complete the round, five-under with five holes left.