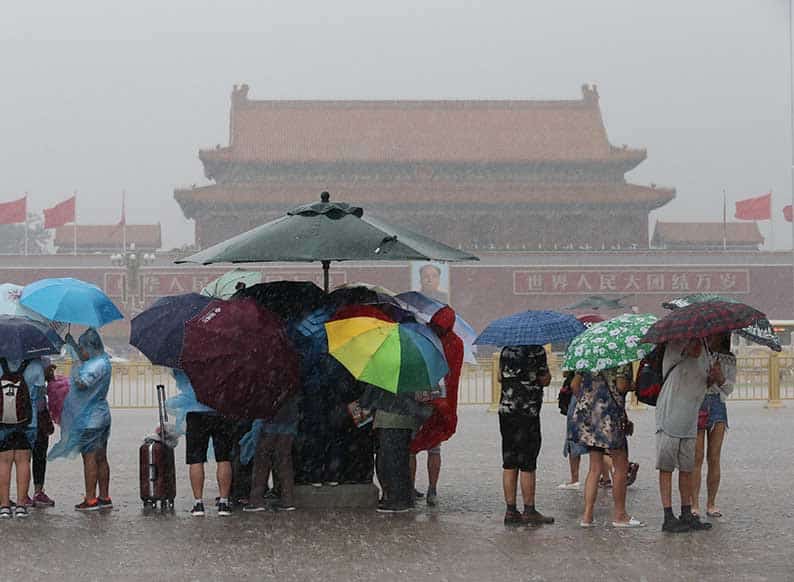 Tourists hold umbrellas as they visit Tiananmen Square during a rainstorm in Beijing, China

Storms swept across Beijing and southeastern China on Saturday, disrupting thousands of flights and flooding towns, while authorities warned that rain and wind could cause landslides in the area where a 7.0-magnitude earthquake struck this week.

Beijing authorities raised their weather alert level to “orange” from “yellow” early in the afternoon, warning against lightning, hail, wind and as much as 70 mm of rain, threatening flash floods in mountainous areas.

By early afternoon rain subsided in some parts of the capital, but nine roads were still flooded and 171 tourist sites were shut, the official news agency Xinhua said.

At Beijing International, one of the world’s largest airports and China’s busiest, more than 1,600 flights were listed as cancelled since midnight and over 300 were delayed, the website of Beijing Capital International Airport Co Ltd showed, urging travellers to check for flight updates.

Air China Ltd said on its Weibo social media account that about 225 of its flights in and out of the capital had been cancelled by 4 p.m. (0800 GMT).

Torrential rainstorms are fairly frequent in Beijing in the summer months, often causing long delays at the airport.

One user of China’s Twitter-like Weibo said she had been stuck at the airport for eight hours waiting for a flight home.

“There are no free seats, I’m having to sit on the floor, I’m jetlagged and I’m really tired,” said the user, who goes by the handle ‘Vivian not soymilk’.

Other airports affected by the downpours included Shanghai, Nanjing in Jiangsu province, Hangzhou in Zhejiang along the Yangtze River delta.

The others were in northern regions: Shijiazhuang in Hebei, Taiyuan in Shanxi, Lanzhou in Gansu, Xining in Qinghai and Yinchuan in Ningxia.

In a statement, China’s National Meteorological Centre cautioned rescue crews working in Jiuzhaigou, in the southwestern province of Sichuan, to be on alert for landslides and lightning.

Heavy rain was expected across south-eastern China on Saturday, it said.

Widespread flooding hit two areas, Xiangbei and Xiangxi in the southern province of Hunan, Xinhua said. Rainfall across the province ranged from 100 mm to 200 mm.

The extreme weather followed a tornado that struck Inner Mongolia on Friday, killing five people, injuring more than 50 and destroying homes in a major city.

Lefkara calls on president to help with derelict hotel