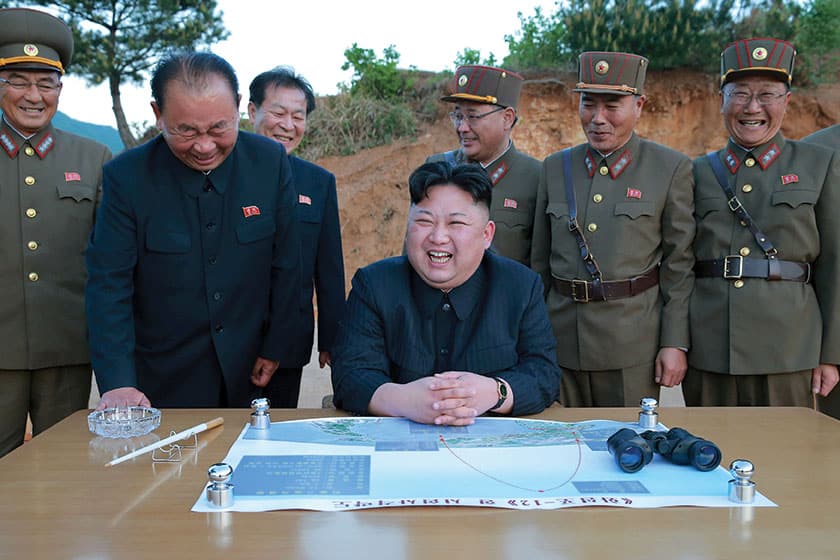 “I’m not saying we wouldn’t get our hair mussed, Mr President, but I do say not more than ten or twenty million dead, depending on the breaks.” So said General ‘Buck’ Turgidson, urging the US president to carry out a nuclear first strike, in Stanley Kubrick’s 1963 film Dr Strangelove: or How I Learned to Stop Worrying and Love the Bomb.

But nobody in Kubrick’s movie talked like Kim Jong-un (“American bastards would be not very happy with this gift sent on the July 4 anniversary,” he crowed, celebrating North Korea’s first successful test of an ICBM). They didn’t talk like Donald Trump either (“North Korea best not make any more threats to the United States. They will be met with fire and fury like the world has never seen.”)

Kubrick’s film came out the year after the Cuban missile crisis, when the world went to the brink of nuclear war after the Soviet Union put nuclear missiles into Cuba to deter an American invasion. It was a terrifying time, but neither US President John F Kennedy nor the Soviet leaders used violent language. They stayed calm, and carefully backed away from the brink.

So Kubrick’s fictional leaders had to stay sane too; only his generals and civilian strategic ‘experts’ were crazy. Anything else would have been too implausible even for a wild satire like Strangelove. Whereas now we live in different times.

Trump may not understand what his own words mean, but he is threatening to attack North Korea if it makes any more threats to the United States. That’s certainly how it will be translated into Korean. And Pyongyang will assume that the US attack will be nuclear, since it would be even crazier to attack a nuclear-armed country like North Korea using only conventional weapons.

Maybe the American and North Korean leaders are just two playground bullies yelling at each other, but even in their more grown-up advisers it sets up the train of thought best described by strategic theorist Thomas Schelling: “He thinks we think he’ll attack; so he thinks we shall; so he will, so we must.” This is how people can talk themselves into launching a ‘pre-emptive’ or ‘preventive’ nuclear attack.

Is this where the world finds itself at the moment? ‘Fraid so. And although a nuclear war with North Korea at this point wouldn’t even muss America’s hair – the few North Korean ICBMs would probably go astray or be shot down before they reached the US – it could kill many millions of Koreans on both sides of the border.

A million or so Japanese might die as well (that would depend on the fallout), and a few tens of thousands of US soldiers in western Pacific bases (from targeted strikes). Indeed, as the scale of the potential disaster comes home to North Korean strategists, you can see them start to play with the idea of a “limited nuclear war.”

North Korean planners have announced that they are “carefully examining” a plan for a missile attack on the big US base on Guam. In that way they could “signal their resolve” in a crisis by only hitting one isolated American military target. Their hope would be that such a limited attack would not unleash an all-out US nuclear counter-attack that would level North Korea.

‘Limited’ nuclear war typically becomes a favourite topic whenever strategists realise that using their cherished nuclear weapons any other way means unimaginable levels of death and destruction. It has never been credible, because it assumes that people will remain severely rational and unemotional while under attack by nuclear weapons.

Thinking about limited nuclear war, while unrealistic, is evidence that the planners are starting to get really scared about an all-out nuclear war, which is just what you want them to be. Nevertheless, we are entering a particularly dangerous phase of the process, not least because the other two major nuclear powers in the world, China and Russia, both have land borders with North Korea. And neither of them loves or trusts the United States.

What “process” are we talking about here? The process of coming to an accommodation that lets North Korea keep a nuclear deterrent, while reassuring it that it will never have to use those weapons. Because that’s what these North Korean missiles and nuclear warheads are about: deterring an American attack aimed at changing the regime.

They couldn’t be about anything else. North Korea can never have enough missiles to attack the US or its local allies and survive: it would be national suicide. But it can have enough of them to carry out a “revenge from the grave” and impose unacceptable losses on the US if it attacks North Korea. Deterrence, as usual, is the name of the game.

US Secretary of State Rex Tillerson briefly said that the US was not seeking to change the North Korean regime last week, although he was almost immediately contradicted by President Trump. In the long run, however, that is the unpalatable but acceptable way out of this crisis. In fact, there is no other way out.

Vassiliou: there is no new strategy for talks