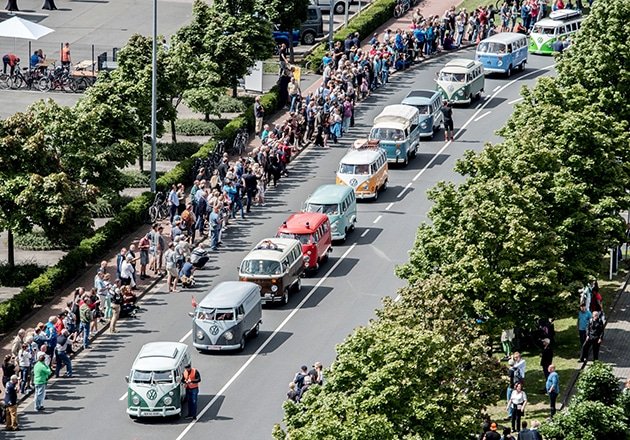 If you are of ‘a certain age’ you undoubtedly remember the iconic VW ‘bus’ which had its heyday in the 1960s and ‘70s.

The Volkswagen Type 2, known officially (depending on body type) as the Transporter, Kombi or Microbus, or informally as the Bus (in the USA) or Camper (UK), was introduced in 1950 as the brand’s second model, derived from the first, the Type 1 (Beetle).

There was plenty of nostalgia for VW Bus fans from all over Europe last weekend in Germany as they gathered to celebrate at a huge open-air party in the grounds of Volkswagen’s Commercial Vehicles’ Hannover plant.

Prior to the finale there was a convoy of around 350 buses of all six vehicle generations from Wolfsburg to Hannover, where the T-series (as it is now known) is made today. The event was the final highlight of the four-day VW Bus Summer Festival in Wolfsburg’s Allerpark.

Members of the Board of Management and Works Council, Hannover Mayor Stefan Schostok, Hannover 96 Football Club President Martin Kind (in the club-branded ‘Alte Liebe’ T2) and stars of stage and screen took part in the parade. The convoy symbolised the 1956 relocation of T-series production to Hannover, where the Transporter has been built ever since.

Dr Eckhard Scholz, Chief Executive Officer of the Volkswagen Commercial Vehicles brand, led the way driving his own 1965 T1 and then greeted the fans in front of the Stocken factory: “It was a fantastic experience to drive to the Hannover production site with so many proud VW Bus owners in order to celebrate the conclusion of the VW Bus Summer Festival here with even more fans. Our VW Buses are more than just a means of getting from A to B. They are part of a wonderful lifestyle feeling that constantly travels with you – and has done so across every vehicle generation. This easy-going lifestyle feeling could also be felt throughout the entire festival. It was simply lovely.”

Many fans also took the opportunity to look at the many T-series collector’s items and recounted their own tales and experiences relating to all things Bus, for every vehicle tells its own interesting story.

Bertina Murkovic, Deputy Chair of the Works Council said: “VW Buses have a cult status, which the festival has shown once again. Our vehicles opened up Europe and the world to whole generations.

This unique feeling of freedom travels with you in every VW Bus to this day. It is the VW Bus fans together with the many company employees that have made it what it is today: the greatest and most popular multi-purpose vehicle in automotive history.”

The Mayor of Hannover said: “It was enormous fun to drive in the VW Bus parade to Hannover and then to celebrate this festival together with lots of fans at the Stocken production site. The VW Bus has not only been safeguarding thousands of jobs here for generations, but all around the world it also stands for ‘Made in Hannover’.

What is really impressive is that the VW Bus has been repeatedly reinvented over the decades and for that reason is so popular with fans of every age. That was particularly noticeable at the festival again today.”

History
Only two models were offered when it was first produced: the Kombi (with two side windows and middle and rear seats that were easily removable by one person), and the Commercial. The Microbus was added in May 1950 and was joined by the Deluxe Microbus in June 1951.

It was one of the first ‘forward control’ vans in which the driver was placed above the front wheels. Being rear-engined was a bit of a disadvantage because it could not easily be loaded from the rear as the engine cover intruded on the interior space, but it was advantageous in terms of traction and interior noise.

As one of the forerunners of modern cargo and passenger vans, the Type 2 gave rise to forward control competitors in the United States in the 1960s, including the Ford Econoline, the Dodge A100, and the Chevrolet Corvair 95 Corvan, which adopted the Type 2’s rear-engine configuration.

Like the Beetle, the van has received numerous nicknames worldwide, including the ‘microbus’, ‘minibus’, and – because of its popularity during the counterculture movement of the 1960s – ‘Hippie van/wagon’. It still remains iconic for many hippies today.