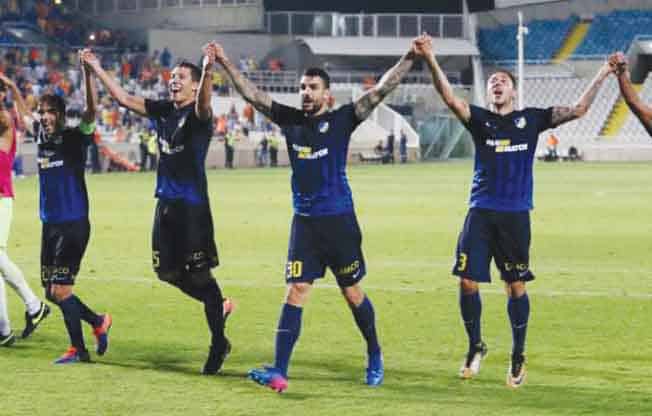 The Nicosia giants celebrate beating FC Viitorul in the previous round, leaving them just two games away from a place in the Champions League group stage

Apoel host Slavia Prague at the GSP Stadium on Tuesday night in the first leg of their Champions League playoff round tie, aiming to give themselves a lead to protect ahead of next week’s return game in the Czech Republic.

Rehired in unexpected circumstances following Apoel’s third round first leg loss to Romania’s FC Viitorul, new manager Giorgos Donis earned the plaudits after inspiring the team to a 4-0 extra-time win in the second leg to see the Nicosia club through to the playoff.

In last week’s Cyprus Super Cup against Apollon, the Greek manager made eight changes in an attempt to find out more about his new team, but it was not a positive audition for most as Apoel lost 2-1.

The big positive for the manager is that star winger Giorgos Efrem looks back to full fitness, following up his late cameo against Viitorul – where he scored in extra-time – by hitting the opener against Apollon and getting 68 minutes under his belt.

Slavia Prague have invested heavily this transfer window in a bid to get the club back into the promised land of the Champions League for the first time since the 2007-08 season.

They have also managed to make two new additions since the third qualifying round, bringing in Ukrainian defender Eduard Sobol on loan from Shakhtar Donetsk and former Fenerbahce winger Miroslav Stoch.

The latter two have made the trip to Nicosia, along with Jakub Hromada and Jan Sykora, who were doubts going into the game, but defender Simon Deli will miss out due to a knock.

Slavia boss Jaroslav Silhavy, just before setting off for the island, told journalists “it is clear that the match in Cyprus is the first half (of the tie)” but was in a confident mood, adding: “I believe we will get a good result”.

Midfielder Tomas Soucek tried to play down the Nicosia heat issue, saying: “We are expecting high temperatures but we are ready. We drank plenty of water in the week, we hope we can manage it”.

Apoel will not be in the best of spirits following the Super Cup defeat, but Donis’ men will be hoping to use their emphatic comeback win against Viitorul as their guide for Tuesday’s clash.

In the last two seasons, Apoel have fallen at the playoff stage. On both occasions, against Astana at the start of the 2015/16 season and Copenhagen in 2016/17, Apoel could only manage 1-1 home draws following 1-0 away defeats.

Playing the first match of a two-legged tie at home is traditionally more difficult but Apoel will be hoping that they can reverse their fortunes of the last two seasons with a win on Tuesday.

As ever, a big local crowd is expected at the GSP Stadium for the 9.45pm kick-off, with the fans hungry to return to Europe’s top club competition.