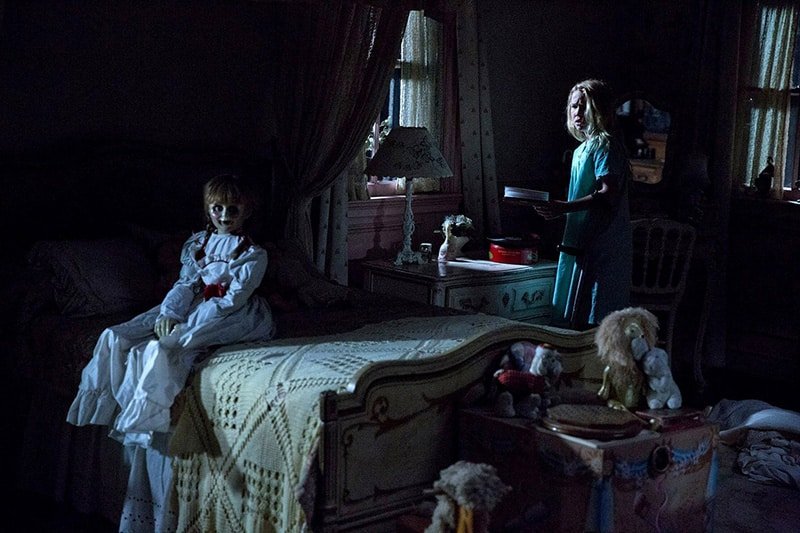 Looks like the journey/destination problem in horror has been solved, or at least resolved. The problem is endemic to ghost stories – slasher movies don’t suffer from it – and the snag, simply put, is that the journey is more interesting than the destination. As long as the ghosts are ambiguous, potentially lurking (or maybe not!) in every dark corner and deserted room, all is spooky. After the ghouls have shown their hand, however, once the jig is up and everything is out in the open… well, what do you do?

Nothing is scarier than uncertainty, yet scary movies haven’t always made use of that. The big horror franchise of the early 00s was Saw, which left absolutely nothing to the imagination; it gave way to Paranormal Activity, which – partly for budgetary reasons – went in the opposite direction. Nowadays we have The Conjuring, which spun off into Annabelle, and now comes a prequel called Annabelle: Creation – but the problem remains much the same. Here’s a doll which is obviously creepy (it looks like a ventriloquist’s dummy, with old-fashioned pigtails adding to the air of hideous mismatch); here’s a bunch of little girls in a house with the memory of a tragedy, the death of another little girl. We all know what’s coming: the doll will reveal some ghostly spirit related to the death of the girl. But when does the waiting game end – and what happens when it does?

The answers, it turns out, are ‘about halfway through’ and ‘all hell breaks loose’, firmly resolving the journey/destination problem. The second answer, in particular, isn’t a given. Some recent horrors (Before I Wake, say) have been compassionate: the ghost could be benign, or asking for help, or trapped in some ghostly netherworld. (I still think Insidious had the best idea, shifting to a whole other realm when the spooks came out.) Annabelle: Creation, however, is unequivocal: from the moment when young Janice (Talitha Bateman) asks “What do you need?” and the dead little girl reveals a demon who roars “Your soul!”, the gloves are off and the special effects get increasingly freaky. This, I suspect, is the shape of things to come: Paranormal Activity in the first half, Saw in the second.

Swedish-born director David Sandberg has form: his debut was Lights Out, a scary film about a spirit that only appeared in the dark which became progressively less scary as the spirit became more brazen, also appearing in the daytime and doing physical things like scratching its name on the linoleum. Annabelle: Creation also deflates rather badly in the second hour – but it’s better than Lights Out, for two reasons. First, it has the budget to be quite spectacular, in a gross-out way, when the demons declare all-out war: one bit in particular, with a man’s fingers splayed out grotesquely one-by-one as he’s forced to let go of a crucifix, has the kind of imaginative sadism one associates with the old prosthetic effects of the 80s and 90s. Second, the build-up is superbly crafted, not just the hints of Something There – lights blink, a dumbwaiter opens by itself, an out-of-focus figure approaches at the bottom of the frame behind Janice – but the ambience in the house and the relationships between the girls, overseen by a friendly nun named Sister Charlotte (Stephanie Sigman) and the owner of the place, a mournful toymaker with an invalid wife.

I can think of objections to Annabelle: Creation. The stiflingly simplistic Good vs. Evil religiosity, for instance (the demon doll has been locked away in a closet, its walls papered over with Biblical passages). The distracting franchise feel, both in the ending – which links up with the original Annabelle – and, for instance, in a brief irrelevant photo of a Romanian convent with a ghostly nun, possibly teasing next year’s The Nun. One could even wonder if it might be traumatic for child actors to venture into such twisted territory, even in the name of ‘make-believe’; you can’t put a kid in a sexual situation in a movie, but having them possessed by murderous demons is apparently okay.

All true – yet the film simply works. Sandberg’s use of mirrors, his control of the frame, his eerie lighting (with Belgian director of photography Maxime Alexandre, a horror specialist) are all exemplary; unlike Annabelle – a silly, shoddy horror that surprised everyone by becoming a huge hit – the prequel has coherent plotting, strong atmosphere, good performances. It’s not going down as a masterpiece of the genre (watch the arty recent ghost story I Am the Pretty Thing That Lives in the House for a film with a better claim to that title) but, for popcorn-munching multiplex mayhem, it’s diverting enough. The journey is gripping in Annabelle: Creation. Then the destination is lurid nonsense, but I guess that’s inevitable.

Apoel hoping to make it third time lucky in playoff