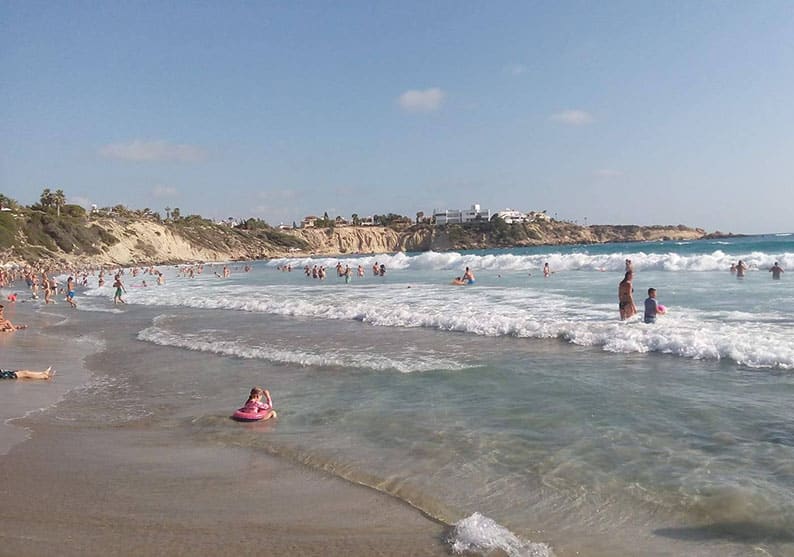 PAPHOS lifeguards have reached breaking point they said on Monday with beaches full to bursting with tourists and locals, and are desperate for extra staff and equipment, which they say they were promised by the government.

Mathaios Mathaiou, president of the Paphos Lifeguards’ Association told the Cyprus Mail that more staff and more equipment was needed urgently, before a disaster happens and someone loses a life.

“We are appealing to the authorities to step in and help us before it’s too late,” he said, adding that they only have half the number they need.

Over the long weekend, the main holiday period in Cyprus, locals and tourists have flocked to the beaches, stretching staff to breaking point, he said.

In addition, he said that the jet ski used by lifeguards at Coral Bay beach, a blue flagged beach and one of the most popular spots on the island, has been broken and out of service for the last ten days, remaining idle and yet to be fixed.

“We have had many incidents during the last few days where we have had to rescue people. At Coral Bay today [Monday], two children, British tourists aged 9 years and 12 years, were rescued by the lifeguard there,” he said.

He added that although the children were saved, their parents drove them to hospital to be checked by medics as both were in shock and crying uncontrollably.

He also said that on Sunday, also at Coral Bay, a British tourist in his thirties was saved from drowning by another swimmer at 7pm, one hour after the lifeguard left the beach at the end of his shift.

“This shows that we should be working longer hours,” Mathaiou said.

He said that due to a shortage of staff, each beach in the Paphos district has only one lifeguard on duty covering the hours of 10.30am to 6pm, with the exception of two stationed at both Sodap and Ta Bania in Kato Paphos.

He added that another incident at Potima Bay in Kissonerga on Monday saw a lifeguard have to rush into the sea to save a tourist from drowning. The tourist had entered the sea despite a red flag on display.

The lifeguard head said that this beach is a large area to cover and too much for one person, and that the lifeguard put his own life in danger to save the swimmer as the waves were huge. He noted that it also meant that no-one was scanning the beach while he was performing the rescue.

“This is very dangerous for us and the public. Also, we are not having a break to eat as we have no time, and we have to watch a huge expanse of coastline with a high level of concentration. It’s also difficult to take a toilet break as on most beaches the toilet is some considerable distance from the lifeguard tower.”

He pointed out that the lifeguards were also putting their own health in danger as currently the weather is hot and humid and many are making it through the day only on liquids as there is no time to grab even a small bite to eat.

“We need more equipment, more staff and we should be working longer hours, especially at the popular beaches to ensure the safety of the public,” he said. Mathaiou suggested that lifeguards should be working on beaches from 6am to 8pm.

“We were promised more staff, and we only got seven. We have 46 lifeguards covering 120 kilometres of coastline in the district of Paphos and we need to have 96,” he said.

In June Paphos lifeguards held a peaceful protest over conditions outside Paphos district office over staff shortages, a lack of equipment and long overdue upgrades to lifeguard towers.

Mary Lambrou, Paphos District Officer, said that a total of ten new lifeguards were employed in Paphos this year, a big improvement on last year’s staff numbers, which stood at 36.

Our View: Opportunities like Crans-Montana do not come along every day