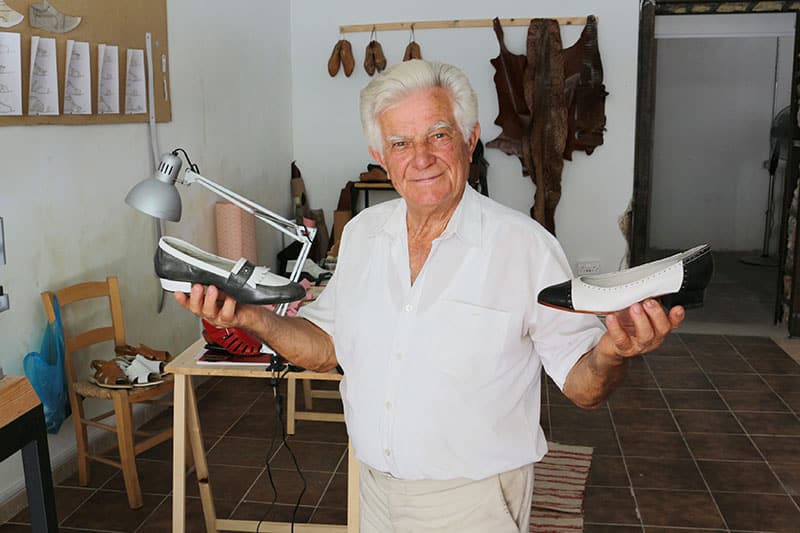 A lifetime of making shoes has seen one Paphos man shod the rich, famous and royal. NAN MACKENZIE meets him

“I can make any type of shoe be it a classic brogue, or a pair of co-respondent shoes, the Al Capone two tone design, or a classic slip on,” says 80-year-old master shoe maker Myrianthis Kelpis as he walks across his workshop in Paphos in a neat pair of brown and cream lace-ups he made himself. Although the shoes he currently turns out are designed to appeal to a wide audience, the cobbler’s art has seen him rub shoulders with the rich, famous and royal.

The Place in Paphos is a venue that promotes hand crafted goods created by talented locals and Kelpis’ bespoke (and off the peg) footwear is the latest addition. As a ‘footwearophile’ I have spent decades cooing/lusting over shoes, and like many other women have had to hide new shoe boxes from male friends as most would trot out the same silly line ‘Don’t you have enough shoes’?

At long last scientists have been able to explain why women have always been ‘wired’ for shoe lust – due to the presence of the neurotransmitter dopamine, which is released when looking in a shoe shop window, bringing on a feeling similar to taking a drug.

Then, if we move into the arena of glorious high heels, the belief is that when women slip on a pair of high heels they assume a basic primal mating pose called lordosis (yes it has an actual title), which refers to when the bottom lifts and the back arches. The final bit of the analysis centres on the fact that our minds are seemingly structured in a way that associates feet with sex, as the parts of the brain that communicate with the genitals and the feet are right next to each other.

Born the eldest of eight children in 1937, after his father died the now dapper Kelpis was apprenticed at the age of 12 for five years to Mesogi shoemaker Kleanthis Sofocles as he had to become the main bread winner for his family. It was not a craft that enjoyed a roaring trade as in those days men, women and children living in the villages wore sturdy boots with the local shoemaker making them new ones only once a year as they were an expensive purchase. Kelpis himself was earning five shillings a week while a good pair of hand made shoes would have cost around three pounds. The young apprentice was taught well, constructing shoes from leather sourced from the busy tannery in Nicosia with leather originating from cows, sheep and goats. A pair of lady’s shoes used two square feet of leather, while good boots would demand eight square feet and with leather at a premium a shoemaker had to be abstemious when it came to cutting it so that there was zero wastage, with any scraps being made into belts, purses, wallets and repair material.

With such pressure on raw materials it was a hard time to make any money from shoes so as soon as he was qualified, Kelpis knew it was time to look overseas. “I knew that once my apprenticeship was complete I would have to leave the island and travel to London where my sister was living. I did that with just 30 shillings in my pocket and high hopes. Once I recovered from the shock of landing in Britain’s capital on a freezing cold November night in 1954, I managed in a few weeks to get a job with a Turkish Cypriot who had a shop selling bespoke shoes. It was here that I learnt the high standards necessary to create the very best footwear, and the long hours involved,” Kelpis says.

This was followed by a stint in a shoe factory where Kelpis found himself in charge of making sandals. The factory was again hard slog and also poorly paid so it was not long before Kelpis realised his experience in hand making plus the knowledge gained from mass production meant he had the necessary technical experience to start out on his own. “I knew that wealthy people wanted hand crafted footwear so I sunk all my savings into opening a shop on the Fulham road. As the weeks passed I had almost given up hope when one afternoon a Rolls Royce pulled up outside, the chauffeur opened the car door and out stepped an elegantly dressed man in the company of a young man who was walking awkwardly as his legs were in callipers. This was a Lebanese businessman whose son had had polio meaning he had serious mobility problems. The father had tried and failed to acquire the correctly fitted shoes his son needed and of course I took on the commission. A few days later, having worked solidly night and day, I delivered the shoes and charged 300 pounds, but the father was so delighted at the finished result he added a further 1,000 pounds to the bill,” remembers Kelpis. That one great commission, followed by a regular order for 14 shoes a year, had him on the first rung of the ladder.

What Kelpis did not know at the time was that the Lebanese man was employed as a financial adviser to the Saudi Royal family and soon the shoe maker was summoned to meet Prince Falsal and Prince Kelif at the Dorchester Hotel. Perhaps not surprisingly this led to more commissions including one for 124 pairs of shoes for a Saudi princess over a two-year period. It was a royal connection that seemed set to grow as he was then asked to make a pair of handmade monogrammed slippers for Prince Michael of Kent and after being taken on by Harrods for special commission work made around 15 pairs of shoes for Princess Diana, although he never met her, measurements being sent in by the relevant royal servant.

“My speciality was creating shoes for people with problem feet because I was always taught that like a good house your body needs a good supporting foundation and if your footwear makes you stand crooked then the rest of your body will also soon be crooked. The real comfort test is to wear my shoes all day and when you get home at night forget to take them off! That’s when the fit is absolutely correct”.

Although the glamorous and high profile wore his shoes, Kelpis did not always get to meet them and they were probably unaware of who he was as the shoes themselves would either bear the Harrods label or that of Deliss, where he worked in the 60s, in Beauchamp Place. “But it was all my own work and during my co-operation with Deliss I made shoes, and crazy boots for Rod Stewart stage shows and monogrammed slippers he wanted made out of a Persian carpet – he always wanted to feel comfortable in shoes during his concerts. I also shod Roger Moore on a regular basis and Elizabeth Taylor,” who was one of the stars he did meet. “She had some problems with her feet and required extra fittings with me. I still remember the black patent sandals she commissioned – she was delighted with the result. She was a truly lovely, gracious woman and the extra bonus was always the presence of Richard Burton who was at her side during the fittings which always took place in their hotel suite whenever they returned to London”.

Kelpis’ bespoke shoe and bag designs were also snapped up by ladies going to society parties or weddings and even 40 years ago a pair of these special designs would cost around 850 pounds.
This master craftsman, mender of bad soles and surgeon to old shoes still makes footwear in almost the same way they made shoes 80 years ago and although he has since returned to Paphos, which he missed in the grey climate of London, he still works every day but now in the company of his son George, who was trained in the art in Italy. George’s final show while in Italy included samples of decidedly different but very appealing boots crafted from denim and leather. George and his father still deal with customers who need specially made and properly fitting shoes and boots in addition to those who respect the fact that a bespoke shoe will not only last for many many years but will stand out from the crowd.

In addition the walls of their shop on a warm summer day reflect that hand made leather sandals are still a popular option. Their store in The Place is lined with them and they are ready and willing to adapt them to customer taste, using everything from beads to woven materials, and at a price that is terrifically reasonable.
Journeying in to work every day remains a pleasure for Kelpis because he adores what he does and is proud that a craft he learnt at the age of 12 has not only provided self satisfaction but allowed him to bring up a family and pass a trade on to his son. “The North American Indians say that you should never judge a man until you have walked in his shoes,” he says. “Well if I had made their shoes then he or she would be judged very well indeed!”