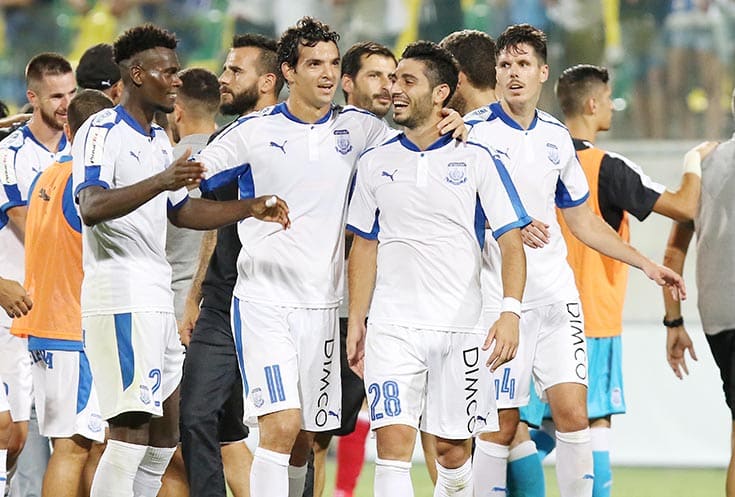 Apollon and AEK will be looking to follow in the footsteps of Cypriot champions Apoel in their Europa League playoff first leg matches tonight.

Apoel recorded a 2-0 win over Slavia Prague in their Champions League playoff first leg on Tuesday, and AEK and Apollon will be hoping for similar results as they seek to enter the group stages of the Europa League.

Apollon host FC Midtjylland from Denmark at the AEK Arena, and the Limassol side are currently in great spirits after a superb start to the season. After their first leg defeat at Aberdeen in the previous round, Apollon rallied back to earn an impressive 2-0 home win to send them into the playoff round.

That was followed up with a 2-1 win over Apoel in the Cypriot Super Cup last week, leaving Sofronis Avgousti’s men full of confidence ahead of the final round before the group stages.

Their Danish counterparts are not to be taken lightly, but they have not been quite as emphatic in the build-up to the tie. Midtjylland needed a stoppage time winner from Alexander Sorloth in their third round second leg against Polish side Arka Gdynia to see them into the playoff.

As far as Midtjylland’s league form is concerned, they have won three of their opening five Superliga matches. Their last encounter was a 4-3 thriller against Nordsjælland where they went 4-0 up before being suffering a late scare when the visitors scored three times.

Speaking to the Danish club’s official website, manager Jess Thorup said: “We must have confidence after our win over Nordsjælland. We must use it for the match in Cyprus. It will be difficult but we are ready to enter the groups”.

Thorup will be without young midfielder Mikkel Duelund but have been boosted by the news that André Rømer and Bozhidar Kraev are fit to make the journey to Larnaca.

Midtjylland played in Cyprus just two years ago, when they took on Apoel in the Champions League third qualifying round. Despite the Danes recording a 0-1 win in Nicosia, it was not enough as Apoel progressed on away goals.

AEK have a slightly tougher task ahead of them, as they have to travel to the Czech Republic to take on Viktoria Plzen. Like Apollon, the Larnaca club have impressed throughout their Europa League campaign this season.

Imanol Idiakez’s side are undefeated in their six qualifiers so far, conceding just twice in the process. Their two draws have come away from home, against Lincoln Red Imps and their most recent game in Belarus against Dinamo Minsk which secured progression to the playoffs while, in the second round, they defeated Cork City 0-1 away.

Plzen dropped into the Europa League playoff round as a result of them crashing out of the Champions League qualifiers in the third round. The Czech side drew 2-2 at home in the first leg against FC Steaua Bucuresti of Romania, before suffering a heavy 1-4 loss at their stadium.

Pavel Vrba’s side have made the perfect start to the new league season however, with three wins from as many games which sees them top of the table ahead of Slavia Prague.

Apollon kick off against FC Midtjylland at the AEK Arena at 8.00pm Cyprus time, while Viktoria Plzen get things going against AEK at 9.15pm at the Doosan Arena.