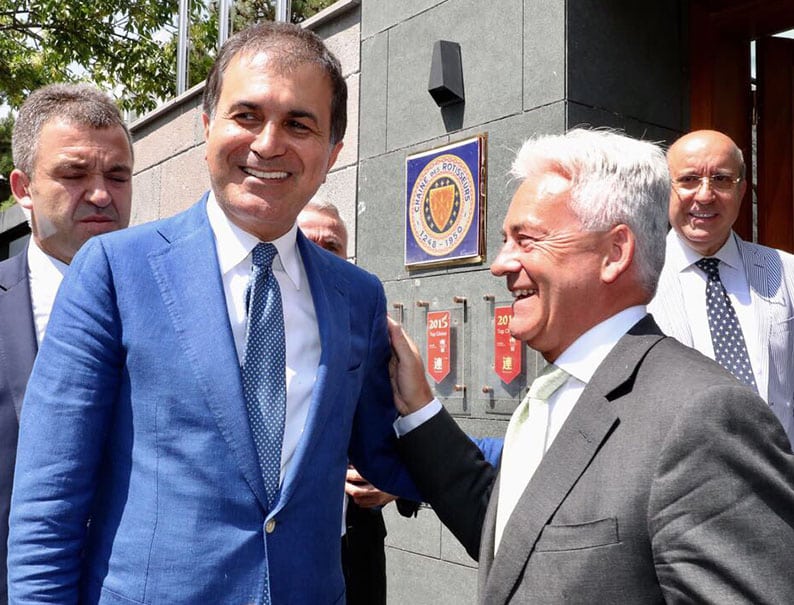 Turkey’s EU Minister, Omer Celik said on Thursday that the Cyprus settlement talks were “not suspended, nor frozen”, but “over”.

In his statements following his meeting with UK’s Minister of State for Europe, Sir Alan Duncan in Turkey, Celik, according to Anadolu news agency, said that the talks were over.

He added that despite the Turkish side’s positive approach, at the Conference on Cyprus that ended inconclusively last month in Switzerland, a solution was not achieved.

In his turn, Duncan, who had attended the talks in Crans-Montana, which reached deadlock on July 6,  said he was saddened that the Conference on Cyprus ended in failure, and that the UK is aware “of the constructive and positive approach” of Cavusoglu.

Duncan is in Turkey on an official visit where he discussed with Celik bilateral relations, EU, Brexit, Cyprus and extremism.

Also on Thursday Turkey’s Foreign Minister Mevlut Cavusoglu said Greek Cypriot positions on security and guarantees post Crans-Montana were an excuse, and that they did not really want a solution within the UN parameters.

According to Bayrak TV station in the north, Cavusoglu said that the Greek Cypriots did not want to share governance and power and that the issue of security and guarantees was just an excuse.

In an assessment of the Cyprus issue he made on Turkish state broadcaster TRT, Cavusoglu said that Turkey and the regime in the north had done their part and that they presented concrete proposals and everyone had seen that they were highly logical and constructive.

Turkey, he said, backed the north at the negotiations process. Negotiations, he said, were held on the island within the UN framework. Of the six chapters, convergences were achieved on four of them, but that outstanding issues remained. “We wanted to discuss and conclude the last two chapters, especially territory and also security and guarantees together,” Cavusoglu said.

He added that Greek Cypriots and Greece however, could not come closer to a solution with the current parameters, “because they (Greek Cypriots) think that they have an EU member state. Therefore, they do not want to share governance and power. Security and guarantees is just an excuse.”

Cavusoglu also said that the Republic’s “unilateral drilling activities in Cyprus” were wrong. “Turkish Cypriot people also have rights there.”

He also reiterated Turkey’s desire for reaching a settlement in Cyprus.

A UN spokesman said on Wednesday that following the collapse of the latest round of reunification talks, the parties in Cyprus are in a period of reflection, while the UN Secretary-General would make a decision on the way forward in due course.

President Nicos Anastasiades said earlier in the week that he will probe the possibility over a new initiative for a Cyprus settlement during the UN General Assembly, next month in New York. In a recent interview Anastasiades said the two sides were close to reaching a settlement deal in Switzerland but this was prevented by Turkey’s insistence on the permanent presence of 1,800 Turkish soldiers on the island.

After the departure of former UN Special adviser on Cyprus Espen Barth Eide, who officially requested to be released from his responsibilities in order to run in the upcoming legislative elections in his country, Norway, the UN said, the office of the special adviser will be headed by the deputy special adviser, Elizabeth Spehar, who also serves as the head of Unficyp.