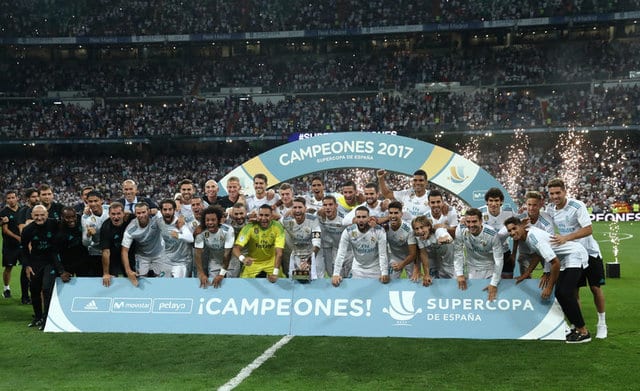 Real Madrid won the Spanish Super Cup for the 10th time with a 2-0 win over rivals Barcelona at a joyous Santiago Bernabeu on Wednesday to complete a 5-1 aggregate victory that underlined their new status as Spain’s dominant force.

Marco Asensio followed up his brilliant late goal in Sunday’s first leg with a stunning effort from 30 metres in the fourth minute that proved a punishing blow for the Catalans.

Karim Benzema struck before halftime to seal the victory and Barcelona left the Spanish capital with home supporters’ chants of ‘champions’ ringing in their ears.

Real, last season’s Spanish and European champions, dominated throughout, toying with Ernesto Valverde’s side and showing no sign they were missing suspended forward Cristiano Ronaldo or Gareth Bale who was on the bench.

Lionel Messi and Luis Suarez both hit the woodwork but it was a bleak display for Barcelona, leaving Valverde with plenty of holes to patch before the start of the league this weekend.

Real, meanwhile, have started where they left off last season, by adding more silverware to their bursting trophy cabinet.

They clinched the European Super Cup last week with a 2-1 victory over Manchester United in Macedonia, adding to an already remarkable haul for coach Zinedine Zidane since he took over in Jan. 2016.

With Ronaldo banned for shoving the referee in the first leg, Asensio was given a starting spot and made an instant impact.

The 21-year-old curled a brilliant strike into the top left corner from distance that left keeper Marc-Andre ter Stegen bewildered.

“The first was beautiful, but this one was, too. The other was harder because of the path (it took),” Asensio told reporters.

“I’m going to work to have the maximum minutes possible out there. I’m very happy on a personal level and for the collective, too.”

The second goal had been coming, with Lucas Vazquez striking the post minutes earlier, and it eventually arrived when Marcelo sent in a low cross which Benzema finished with aplomb in the 38th minute.

After that Madrid controlled the game, stroking the ball around their opponents and conserving energy for the challenges ahead.

“We have started the season well, there’s a long way to go,” said Zidane. “It will be very difficult but we are happy. The first half was spectacular.”

No plans to change beach status of Aphrodite’s Rock

Apollon and AEK looking to gain advantage in Europa

VAR in Cyprus to begin on December 11

No slowing down for record-breaking Hamilton