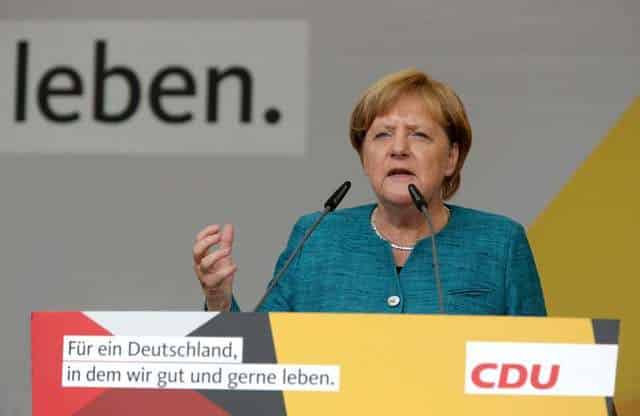 German Chancellor Angela Merkel was greeted with shouts of “traitor” by a rowdy group of right-wing protesters in east Germany on Thursday as she defended her decision to allow hundreds of thousands of refugees into the country.

Roughly five weeks before an election in which she is expected to win a record-tying fourth term, Merkel veered from her stump speech, acknowledging “difficult times” in 2015 when a flood of asylum seekers, many from the Middle East, entered Germany.

It was her first campaign stop in eastern Germany, parts of which have been fertile ground for anti-immigration politics.

“Many people were worried. They said to themselves: ‘What about us? Are we still important or are only the refugees important’?” she told a crowd of several thousand in the central market square in Annaberg-Buchholz, a town in the state of Saxony near the Czech border.

Saxony was the focal point of anti-Islam protests that erupted in Germany during the refugee crisis. The anti-immigration Alternative for Germany (AfD) is particularly strong in the state and dozens of its supporters turned up to shout down Merkel.

They chanted “traitor” and “get out of here” as she took the stage, holding up signs that read “Regime Change in Germany!” and “CDU – we are destroying Germany”, a reference to her conservative Christian Democratic Union (CDU) party.

Many blew loud whistles, making it hard for the hundreds of Merkel supporters in the audience to hear her and forcing the chancellor to acknowledge their presence.

“Some want to listen, but others can only shout. That is what separates us,” said Merkel, who grew up in eastern Germany. “Some want to get things done and others just scream.”

Nearly 900,000 refugees entered Germany in 2015 and roughly a third of that number last year. But with the numbers continuing to decline, the issue, which threatened to topple Merkel 1-1/2 years ago, has not played a big role in the election campaign so far.

That is partly due to the continued strength of the German economy and because many of the other parties in Germany, including the centre-left Social Democrats (SPD) and environmentalist Greens, supported Merkel’s open-door policy.

The four-year-old AfD, which started as an anti-euro party, is an exception. It has scored above 20 percent in state elections in eastern Germany, its stronghold. But nationally, its support has fallen to the high single digits amid infighting and a steady drop in refugee numbers.

“I’ve voted for Merkel in the past, but I can’t anymore,” said Reiner Krueger, a 64-year-old retired baker who came to see her speak. “She made a huge mistake with the refugees. They are hoping people forget but I can’t.”