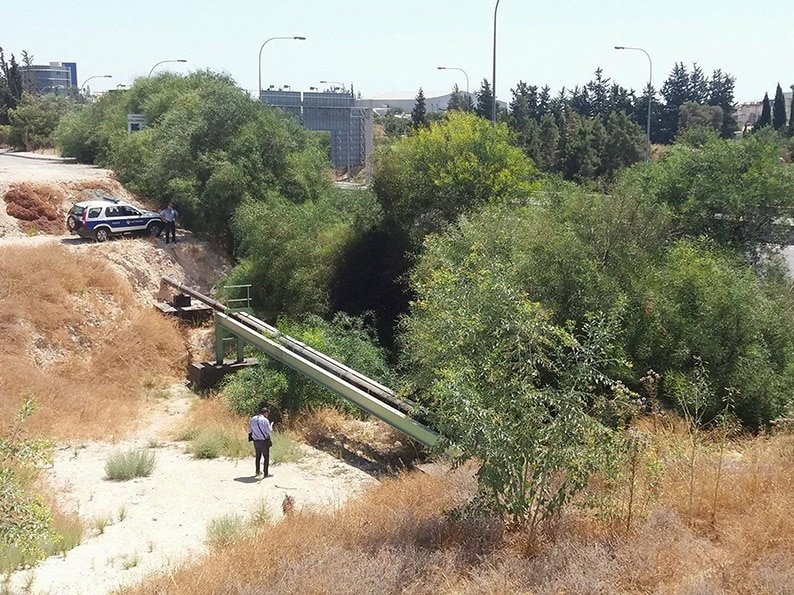 Police searching the area where the getaway motorbike was found

Police said on Thursday they were confident they will be able to find out who was behind the armed robbery at the Limassol co-op bank in which more than €40,000 was stolen.

Investigators have established that the high-powered motorcycle which was used in Wednesday’s robbery was stolen on July 27.

Identification of the thieves is hampered by the fact that they were wearing helmets and dark clothes.

“We are studying the images captured by the bank’s closed monitoring circuit very carefully, checking the evidence found at the scene, investigating suspects and generally investigating every element that may lead us to the perpetrators,” deputy Limassol CID chief Marinos Demetriou said on Thursday.

The robbery at the branch at Ayios Athanasios took place at around 10am on Wednesday.

Two men clad in black and wearing motorcycle helmets threatened the five customers and three employees with a sawn-off hunting shotgun and a pistol.

They instructed the customers to lie on the floor and the tellers to hand over the money in their tills.

After snatching €40,000 and a number of cheques the men fled on a large motorbike which was found alight near the scene shortly afterwards.

This is the third robbery of a co-op in August and police believe the three are connected. On August 7, armed robbers stole €30,000 from a co-op in Timi, following another one in Pyrgos on August 2 where two thieves managed to grab nearly €15,000.

Demetriou said a thorough investigation is being carried out to see whether Wednesday’s robbery is related to the previous two robberies and to others committed in the past.

“Their mode of action is identical,” he said. “We are considering how far the cases are related, if the perpetrators are the same in all the robberies or are members of a gang who are acting throughout Cyprus. We believe they are Cypriots, but without excluding the possibility that they may also be foreigners, all this needs investigating.”

In the August 2 incident two individuals fled on a motorcycle with €14,980 after using a sawn-off hunting gun to break through the entrance.

Five days later two armed persons fled a co-op in Timi with a wad of cash using a vehicle which had been reported stolen from a parking lot at Paphos airport. They were also armed, with an assault rifle and a hunting shotgun.