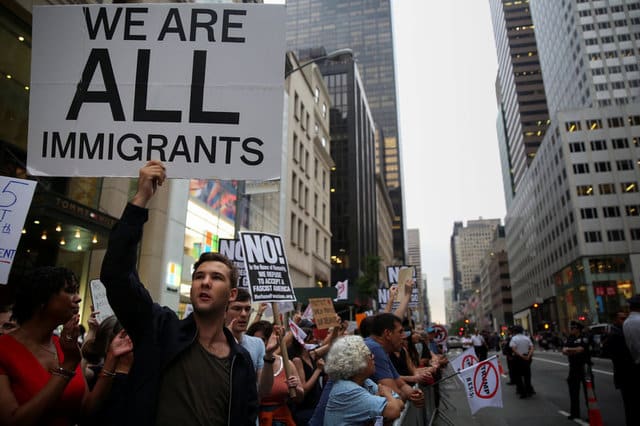 A parade of prominent Republicans also rebuked Trump, as well as U.S. ally Britain, leaving him increasingly isolated after his comments on Tuesday about the bloodshed in the college town of Charlottesville further enveloped his seven-month-old presidency in controversy.

The mayor of Phoenix asked Trump to delay a rally planned for next Tuesday, an appeal the president appeared to reject.

A memorial service was held on Wednesday in Charlottesville for 32-year-old Heather Heyer, who was killed when a car plowed into anti-racism protesters on Saturday. A 20-year-old Ohio man said to have harbored Nazi sympathies has been charged with her murder.

Trump, a real estate magnate who had never before held public office, was elected president in November touting his experience in the business world and ability to strike deals. However, some of the Republican president’s actions and words have alienated many corporate leaders.

He said he would dissolve the American Manufacturing Council and the Strategic and Policy Forum after eight executives, including Campbell Soup Co CEO Denise Morrison and 3M Co CEO Inge Thulin, quit the panels.

Both councils were moving to disband on their own when Trump made his announcement on Twitter.

“Rather than putting pressure on the businesspeople of the Manufacturing Council & Strategy & Policy Forum, I am ending both,” he wrote.

The Strategic and Policy Forum was headed by Blackstone Group CEO Stephen Schwarzman, a close ally of Trump in the business world. Schwarzman organized a call on Wednesday for member executives to voice concerns after Trump’s comments, and an overwhelming majority backed disbanding the council, two sources said.

Schwarzman then called Trump to tell him about the decision to disband.

Campbell Soup Co’s Morrison said: “Racism and murder are unequivocally reprehensible and not morally equivalent to anything else that happened in Charlottesville.”

JPMorgan Chase & Co CEO Jamie Dimon, a member of one of the panels, said in a statement that “fanning divisiveness is not the answer.”

Dow Chemical Co Chief Executive Andrew Liveris, who headed the manufacturing council, said he told the White House on Wednesday that “in the current environment it was no longer possible to conduct productive discussions.”

The Strategic and Policy Forum was intended to advise Trump on how government policy impacts economic growth, job creation and productivity. The manufacturing council was designed to promote U.S. job growth.

Trump needs the support of fellow Republicans as he tries to push his policy agenda, including tax cuts, through a Congress that is controlled by the Republicans.

Phoenix Mayor Greg Stanton, a Democrat, said Trump would “enflame emotions and further divide our nation” if he used next week’s rally to pardon Joe Arpaio, a former Arizona sheriff who was found guilty last month of criminal contempt of court.

Arpaio gained a national profile due to his harsh treatment of inmates and outspoken opposition to illegal immigration.

Few public figures have voiced support for Trump over his response to the violence.

Vice President Mike Pence, who is cutting short a trip to Latin America, told reporters in Chile that “I stand with the president and I stand by those words.”

U.S. stocks ended slightly firmer but off the day’s highs as investors worried that the backlash to Trump’s remarks could stunt his ability to deliver on pro-business promises.

A former senior Trump administration official raised the prospect that some White House officials could quit because of Trump’s comments.

The demise of the councils raised Wall Street speculation that senior administration figures, such as White House economic adviser Gary Cohn or U.S. Treasury Secretary Steven Mnuchin, might step down to avoid being tarnished by association with Trump.

Cohn, Mnuchin and Transportation Secretary Elaine Chao stood awkwardly by Trump during his remarks at Trump Tower on Tuesday.

“He’s worried about his reputation being trashed, which is much more valuable to him than anything else,” the former administration official, speaking on condition of anonymity, said of Cohn.

McConnell, who drew Trump’s ire last week over the Senate’s failure to pass healthcare legislation, issued a statement saying “messages of hate and bigotry” from white supremacists should not be welcome in the United States. McConnell’s statement did not mention Trump by name.

U.S. Secretary of State Rex Tillerson said there is “simply no place” in American public discourse for the “hate and violence” displayed in Charlottesville. He spoke before a meeting with Canada’s foreign minister.

‘BLAME ON BOTH SIDES’

Trump’s remarks on Tuesday were a more vehement reprisal of his initial response to the bloodshed. He said at a heated news conference in New York “there is blame on both sides” for the violence, and that there were “very fine people” on both sides.

In London, British Prime Minister Theresa May offered a rare rebuke of a U.S. president from so close an ally.

“I see no equivalence between those who propound fascist views and those who oppose them and I think it is important for all those in positions of responsibility to condemn far-right views wherever we hear them,” May told reporters. 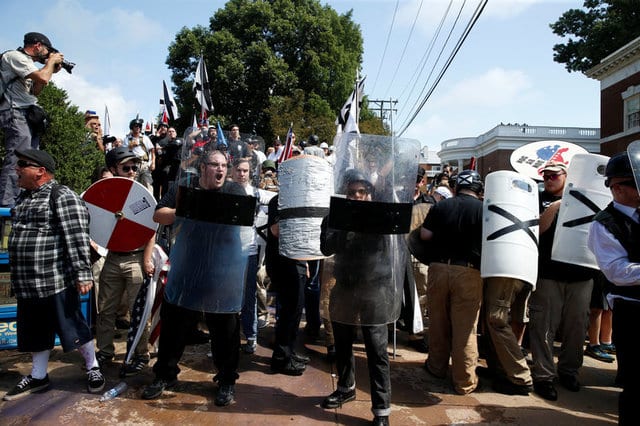 Politicians in Germany, which has tough laws against hate speech and any symbols linked to the Nazis, who murdered six million Jews in the Holocaust during World War Two, expressed shock at the images of people in Charlottesville carrying swastikas and chanting anti-Jewish slurs.

Joseph Dunford, the Chairman of the U.S. Joint Chiefs of Staff, told reporters in Beijing: “I can absolutely and unambiguously say that there is no place, no place, for racism and bigotry in the U.S. military or in the United States as a whole.”

U.S. Army Chief of Staff General Mark Milley wrote on Twitter: “The Army doesn’t tolerate racism, extremism, or hatred in our ranks. It’s against our Values and everything we’ve stood for since 1775.”

Air Force Chief of Staff General Dave Goldfein‏ said on Twitter that “I stand with my fellow service chiefs in saying we’re always stronger together.”

Their comments followed similar ones from the top officers of the Navy and Marine Corps.

Police confident they will hunt down co-op robbers