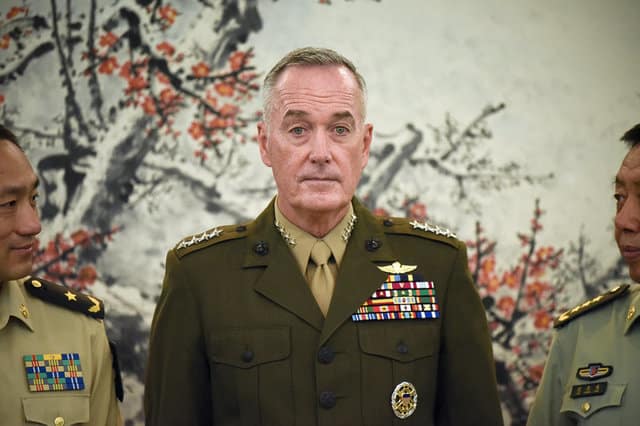 Chairman of the US Joint Chiefs of Staff, General Joseph Dunford poses a group photo with Chinese vice chairman of the Central Military Commission Fan Changlong (right) in Beijing

The United States and South Korea will go ahead with joint military drills next week, the top US military official said on Thursday, resisting pressure from North Korea and its ally China to halt the contentious exercises.

North Korea‘s rapid progress in developing nuclear weapons and missiles capable of reaching the US mainland has fuelled a rise in tensions in recent months.

US President Donald Trump warned North Korea last week it would face “fire and fury” if it threatened the United States, prompting North Korea to say it was considering plans to fire missiles at the US Pacific territory of Guam.

Annual military drills involving tens of thousands of US and South Korean troops are due to begin on Monday.

North Korea views such exercises as preparations to invade it.

China, North Korea‘s main ally and trading partner, has urged the United States and South Korea to scrap the drills in exchange for North Korea calling a halt to its weapons programmes.

Joseph Dunford, chairman of the US Joint Chiefs of Staff, said the exercises were “not currently on the table as part of the negotiation at any level”.

“My advice to our leadership is that we not dial back our exercises. The exercises are very important to maintaining the ability of the alliance to defend itself,” Dunford told reporters in Beijing after meeting his Chinese counterparts.

“As long as the threat in North Korea exists, we need to maintain a high state of readiness to respond to that threat,” he said.

Fan Changlong, a vice chairman of China’s powerful Central Military Commission, told Dunford that China believed the only effective way to resolve the issue was through talks.

“China believes that dialogue and consultations are the only effective avenue to resolve the peninsula issue, and that military means cannot become an option,” China’s Defence Ministry cited Fan as saying.

Asked to respond to the criticism that China’s “dual suspension” proposal to halt the US military drills with South Korea and the North‘s missile tests made a false equivalence between the two, Foreign Ministry Spokeswoman Hua Chunying said it was the most realistic and achievable solution.

“To ease the tense situation created by tit-for-tat escalations, to halt this vicious cycle, there is a need to put aside the dispute over who goes first and who goes second,” she said, speaking at a regular briefing.

North Korea has in the past fired missiles and taken other steps in response to such exercises.

Arriving in Tokyo on Thursday, the new US ambassador to Japan, William Hagerty, said America’s ability to defend itself and its allies against North Korea was “beyond question”.

He reaffirmed Washington’s commitment to its alliance with Tokyo, a security pact he described as “ironclad.”

Allies the United States and South Korea remain technically at war with North Korea after the 1950-53 Korean conflict ended with a truce, not a peace treaty.

US and South Korean officials have for months been expecting a sixth nuclear test.

“I would consider that North Korea is crossing a red line if it launches an intercontinental ballistic missile again and weaponises it by putting a nuclear warhead on top,” South Korean President Moon Jae-in said at a news conference in Seoul marking his first 100 days in office.

Moon has repeatedly urged North Korea not to “cross the red line” but had not previously elaborated what that would constitute.

Trump had promised to seek negotiations and approval from South Korea before taking any options regarding North Korea, Moon also said.

The United States has said it prefers global diplomatic action to stop North Korea‘s ballistic missile and nuclear programmes but it is ready to use force if needed.

“Until somebody solves the part of the equation that shows me that 10 million people in Seoul don’t die in the first 30 minutes from conventional weapons, I don’t know what you’re talking about, there’s no military solution here, they got us,” Bannon told The American Prospect.

Bannon said he was pushing the US administration to take a harder line on China trade and not put complaints against its trade practices in the back seat in the hope it would help restrain the North‘s leader, Kim Jong Un.

“To me, the economic war with China is everything. And we have to be maniacally focused on that,” The American Prospect quoted Bannon as saying.

North Korean media reported on Tuesday that Kim had delayed the decision on firing four missiles towards Guam, a US territory home to an air base and Navy facility, while he waited to see what the United States did next.

“Kim Jong Un of North Korea made a very wise and well reasoned decision,” Trump wrote on Twitter on Wednesday. “The alternative would have been both catastrophic and unacceptable!”