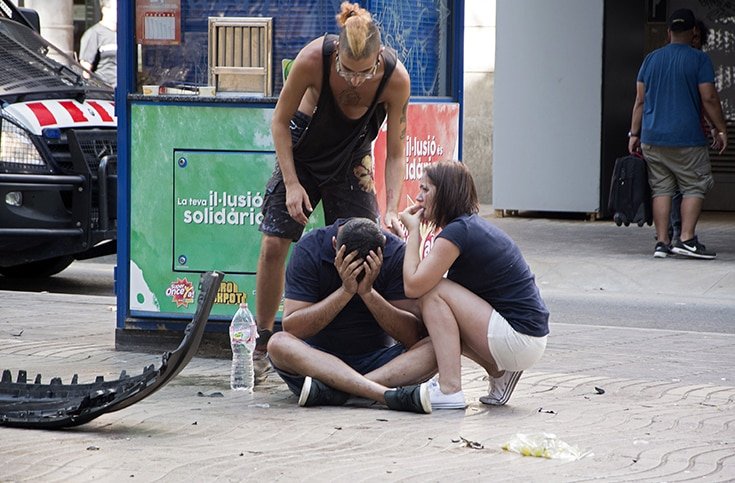 A van mowed through crowds of tourists on Barcelona’s most famous avenue on Thursday, killing about a dozen people in an attack that was claimed by Islamic State.

The head of the Spanish region of Catalonia, Carles Puigdemont, said at least 80 people had been taken to hospital and around 12 had died.

He said two people had been arrested. It was still not clear how many attackers had been involved.

Witnesses said the white van zigzagged at high speed down Las Ramblas, a busy avenue thronged with tourists, knocking down pedestrians and leaving bodies strewn across the ground.

Islamic State’s Amaq news agency said: “The perpetrators of the Barcelona attack are soldiers of the Islamic State and carried out the operation in response to calls for targeting coalition states” – a reference to a US-led coalition against the Sunni militant group.

If the involvement of Islamist militants is confirmed, it would be the latest in a string of attacks in the past 13 months in which they have used vehicles to bring carnage to the streets of European cities.

That modus operandi – crude, deadly and very hard to prevent – has killed well over 100 people in Nice, Berlin, London and Stockholm.

Witness Tom Gueller told the BBC: “I heard screams and a bit of a crash and then I just saw the crowd parting and this van going full pelt down the middle of the Ramblas and I immediately knew that it was a terrorist attack or something like that.

“It wasn’t slowing down at all. It was just going straight through the middle of the crowds,” he added.

It was the deadliest attack in Spain since March 2004, when Islamist militants placed bombs on commuter trains in Madrid, killing 191 people and wounding more than 1,800.

Spanish Prime Minister Mariano Rajoy said on Twitter he was en route to Barcelona. “Maximum coordination to arrest the attackers, reinforce security and attend to all those affected,” he said.

The Spanish royal household said on Twitter: “They are murderers, nothing more than criminals who are not going to terrorise us. All of Spain is Barcelona. Las Ramblas will go back to being everyone’s.”

US President Donald Trump said: “The United States condemns the terror attack in Barcelona, Spain, and will do whatever is necessary to help.”

La Vanguardia newspaper said one of the suspected perpetrators had been killed in a shootout with police on the outskirts of Barcelona, but this was unconfirmed.

Catalan police said a driver ran over two police officers at a checkpoint in Barcelona after the van attack, but it was not clear if the incidents were linked.

Mobile phone footage showed several bodies strewn along the Ramblas, some motionless. Paramedics and bystanders bent over them, treating them and trying to comfort those still conscious.

Around them, the boulevard was deserted, covered in rubbish and abandoned objects including hats, flip-flops, bags and a pram.

Belgium’s foreign minister said a Belgian was among the dead.

Regional head Puigdemont said people had been flocking to hospitals in Barcelona to give blood.

A witness named Rebecca told La Vanguardia: “I’ve seen a lot of people knocked down on the floor and the people are running and crying. The van drove down the middle of the street dragging everyone with it.”

French President Emmanuel Macron, whose nation has suffered some of Europe’s deadliest militant attacks in recent years, tweeted: “All my thoughts and France’s solidarity to the victims of the tragic attack in Barcelona.”

Authorities in Vic, a small town outside Barcelona, said a van had been found there in connection with the attack. Spanish media had earlier reported that a second van had been hired as a getaway vehicle.

Barcelona is the capital of the wealthy northeastern region of Catalonia, which plans to hold a popular vote on Oct 1 on whether it should secede from Spain. It is in dispute with the central government, which says the vote cannot go ahead because it is unconstitutional.

Following the attack, security staff at Barcelona airport suspended a strike that started in early August. “Our work is now more necessary than ever,” a spokesman said.

Three drown, many feared missing in migrant shipwreck off Greece