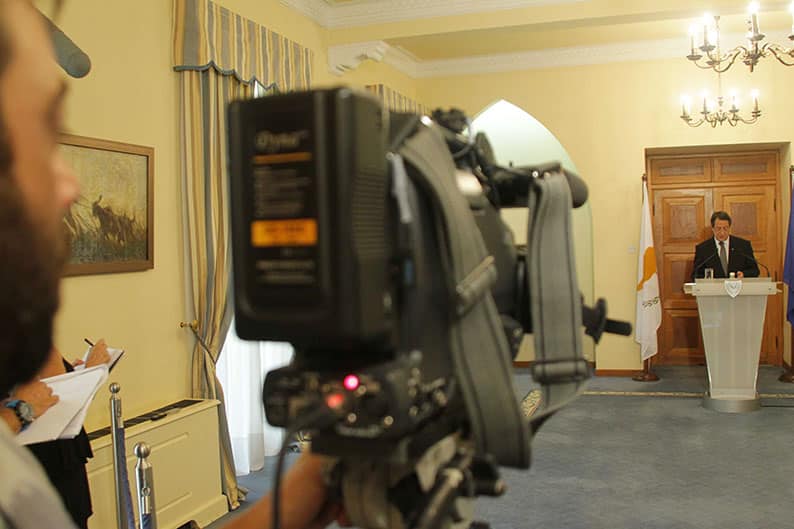 THE Radio Television Authority (CRTA) slapped TV and radio stations this week with fines exceeding €57,000 in total, for airing among others, improper comments against President Nicos Anastasiades and Archbishop Chrysostomos.

In total, the CRTA issued rulings in 20 cases concerning 125 violations for breach of human rights – respect to one’s personality, honour, privacy – use of indecent language, wrong content rating, failing to provide sign language in news programmes, advertising during no-advertisement zones, advertisements with misleading information, airing material showing excessive violence, and breach of licence terms. The authority imposed €57,350 worth of fines in total, in 16 of these cases, and warning to the remaining.

The Limassol-based Extra TV was slapped with a €6,000 fine for airing last November in its main news programme a live phone interview with Ilias Kasidiaris, the vice-president and MP of the far-right Golden Dawn party in Greece, who accused Anastasiades of being “servile towards the Turks” and for following a policy that is “treacherous to the nation”.

The interview, given to the station’s editor-in-chief, was aired on November 17, during Anastasiades’ visit in Athens, where he had briefed all Greek political leaders – except those of Golden Dawn – on the latest developments concerning the settlement talks.

Kasidiaris, said that Anastasiades did not invite Golden Dawn to the briefing because he did not dare “listen to the opposite point of view, the ethnocentric view”. He added that the briefing was nothing more than “shadow theatre” and that Anastasiades’ goal was to revive the 2004 UN (Annan) plan for the reunification of the island which was rejected by the majority of the Greek Cypriots.

“Back then (2004), luckily, national leader Tassos Papadopoulos was in power, today, unfortunately, the political life of Cyprus has stooped to be represented by Anastasiades, who wants to bring the Annan plan back,” Kasidiaris said.

The CRTA ruled that the TV station in question broadcast “an interview in its news bulletin which was not governed by respect for the personality and reputation of the President of the Republic of Cyprus, Nicos Anastasiades, for which reference was made”.

TV stations, it said, are obliged to safeguard respect to the personality, honour, reputation, private life and professional activities of persons they host or who are being mentioned in their programmes including advertisements.

The authority also slapped Capital TV with a €3,000 fine for breach of the same principles, but this time for broadcasting a Greek gossip TV show where participants “distorted the points of view of Archbishop Chrysostomos”.

The show, according to the CRTA, made visual and verbal references to the archbishop “without ensuring respect to his personality, honour, reputation and private life”, while it also distorted things he had said concerning the Cyprus Church’s plans of opening its own schools and on homosexuality.

The archbishop’s comments last November during a TV show that he would tell schoolchildren that homosexuality was a sin and unnatural and that one ought to struggle to overcome it, had caused the ire of many, including Accept-LGBTI Cyprus that lodged an official report on Chrysostomos with the attorney-general for promoting hatred based on sexual orientation or gender identity.

Among others, participants of the Greek TV station Epsilon’s programme ‘Apokaliptika’ that was aired by Capital TV last November, said that the archbishop aimed at “founding schools to cure homosexuals” and at “creating the perfect human”.

Making references to the interview he had given, the show presented the archbishop as “trying to revive medieval perceptions and Goebbelsian tactics for perfecting human kind and developed his god inspired plan for his schools”.

The CRTA also imposed fines totalling €8,250 to Alpha, Sigma and Plus TV stations for airing in the main news bulletins the raw footage of the assassination of the Russian ambassador to Turkey in December last year, during his address at the opening of an art exhibition in Istanbul.

The TV stations in question were found to violate a number of regulations concerning airing – without a warning – a video with violent scenes within the family zone, which could harm “the physical, spiritual or moral development of minors”.

All Cypriot tourists in Barcelona on organized trips, accounted for and in good health

News podcast: why is the sea off Limassol so dirty?