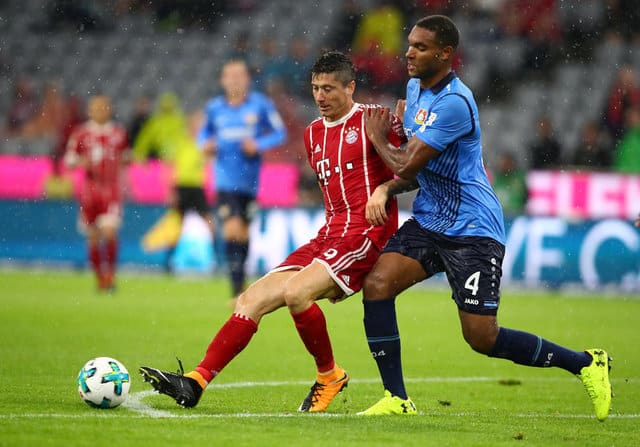 Champions Bayern Munich comfortably beat Bayer Leverkusen 3-1 in the Bundesliga season opener on Friday to lay down a marker as they eye a record-extending sixth straight German league title.

Newcomers Niklas Suele and Corentin Tolisso put the Bavarians ahead before Robert Lewandowski added a third goal with a penalty, following the official use of the video assistant referee for the first time in the Bundesliga.

Bayern were missing close to half a dozen key players through injury including keeper Manuel Neuer, Thiago Alcantara and Jerome Boateng, but it never showed as they rode roughshod over Leverkusen for more than an hour at the Allianz Arena.

Admir Mehmedi pulled a goal back in the 65th minute for the visitors, who missed a handful of late chances to score again.

“We have to improve our defensive work,” Bayern coach Carlo Ancelotti told reporters. “But I am not alarmed. We will get better.

“At this stage this can happen. If we want to have a clean sheet, we have to be more compact. We gave them at times too much space.”

Bayern could have taken the lead after five minutes when Frenchman Tolisso, the club’s record signing at 41 million euros ($48.22 million), came close to scoring on his league debut but goalkeeper Bernd Leno did well to block his low drive.

It took the hosts another five minutes to break the deadlock when Suele headed home after fellow newcomer Sebastian Rudy floated a free kick to the far post.

Midfielder Tolisso did score in the 19th minute with a close-range header from Arturo Vidal’s clever cross.

Tolisso then rattled the post four minutes later with Leverkusen struggling to repel the Bayern pressure.

The start of the second half was delayed for more than 20 minutes due to torrential rain, but seven minutes later the Bundesliga’s first ever use of the video assistant referee handed Bayern a penalty.

Poland forward Lewandowski, who had been brought down by Charles Aranguiz, converted the spot kick to grab Bayern’s third goal before Mehmedi fired in from close range.

Leverkusen finally managed to spark into life but were wasteful with their chances as Bayern stepped off the gas.