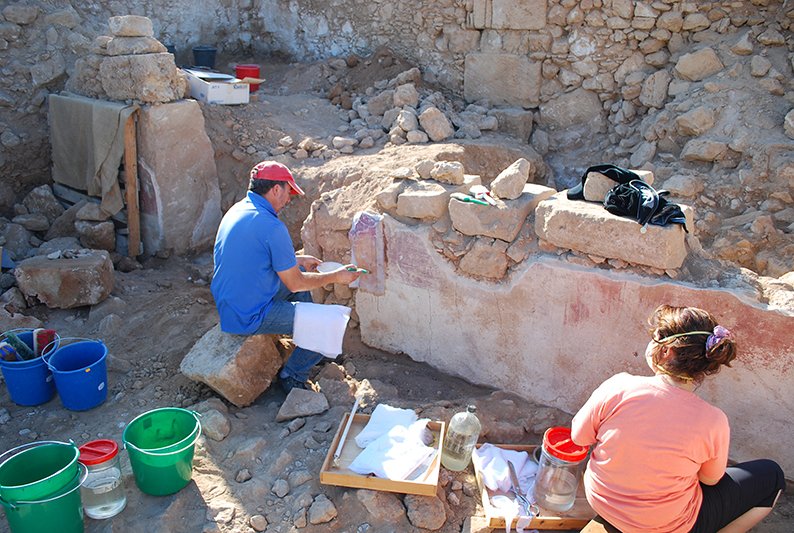 The Italian government has decided to donates to four research projects in Cyprus within the framework of its longstanding support to archaeological missions on the island.
An announcement on Friday from the Italian embassy of Italy said its government was continuing its longstanding tradition of supporting archaeological missions in Cyprus, “a country with a rich and unique historical heritage which has many common roots with Italy“.

One of the projects that will receive support is the excavations at Erimi-Laonin tou Paraokou, Limassol, directed by Professor Luca Bombardieri of the University of Turin.
The ancient site is been investigated since 2009 by an Italian research team which carries out the fieldwork with the scientific collaboration of the department of antiquities in Cyprus, and the Limassol Archaeological District Museum.

The project aims at achieving a greater understanding of the ideological and cultural aspects of the pre-urban society in prehistoric Cyprus, focusing on the emergence of major productive centres during the Middle Bronze Age, the birth of an urban society and the progressive integration of the island into the Mediterranean trading network during the second millennium BC. The research team is comprised archaeologists with a joint support of anthropologists, archaeobotanists, conservators and restorers.

The second project is the MPM Project: Survey, Excavation, GIS, archaeometric analysis and landscape archaeology in the Moni River Valley, directed by Prof. Oliva Menozzi of the University of Chieti.
This project, a study of the landscape in the area of Moni, Pyrgos, and Monagroulli in Limassol, which began in 2011 with a large team, including scholars and PhD/MPhil students from different institutions.

The research employs a suite of traditional methodologies for the study of landscape archaeology, GIS mapping, studies on typologies, distribution and statistics of pottery finds, in combination with high-end technologies such as remote sensing, satellite photos, analyses of finds and building materials, and non-invasive geophysical prospection.

The third project is the Ptolemaica Project, a study of the ties between Cyrene, Cyprus and Alexandria of Egypt in the Ptolemaic era, directed by Prof. Serenella Ensoli of the University of Napoli II.
The project aims to conduct research activities in Libya, Cyprus and the Middle East to acquire historical-archaeological data on the strong interrelations between Cyrene, Alexandria and Cyprus that existed in the Hellenistic age and beyond.

It seeks to highlight the role and influence of Cyprus within the cultural koiné of Hellenistic age, with particular reference to the relations of the island with Cyrene, and more generally with the main sites of the Eastern Mediterranean.

A strong focus of the project is on the Sanctuary of Apollo Hylates at Kourion. The buildings in the sanctuary have close affinity with those of the Sanctuary of Apollo at Cyrene and other sacred areas of the Eastern Mediterranean dating from the Greek and Roman era. Prof. Ensoli also seeks to create a digital database of relevant sculptures kept in the Museums of Nicosia and Kourion and to study the the “Fabrika Hill” site in Nea Paphos in relation to Apollo Hylates and Apollo sanctuary in Cyrene.
The fourth project concerns excavations in the Sanctuary of Apollo in Touballos, Nea Paphos directed by Prof. Filippo Giudice of the University of Catania.

This is the longest ongoing Italian archaeological mission in Cyprus, which dates back to 1988, and has been excavating and studying one-fourth of Nea Paphos, one of the most important cities in the Hellenistic-Roman Orient and a long-time capital of Cyprus.

This year a work will be published to celebrate its more than 25 years of research, highlighting its many findings which include a fragment of a marble inscription which supports the scriptures on Saint Paul’s links to Cyprus, a surgical instrument and various religious objects, as well as an ancient 72-metre length of road, a staircase, a very long corridor (dromos) and various chambers.

Professor Giudice has challenged the hypothesis that the quarter was a military camp – the site is widely referred to as Garrison’s Camp – arguing, based on many years of excavation and study, that it was actually an area of great hypogeal pagan sanctuaries, the scene of a great struggle between paganism and an upstart Christian religion.

Barcelona van attacker may still be alive, on the run