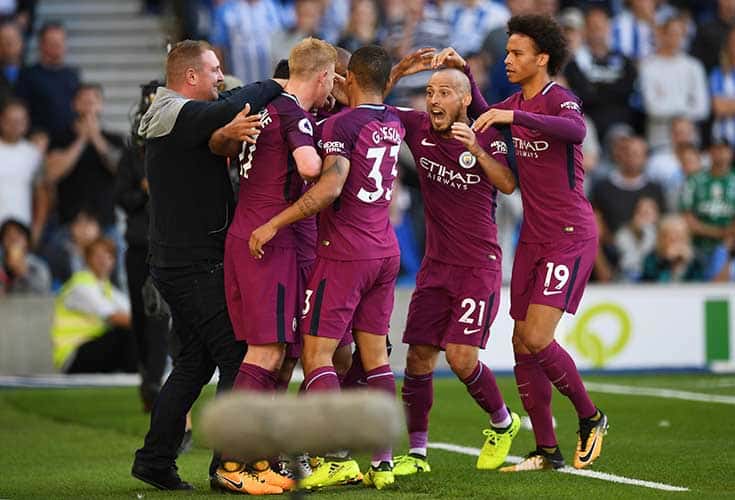 After a first week in the Premier League that saw the champions Chelsea toppled and 31 goals flying in, the victories by Manchester‘s clubs on the opening weekend suggested they could be the teams to chase this term.

The rivals are book-ending week two, with United at Swansea City in Saturday’s lunchtime game and City testing Everton’s new big-spending resolve on Monday. That should provide an even better feel for their credentials.

Jose Mourinho’s United put four past West Ham United and Romelu Lukaku quickly demonstrated his intent to be crowned the league’s top scorer, after just missing out last year, with an accomplished double.

Just as impressive was the performance of Pep Guardiola’s City, who broke down the newcomers Brighton & Hove Albion with the pairing of Sergio Aguero and Gabriel Jesus promising much.

German international Ilkay Gundogan is back in the frame for them, too, after a long-term injury as the summer’s 200 million-pound big spenders face an Everton side who have been splashing out again themselves by signing Gylfi Sigurdsson.

Still having to prove they have enough goals in them after the departure of Lukaku, manager Ronald Koeman declared on Wednesday that the Icelander is the man to “bring productivity” to the Toffees after Lukaku’s departure.

The big question marks have all been down at Stamford Bridge this week following their home loss to Burnley.

They ended up with nine men and the first glimpse of deja vu for Blues faithful who can’t bring themselves to believe their title defence under Antonio Conte will go the same way as the last one, under Mourinho, two years ago.

With injuries and suspensions to the dismissed Gary Cahill and Cesc Fabregas, a visit to old foes Tottenham Hotspur on Sunday is the sort of demanding follow-up Conte might have hoped to have been spared so early in the campaign.

Yet could Spurs’ brave new world at Wembley Stadium, as they wait for their new White Hart Lane home to be finished, prove an Achilles heel? If their wretched Champions League experiences there last season are anything to go by, it could be.

Liverpool’s win in the Champions League qualifier at Hoffenheim was just the tonic they needed to forget the saga of whether Philippe Coutinho would stay or head for Barcelona. Instead, they could revel in home-grown teenager Trent Alexander-Arnold’s goal-scoring in Germany.

They now seek their first league win of the campaign against Crystal Palace, who were left reeling by a woeful debut under Frank De Boer in the 3-0 defeat at home to Huddersfield Town.

The Terriers, hardly able to credit such an emphatic victory in their first match in the top flight for 45 years – which saw them briefly top the table until Manchester United’s win – now have the chance to make it, in contrast, a pointless start for fellow newcomers Newcastle United at Kirklees Stadium.

Arsenal visit Stoke City, so often a fixture with the feel of a proper culture clash, and they will be counting on new signing Alexandre Lacazette to hit the target again. Lacazette scored after just 94 seconds of his debut in the 4-3 win over Leicester City.

Excavations at two mass graves to start next month

Teams battle for glory as Cyprus championship kicks off