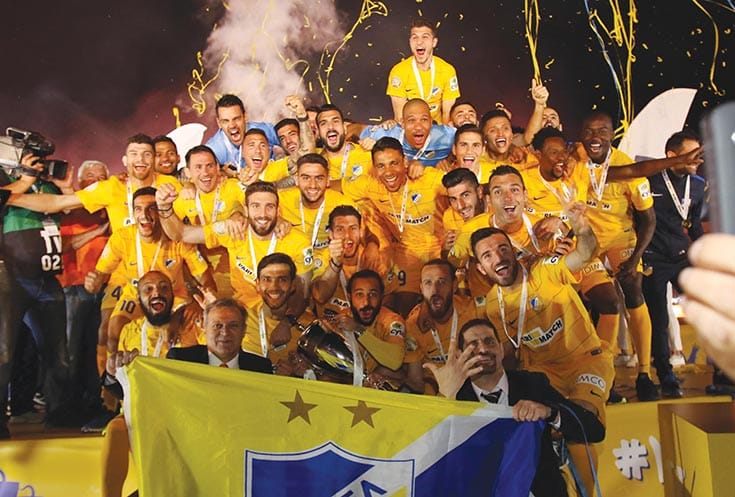 The 79th football championship kicks off this weekend with just four of the scheduled seven games taking place due to the postponement by the Cyprus Football Association (CFA) of  three fixtures involving the three Cyprus teams (Apoel, Apollon, AEK) battling in Europe  for a place in the group stages of the Champions League and the Europa League next week.

There will be at least one important change regarding this year’s championship.

The CFA has decided that this season three teams will be relegated to the second division while only one will be promoted to the top flight, thus reducing the number of teams from 14 to 12 in an effort to make the championship more competitive the following season.

Another more important change has been mooted in the past few days but so far not confirmed by any official body and this concerns the lifting of anonymity by the showing of one’s identity card to gain entry into a football ground, especially for high risk games.

Some things though will not change, at least for now in Cypriot football.

For yet another year clubs have been busy in the transfer market, with the 14 first division sides signing more than 150 players since June.

On average, each team will have eleven new players in their squads and if we exclude the two teams hit by transfer bans, Ethnikos Achnas and Olympiakos, then almost 13 new players were signed by each team and we still have almost two weeks till the end of the transfer period (31st August). In 2015-2016 season Cyprus teams averaged a total of 14 signings.

Champions in the transfer market so far have been Ermis, Aris and Doxa with a staggering 17 new players while the least transfer happy clubs (excluding Olympiakos and Ethnikos Achnas) are AEK Larnaca and Paphos FC.

According to a report by the CIES Football Observatory the Cyprus league leads the way for all the wrong reasons.

Cyprus teams have the oldest average squads at 28.5 years, the least playing time for home-grown players (only 24.5 per cent) and the second worst record with regards to actual time a player spends at a club.

The teams that finished in the top three last year, Apoel , Apollon and AEK are once again favourites to battle it out till the end.

After an admittedly poor start in Europe, champions Apoel sacked their Dutch coach Mario Been after just a couple of months and replaced him with an old acquaintance, Greek Giorgos Donis, who coached the champions between 2013-2015.

Apoel have re-signed Carlao from Torino, one of the best defenders to have graced the Cyprus grounds, while a lot is expected from another close-season signing, Mikael Pote, a former player of bitter rivals Omonia and top scorer in 2014-2015 season.

AEK made the shrewdest signing so far after their technical director Havier Roque managed to convince 30-year-old Nacho Cases to sign for the Larnaca team. Cases played a total of 177 for the Primera Division side Sporting Gijon and his experience could prove decisive in AEK’s silverware quest.

The dark horses for the championship are Omonia. Under new coach Pambos Charalambous and 13 new players they appear to be on the ascendancy after a long barren period. The expectations are high amongst their vociferous and demanding fans with more than 8.500 turning up to watch them in a friendly game on a hot August night.

AEL and Anorthosis should complete the top-six group.

Five teams will battle it out at the wrong end of the table with Olympiakos favourite for a swift return to the second division as they were unable to make any transfers.

Two out of Doxa, Aris, Ethnikos and Paphos FC will probably join the team from ‘Taktakalas’.

Nea Salamina and Ermis Aradippou will confirm their tag as perennial inbetweeners while I expect newcomer Alki to remain free of any relegation woes.

Man City out to show why they’re Premier League favourites