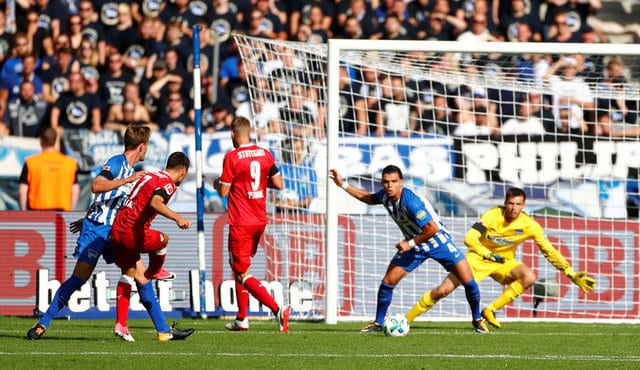 There was more good news for Dortmund with Mario Goetze making his comeback after half a year out following a metabolic disorder and the Germany international set up 18-year-old Christian Pulisic after 22 minutes for the first goal at the Volkswagen Arena.

The absence of suspended Ousmane Dembele, who missed training last week amid speculation about a possible move to Barcelona, was quickly forgotten as Marc Bartra doubled the lead five minutes later against a dazed Wolfsburg defence.

With the Wolves cornered, Dortmund kept up the pressure and Pierre-Emerick Aubameyang, last season’s Bundesliga top scorer, added a third on the hour.

“I am very satisfied. A 3-0 win at Wolfsburg is a very good result,” Bosz said. “Overall we delivered a very good team performance and that is important.”

“Christian Pulisic is still very young but he did really well today,” Bosz said of the American teenager. “Not only because of the goal. He was everywhere today.”

Champions Bayern Munich are also on three points after Friday’s 3-1 victory over Bayer Leverkusen. An 84th-minute deflected effort from Andrej Kramaric gave Hoffenheim, who face Liverpool next week for a spot in the Champions League group stage, a 1-0 win over Werder Bremen.

Australian Mathew Leckie struck twice for new club Hertha Berlin as they beat promoted VfB Stuttgart, back after a season in the second division, 2-0.

Schalke, with 31-year-old coach Domenico Tedesco making his Bundesliga debut, scored once in either half to beat Leipzig 2-0 with the visitors’ sensational league run last season already a distant memory.

Nabil Bentaleb put them ahead with a 43rd minute penalty before Yevhen Konoplyanka, who had scored twice in the German Cup on Monday, struck to finish Leipzig off.

Nicolai Mueller’s goal gave Hamburg, who suffered a shock first-round exit in the German Cup last week, a 1-0 win over Augsburg for their first victory at the start of the season in seven years.

Promoted Hanover 96 won by the same scoreline, with Austrian Martin Harnik on target against Mainz 05.