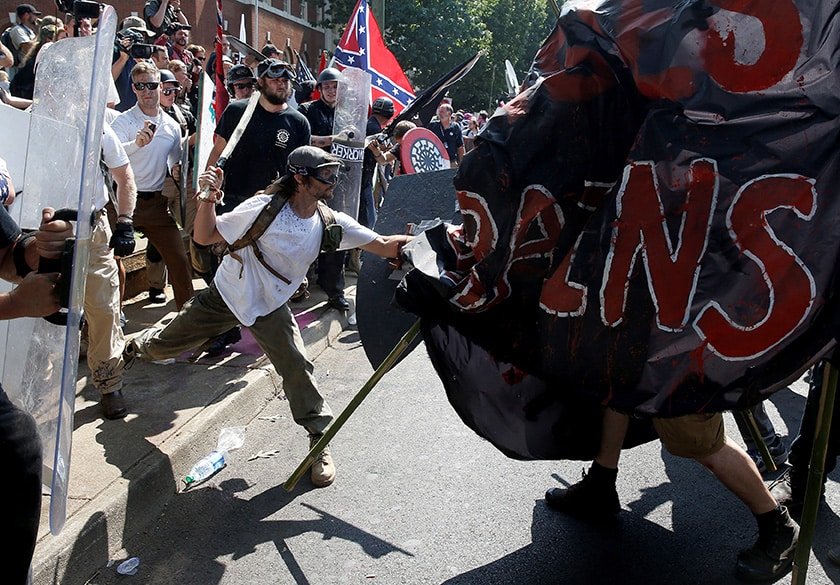 The Ku Klux Klan experienced some of that growth. But there was also a new generation of white nationalists whose goal was to go mainstream. They wore preppy clothes and claimed they were simply trying to save “European culture” from an ascendant multi-cultural left. They adopted some of the rhetoric of the civil rights movement, insisting that “white lives matter”. And they expressly targeted young people for recruitment. Mainstream conservatives, like College Republican chapters, sometimes welcomed them with open arms, even hosting “alt-right” speakers like Milo Yiannopoulos.

Meanwhile, Trump, his party and major conservative media figures minimised the threat of these homegrown radicals. According to a US Government Accountability Office report to Congress, the US Extremist Crime Database recorded a total of 62 fatal “far right extremist-motivated attacks” between September 12, 2001 and December 31, 2016. In contrast, there were 23 fatal assaults by militant Islamists over the same period.

Long before Trump blamed the violence in Charlottesville on “many sides,” he had established a clear pattern of condemning Islamist militants  – including an attack that never happened – while ignoring violence by white supremacists. And he enshrined this myopia in policy. In February, Reuters reported that under Trump, a government programme to counter violent extremism would focus only on Muslims and “no longer target groups such as white supremacists who have also carried out bombings and shootings in the United States”.

On Saturday, hours before he allegedly killed a local Charlottesville activist and wounded 19 others, 20-year-old James Alex Fields Jr marched with a white supremacist group called American Vanguard. The group, which disavowed any connection to Fields, was one of three – along with Identity Evropa and American Renaissance – that were singled out in April by the Anti-Defamation League for their “unprecedented outreach effort to attract and recruit students on American college campuses.” Last month, Jason Wilson reported for the Guardian that many attendees at American Renaissance’s annual convention were “millennials” who “lined up for selfies with Richard Spencer, the president of the white nationalist National Policy Institute think tank.”

Jared Taylor, the founder of American Renaissance, told Wilson that his group was being flooded by “hopping mad” young “white guys” who “have been told from infancy that they are the villains of history.”

The rioting and vehicular homicide of neo-Nazis in Charlottesville wasn’t the first time these hopping mad young white guys have turned violent. Fields allegedly perpetrated the fifth attack by white supremacists in the past 26 months. In total, these “lone wolves” were responsible for killing 13 people and wounding 28 others.

Dylan Roof was 21 and heavily steeped in online racism when he killed nine black church-goers in Charleston in 2015. Allen Scarsella was 22 when, in 2015, he shot and wounded five Black Lives Matter protesters in Minnesota. Scarsella claimed self-defence, but a judge found that he “was deeply racist as evidenced by months of racist messages he had sent to friends leading up to the shooting”, according to CBS. Prosecutors couldn’t prove that 22-year-old Sean Christopher Urbanski committed a hate crime when he stabbed a young black man named Richard Collins to death in an unprovoked attack earlier this year, but he did belong to a neo-Nazi Facebook group that prosecutors described as “despicable”.

A week later, shortly after bringing a baseball bat to a “free speech rally” in Portland, Oregon, 35-year-old Jeremy Joseph Christian, described as a “known white supremacist”, stabbed three men who attempted to intervene as he berated two women wearing hijabs on a local bus, killing two of them, though he was an anti-Trump Bernie Sanders supporter.

We can expect more attacks like these in the future. Todd Blodget spent two years working undercover in the white supremacist movement for the FBI. Asked by the Washington Post what kind of person is attracted to these groups, he said, “as a general rule, losers…. It’s often a kid — usually a male, but sometimes a female — who cannot make it in school. He blames all of his problems on someone else, and when they log onto a Web site like this or they go to a meeting like this or they pop in American Resistance records (the leading label for neo-Nazi and white supremacist bands) and it blames other people they already don’t like for their problems, they think, ‘There you go. That’s why I’m a dropout. That’s why I’m smoking crystal meth…That’s why I can’t get a job and hold it. It’s all because of black people.’”

Take out the crystal meth, and it sounds a lot like the pattern of radicalisation that we’ve heard so much about in Muslim communities in France, Belgium and the UK. And in Europe, they’re treating it as such. In June, the Independent reported that referrals of non-Muslim extremists to the UK’s anti-radicalisation programme increased 30 per cent in the past year, and now “just under a third of all people being monitored” by the British government “believe in extreme right-wing ideologies and are vulnerable to radicalisation”.

But in the US, it’s a different story. Mainstream conservatives have consistently balked at any effort to even acknowledge the problem, much less counter it. In 2009, when the Department of Homeland Security (DHS) issued a report on right-wing domestic terrorism, House Minority Leader Rep John Boehner berated DHS director Janet Napolitano for using the “term (terrorist) to describe American citizens who disagree with the direction Washington Democrats are taking our nation”.

DHS and the FBI have continued to warn of the danger these extremists pose, and conservatives have continued to push back – none with more zeal than Donald Trump. In June, Trump’s DHS rescinded a grant for a group called Life After Hate that’s “dedicated to deradicalising neo-Nazis and stopping white extremism,” according to Politico. The grant was yanked despite the fact that “the group has seen a twenty-fold increase in requests for help” disengaging from extremist groups “since Election Day”. And alt-right activists have openly celebrated the fact that law enforcement has largely “given them space” since the election. The white nationalist movement is feeling energised and empowered. There will be more violence. More disaffected kids will be seduced into these violent ideologies. And so long as Republicans refuse to see the threat clearly, the government’s going to do too little to counter their radicalisation.

India and the sacred cow debate