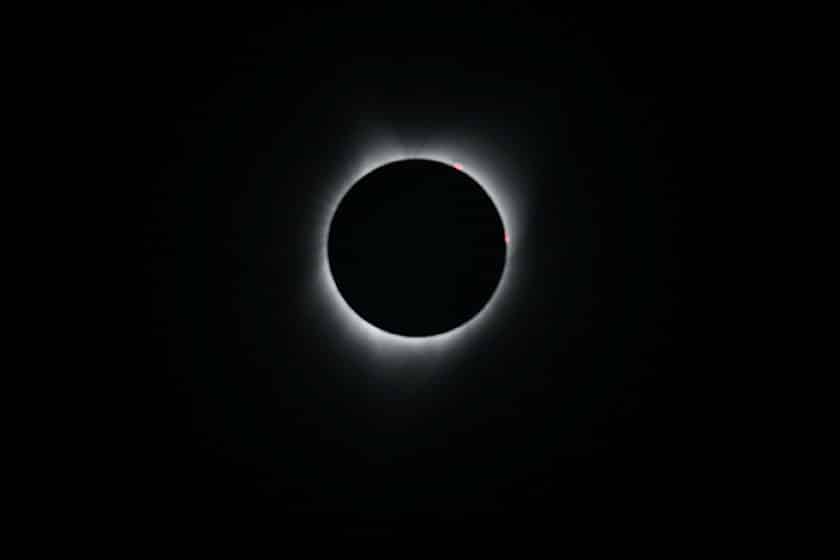 The moon blacked out the sun on Monday as the first coast-to-coast total solar eclipse in the United States in nearly a century began in western Oregon, while millions of Americans looked skyward in wonder through protective glasses, telescopes and cameras.

After weeks of anticipation, the sight of the moon’s silhouette passing directly in front of the sun, blotting out all but a halo-like solar corona, drew whoops and cheers from onlookers gathered in Depoe Bay, Oregon. The rare cosmic event was expected to draw one of the largest audiences in human history, including those watching through broadcast and social media.

Some 12 million people live in the 113-km-wide, 4,000-km-long zone where the total eclipse was to appear, while hordes of others travelled to spots along the route.

At Roshambo ArtFarm in Sheridan, Oregon, people aimed their cameras at the sky as the moon slowly ate its way across the midday sun, causing the air to cool.

“I’m really lucky we got to be here today,” said Jason Davis, 29, who got married on Saturday and decided to stop in Oregon for the eclipse. “It’s pretty cool. I’m sort of surprised by the temperature change.”

The eclipse first reached totality in Oregon at 10:15 a.m. PDT (1715 GMT) and began marching slowly eastward across the country. The phenomenon will take its final bow at 2:49 p.m. EDT (1849 GMT) near Charleston, South Carolina, where eclipse gazers gathered atop the harbour’s sea wall.

Nancy Conway, 57, an elementary school principal, said she and her family made the drive from Lynn, Massachusetts.

A number of towns within the total eclipse’s path set up viewing parties. At the Southern Illinois University campus in Carbondale, Illinois, the 15,000-seat football stadium was sold out for Monday.

“I woke up at 4am so I’m excited,” said Madeline Rubin, 17, who drove two hours to the stadium with others wearing T-shirts that said “I totally blacked out.”

The last time such a spectacle unfolded from the Pacific to the Atlantic was in 1918. The last total eclipse seen anywhere in the United States took place in 1979.

For millions of others outside the zone of “totality,” a partial eclipse of the sun will appear throughout North America, a spectacle that drew its own crowds.

BOC to raise provisions by €0.5bn in H1, sees no need for fresh capital