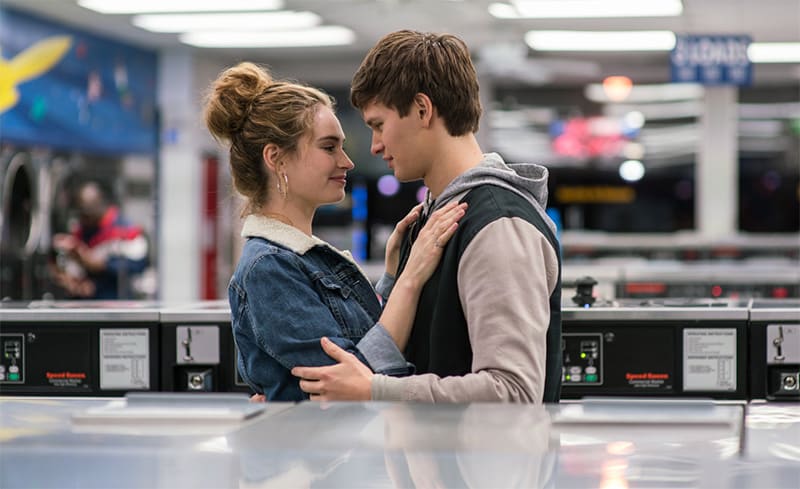 Quentin Tarantino – who gets a thank-you in the closing credits – famously opined that the scenes of violence in his films should be viewed like the dance numbers in old MGM musicals. Baby Driver makes this explicit, its hero Baby (Ansel Elgort) being a baby-faced getaway driver who self-consciously blasts songs on his iPod while he works, turning his heists into musical numbers. We see him in the pre-credits sequence, skidding expertly, running red lights, nimbly avoiding a spike-strip lobbed by the cops to deflate him – all to the strains of ‘Bellbottoms’ by the Jon Spencer Blues Explosion. Baby doesn’t just listen to the music, he moves to it; he sings along, his car seems to swerve in time with it, even his windshield wipers swing in sync with it.

There’s a great, exhilarating premise here – and it only gets better as director Edgar Wright makes it clear that our hero lives his life (not just his criminal activities) to music, walking down the street to ‘Harlem Shuffle’, casually tossing a rag in perfect sync with the “Yeah” in Lionel Richie’s ‘Easy’. It’s a bit like The Umbrellas of Cherbourg, the 60s musical where every line was sung, turning quotidian life into music. (At the other end of the scale, the concept of crooks carrying out robberies in time with pop songs was used in the early-90s Bruce Willis turkey Hudson Hawk.) But there’s also another level here – a metaphor for alienated modern youth, isolating itself behind its earphones. Baby is remote, withdrawn, implicitly asexual; sitting at a diner, he picks up (accidentally, but still) the children’s menu. Someday “you’ll get blood on your hands,” snarls a more hardened criminal. Someday he’ll have to come out from behind his protective jukebox and become an adult, not a baby.

Baby Driver is potentially a classic, but in fact it’s a near-miss. Part of the problem is the plotting, which becomes increasingly shaky (the rot probably sets in with a scene where the rest of the gang discover Baby’s tape recorder, and freak out excessively). The characters are Tarantino-esque, with Jamie Foxx in the ‘crazy mutha’ Samuel L. Jackson role and Kevin Spacey as a crime boss mixing equal parts ruthlessness and irony (“Wow,” he muses, poking fun at a crime-movie cliché: “I just drew a map in chalk while we were standing here talking”) – but Wright lacks Tarantino’s genius for lean, punchy narrative. The film wanders, and finally becomes a little tiresome.

The bigger problem, though, is that Baby-as-metaphor – that whole intriguing second level – remains unfulfilled. Our hero, it turns out, is a perfectly normal guy behind the earphones: sociable, cool, attractive to women. He’s no child, he’s been through a lot. The obsession with music isn’t a kind of autism; it’s a practical choice (Baby has tinnitus, and music covers the ringing in his ears) and a lifelong defence mechanism, music being what he used as a kid to block out his parents fighting. (Cars, too, are meaningful to him, since he lost his beloved mother in a car accident.) Baby Driver slackens as its hero becomes less weird, more conventionally vulnerable.

A colder eye might’ve helped here. Wright is a world-class film geek (his recent list of 1000 favourite movies, spanning the entirety of film history, would make the perfect primer for a teenage boy just getting into Cinema), and maybe he’s just too protective of this geeky young hero who supplies his own needle-dropped soundtrack and talks, self-consciously, in lines cribbed from movies. Not only does Baby get the girl – a waitress named Debora, with whom he discusses Beck’s ‘Debra’ vs. T-Rex’s ‘Debora’ – but she’s also a fantasy girl, a wish-fulfilment fantasy for geeks everywhere. “I can see you’re kind, and different,” she tells him. “And I’m here for you when you’re ready.” Female viewers may throw up, or just smile indulgently.

Still, you can’t really blame Baby Driver for loving its hero too much. This, after all, is a musical, and a certain romantic fuzziness is part of the package – though of course not an actual musical, just a potent blend (as in that Tarantino quote) of the buzz that comes from violence and the buzz that comes from music. It could’ve been better, and sharper, but it still taps into something – the effortless quality of genre pleasures – and is also your only chance to hear Kevin Spacey deliver the line “I did not hear the word ‘bananas’ tonight”. (I also liked the Asian gentleman of whom it’s said that “he put the ‘Asian’ in ‘home invasion’”.) In a multiplex wasteland where most films have no plot, no heart and no personal stamp, Baby Driver has a little too much of all three. There are worse things you could say about a movie.

5 reasons why you should only shop online