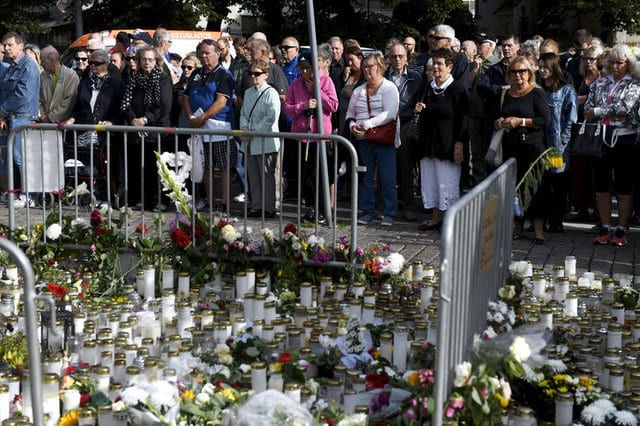 People attend a moment of silence to commemorate the victims of Friday's stabbings at the Turku Market Square in Turku, Finland August 20, 2017

An 18-year-old Moroccan asylum seeker will appear in court on Tuesday over a knife attack in the city of Turku that killed two women and wounded eight people in what police suspect is Finland‘s first terrorism-related assault.

The crimes are being treated as murder and attempted murder with terrorist intent, the court said. Police have requested that Mechkah be detained during preliminary investigations.

Detective Inspector Crista Granroth from the National Bureau of Investigation said police would ask the court to rule on the suspect’s detention in a hearing scheduled for 0800 GMT.

“We are prepared to arrange it via a video connection but that is up to his condition which will be determined by hospital personnel,” Granroth said.

Police earlier said the role of four other Moroccan men, detained over possible links to the Turku attack, was yet to be fully established.

No group has claimed responsibility for Friday’s attack, though police are investigating possible links to Thursday’s van attack by suspected Islamist militants in the Spanish city of Barcelona where 13 people were killed.

New season kicks off in Cyprus