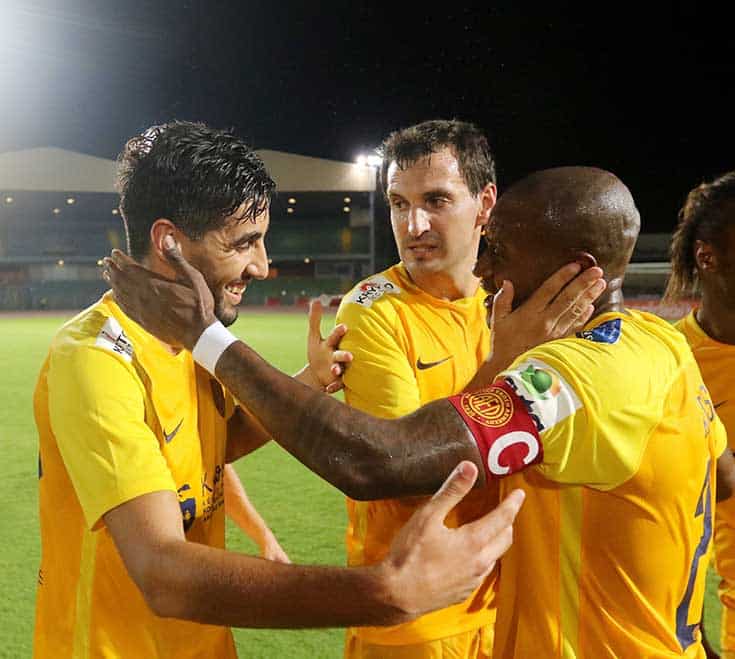 AEL players celebrate after the game

The Cyprus football championship got underway this weekend with AEL and Alki recording their first wins over Aris and Ethnikos Achnas, respectively. In the Famagusta derby Nea Salamina and Anorthosis shared the spoils in a 1-1 draw.

Anorthosis were the better side in the opening half and took the lead against Nea Salamina thanks to a 16th minute Rayios free-kick that evaded everyone and crept in at the far post.

In the second half though, Nea Salamina suddenly sprung to life with star signing Gaston Sangoy and Ruben Brigito showing their true qualities and creating a number of chances to level the score with the former rattling the cross bar with a fierce shot.

However, the best chance fell to Anorthosis’ Vladimir Ganchev, who after rounding goalkeeper Vezelofski, managed to hit the side netting from close range.

Three minutes later though Salamina were rewarded for their perseverance and equalised through Joel Damachou after a Sangoy cross.

The home side could have snatched all three points right at the end but Karo’s header came back off the crossbar with Anorthosis’ goalkeeper Arous well beaten.

In the Limassol derby AEL snatched the three points against Aris with practically the last kick of the game thanks to man of the match Sassy.

It was another well-balanced game with both sides missing a number of chances to take an earlier lead, the biggest one falling to Aris who had a penalty saved by AEL’s goalkeeper Vozinia.

Referee Nicolaou’s penalty decision infuriated AEL who felt that their defender Lafrance had played the ball and not Aris’ Medjedovic legs.

Justice was done eventually as the decision looked particularly harsh on AEL.

First division newcomers Alki were much the better side against Ethnikos Achnas and missed a host of chances to make sure of the three points before the break.

The only goal of the game came fourteen minutes from the end thanks to a brilliant long-range effort by Chafik Tigroudja.