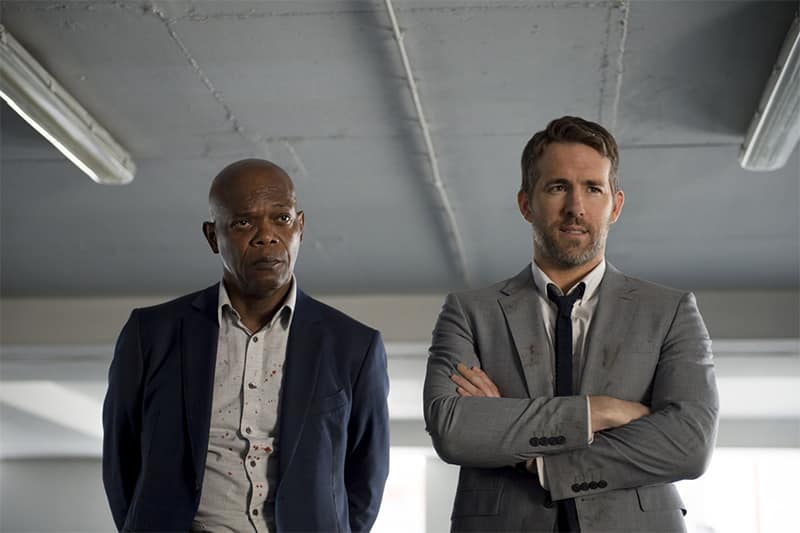 How did this get so ugly? The trailer made it look quite jolly – and the bar, after all, is pretty low: get two specialists in combustible exasperation, Samuel L. Jackson and Ryan Reynolds (hitman and bodyguard, respectively), cook up some manufactured plot where they have to get from A to B with the clock ticking, then watch the sparks fly. “My job is to keep you out of harm’s way.” “I am harm’s way!”. It’s not rocket science.

One sticking-point – apart from the aforementioned ugliness – is that the film is 118 minutes long. This is not necessarily fatal; Midnight Run, built on an equally mismatched action-comedy duo, ran 126 minutes – but Midnight Run hit complex character notes which The Hitman’s Bodyguard has no hope of reaching. Instead, the two hours are taken up with shoot-outs, occasional bickering and increasingly over-abundant action. The plot has Ryan having to transport Sam safely from ‘Manchester, England’ to the International Criminal Court in The Hague; there are stand-offs and shoot-outs in England, then a spectacular chase down a canal in Amsterdam, with boats and cars flying and crashing into each other. By this time our heroes are in Holland, so you’d imagine that the film is almost over, especially after such a massive set-piece – but in fact there’s another action set-piece in The Hague, just outside the ICC, then another one after they get in the courtroom and Sam delivers his testimony. It begins to seem endless.

Needless excess is the problem here, going big and flashy to disguise a central emptiness. The running-time is one example; the violence is another. This is very grisly for an action comedy – and again, it’s a matter of tone. There’s a scene where Eastern European dictator Dukhovich (Gary Oldman, in a rent-a-villain role that could’ve been played by anyone) stabs his pen through a minion’s hand out of sheer nefariousness – and director Patrick Hughes cuts to a close-up of the man’s bloodied hand, nailed to the table as he writhes in pain, then cuts to the close-up again for good measure, curdling any ‘good cheesy fun’ value the scene may have had. Even worse is a jokey flashback to Salma Hayek (as Sam’s wife) laying waste to a bar full of bothersome men to the gentle strains of ‘Hello’. The joke is that the hitman falls in love with her because she’s so violent – but a little restraint would’ve helped the joke: I knew I was smitten “when she severed a man’s carotid artery with a beer bottle,” recalls Sam fondly, a punchline spoiled by the yucky sight of said artery being severed on-camera, and blood spurting wildly.

Oh come on, says the young filmgoer, you’re being over-sensitive (or “whining like a bitch,” as Jackson puts it). Maybe so; but The Hitman’s Bodyguard is ugly, and its ugliness gets in the way. The violence is ugly. The details are ugly (another example: jailbird Salma makes her cellmate stand in the corner, a joke made ugly by the fact that the cellmate is a scared-looking, morbidly obese young woman as opposed to, say, a hard-bitten crone). Even the look is often ugly, lit or graded in a plasticky way that makes the image pop out unnaturally. Don’t get me wrong: a certain ugliness is par for the course. You expect a violent action film with Sam Jackson in peak Sam Jackson mode to be in-your-face and belligerent, and I’m fine with that (I was even looking forward to it, based on the trailer). But the balance is off here.

To be fair, the trailer doesn’t exactly lie. Jackson and Reynolds work well together, coming off like Felix and Oscar in The Odd Couple – the bodyguard prissy and meticulous while the hitman is reckless and impulsive – though Reynolds, fresh from Deadpool, is too sardonic to be merely a straight man. Their banter isn’t deep, but it has its moments. Sam declares himself to be not a fan of wearing underwear – “They call them ‘swinging dicks’ for a reason” – and mocks Ryan’s romantic credentials: “I’ve eaten hamburgers that know more about women than you”. The jokes run to playground insults, plus a ‘plethora’ gag out of Three Amigos. When in doubt, our heroes simply yell at each other: “Have you ever said ‘please’?” “Please, motherf**ker!” “Why are we always yelling???”

It’s late August, and standards are low. At 90 minutes, with less graphic violence, this might’ve gotten a (reluctant) thumbs-up as acceptable mindless entertainment. As it is, however, the pleasure-to-tedium ratio is low in The Hitman’s Bodyguard. Two exceptions, just to end on a positive note: Richard E. Grant as a wild-eyed cokehead lawyer who babbles enjoyably and complains that Ryan’s car smells like “arse”, and the fact – speaking of Ryan’s car – that he pees in a juice bottle early on, then leaves the bottle lying around in his car. I spent the whole film waiting for the inevitable moment when an unsuspecting someone would drink it – but amazingly, given the general ugliness, no-one does. Small mercies, silly movie.

Veteran obstetrician speaks a language of his own