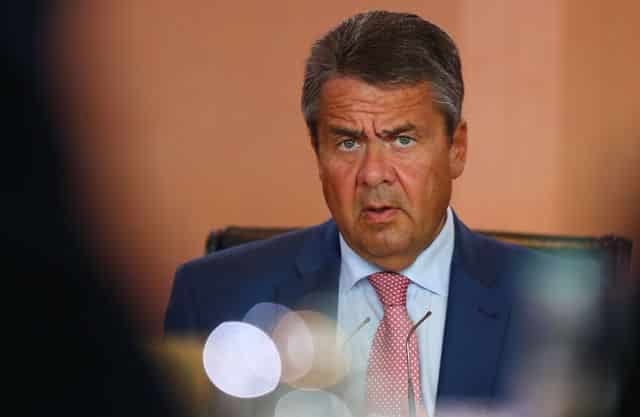 Germany’s foreign minister Sigmar Gabriel said Berlin and the rest of Europe should back the “democratically minded” majority of Turks who did not support President Recep Tayyip Erdogan, in a dramatic hardening of Germany’s position towards Ankara.

His remarks, at a campaign event for his Social Democratic Party (SPD), come amid sharply deteriorating relations between the NATO allies, after Erdogan urged German Turks to boycott Germany’s main parties in next month’s election.

“More than half the country is democratically minded. They didn’t support him,” Gabriel said at the meeting in the western Saarland region, according to the foreign ministry.

“I believe that many in Turkey are counting on Europe and Germany supporting Turkish democracy and not looking on helplessly.”

The remarks, coming after Erdogan told Gabriel to “know his place” and describing Germany’s main parties as “enemies of Turkey”, are likely to anger Turkey.

Erdogan accuses Germany of harbouring plotters behind last year’s bloody coup attempt against Erdogan. Turkey has arrested 50,000 in a crackdown, including European-Turkish citizens. Western politicians say the dragnet is a pretext for Erdogan to rid himself of his opponents.

Lawmakers from Chancellor Angela Merkel’s Christian Democrat party and the Left party on the other end of the political spectrum urged the government to consider freezing the foreign assets of Erdogan and his inner circle.

“We need immediate and direct sanctions against Erdogan and his associates,” said Sevim Dagdelen, foreign affairs spokesman for the Left party.

Home to some 3 million people of Turkish descent, Germany has traditionally had good relations with Turkey, which is also a major trade partner and tourist destination for German sun-seekers.

But, with parliamentary elections due on Sept. 24, current tensions have badly dented Turkey’s image in Europe’s largest economy.

In his remarks on Monday evening, Gabriel was cautious on sanctions, saying that Germany did not want inadvertently to hit “the small restaurant owners and waiters on the west coast.”

The latest escalation in Ankara’s war of words with Berlin was triggered by Turkey’s use of an Interpol red notice to have Turkish-German writer Dogan Akhanli arrested in Spain. Accused of terrorism, Akhanli has been released but must remain in Spain while authorities assess Turkey’s extradition request.

“I always thought I was safe in European countries and that the long hand of arbitrary arrogance couldn’t reach me here,” said the activist, who spent long periods in jail for left-wing activism before fleeing Turkey in 1991.