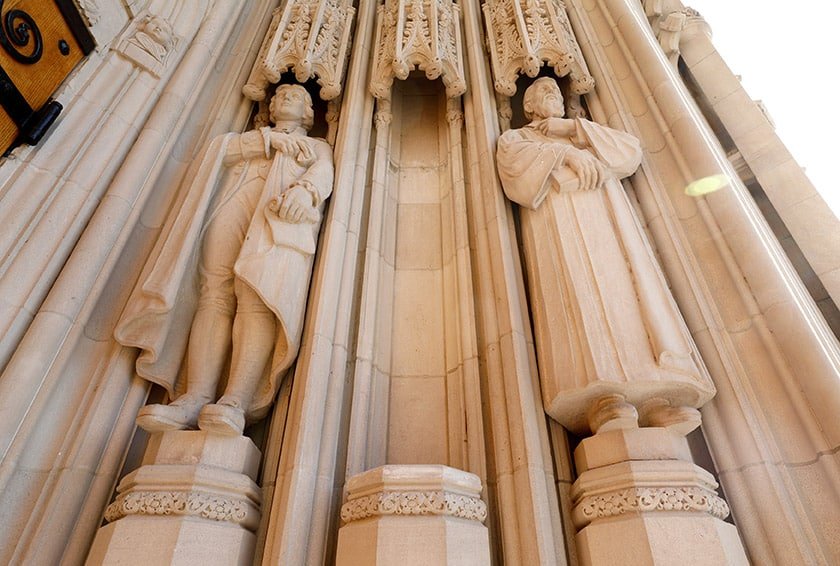 The empty plinth where a statue of Confederate commander General Robert E Lee once stood sits between statues of Thomas Jefferson and the poet Sidney Lanier at the entrance to Duke University's Duke Chapel after officials removed the controversial statue early Saturday morning in Durham, North Carolina

Statues live. The Robert E Lee statue in Charlottesville certainly does. The majority of Americans, including his fellow Republicans, disapprove of Donald Trump’s defence of Confederate monuments and his tardiness in condemning the white supremacists whose protests against a decision to remove the general’s statue led to the violence that killed a woman demonstrating against them.

Mayors in several cities, including Dallas in Texas, Lexington in Kentucky and Jacksonville in Florida said they were preparing to remove Confederate statues. In Durham, North Carolina, protestors lassoed a century-old statue of a Confederate soldier and pulled it off its plinth; several were later arrested. The mayor of Baltimore, Catherine Pugh, ordered the overnight removal of Confederate monuments, arguing that “it was in the best interests of my city.” On Friday, Maryland authorities removed the statue of a 19th-century chief justice who wrote a decision in favour of slavery.

Momentous as the fallout from the Charlottesville rally and battle has been, it’s part of a global trend. Though set in marble or bronze, meant to last and impress through the ages, statues everywhere now show themselves to be porous, forced open to controversy, challenge and the bitterness of collective memory. Some statues are removed in the heat of a moment – as was one of Saddam Hussein in Baghdad as his armed forces collapsed in 2003, and one of KGB founder Felix Dzerzhinsky from outside the organisation’s headquarters in Moscow in 1991, as the Soviet Union also collapsed. Others, as now, remained to be held to contemporary, often hostile, account.

South African protestors have been to the fore in this movement. Their “Rhodes must fall” campaign targeting white imperialists and centring on a statue of Cecil John Rhodes on the campus of the University of Cape Town, succeeded in having the monument removed.

Germany was purged of its Nazi iconography (much had been destroyed by the war’s end by explicit order of the Allied occupiers, who issued an order in May 1946 that “every existing monument, memorial, poster, statue, edifice, street or highway name marker, emblem, tablet or insignia” must be destroyed by 1 January 1947.) Italy was not. Fascist architecture and monuments, including paintings, frescoes and mosaics glorifying fascism, usually by associating it with classical Rome, remain.

In Mussolini’s birthplace, the small town of Predappio, shops line the main street selling fascist memorabilia and pamphlets. An ornate underground tomb holds the dictator’s remains; a bust stands in the grounds of a villa where he lived and pro-fascists parade up and down the streets, venerating the tomb. The town’s mayor, Giorgio Frassineti, has raised funds to build a museum spelling out the truths, as against the myths, of fascism in an attempt to rescue the town’s civility.

Other villains, with more blood on their hands than Lee or Rhodes, still have their places of honour. Statues of Russia’s Joseph Stalin are displayed in a museum in his Georgian birthplace of Gori and elsewhere. In China, a solid gold statue worth some $20 million stands in Chairman Mao’s birthplace of Shaoshan, with hundreds of other less expensive monuments all over China.

In a lower key, London’s many statues of British imperial soldiers and administrators are largely undisturbed. In 2000, left-wing London mayor Ken Livingstone suggested that statues of General Sir Henry Havelock and General Sir Charles Napier be removed from their plinths in Trafalgar Square because he did not know who they were. Both were imperial soldiers. Havelock helped put down the Indian mutiny of 1857, an exercise that cost at least 800,000 their lives; Napier, after suppressing working class uprisings in England, went to what is now Pakistan to suppress local uprisings there. In spite of Livingstone’s remarks, both still stand – as does a statue of Rhodes at his alma mater in Oxford.

The argument for tearing down statues of those now regarded as leaders of imperialist expansion and/or racists is straightforward: they continue to act as reference points for those who view them not with aversion but with admiration. Those who honour them identify themselves with the figures they regard as heroes of history, and gain strength and confidence through the identification.

The competing argument is that to destroy these monuments is to lose part of an understanding of history itself. Yet merely standing as they have for decades, or centuries, is not now enough. Instead, they should be attended by explanation, debate and opposing views, even “opposing monuments”. Stalin, for example, could be confronted by a statue of the great dissident Alexander Solzhenitsyn, or the figure of an emaciated survivor of the gulag.

Another option: harnessing technology. The filmmaker David Peter Fox came up with the idea of using mobile phones as a teaching device after taking his children to see a statue of Danish writer Hans Christian Andersen in Copenhagen. The app is activated when in the proximity of the statue to play a recording explaining the background of the memorial. The idea is now spreading to Berlin, London, Helsinki, Chicago and New York.

A phone app will not quell the fallout from Charlottesville. It is a pointer, as well as a compromise. If extended and expanded, it could allow an understanding of why controversial figures were once regarded highly, and give space to the reasons why they are not so seen, by many, now. It is sure to be scorned by activists. But it speaks to reason, and may help to avoid what presently threatens to be an escalation of hate.

Our View: EU not likely to allow Pentakomo fiasco to go on much longer