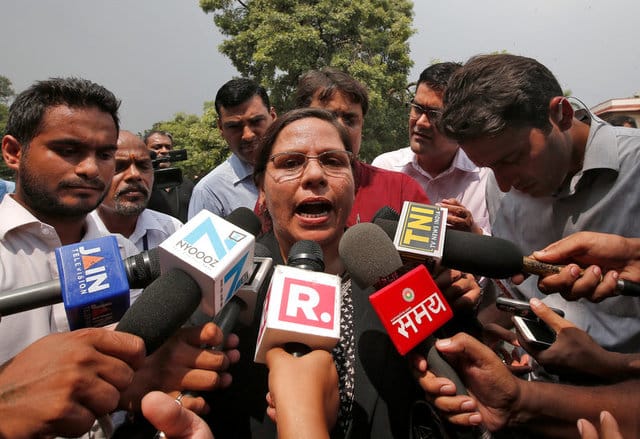 Farha Faiz, a lawyer, speaks with the media after the verdict for the controversial Muslim quick divorce law outside the Supreme Court in New Delhi

India’s Supreme Court on Tuesday ruled a controversial Muslim instant divorce law unconstitutional, a landmark victory for Muslim women who had long argued that it violated their right to equality.

The law allows Muslim men to divorce their wives simply by uttering the word “talaq” three times. Muslim women say they have been left destitute by husbands divorcing them through “triple talaq”, including by Skype and WhatsApp.

Under the ruling, the government will need to frame new divorce legislation, which would replace the abolished practice of triple talaq.

“Finally, I feel free today,” Shayara Bano, who was divorced through triple talaq and was among the women who brought the case, told Reuters after the ruling.

“I have the order that will liberate many Muslim women.”

The ruling was delivered by a panel of five male judges from different faiths – Hinduism, Christianity, Islam, Sikhism and Zoroastrianism.

Three of the five ruled that the practice was unconstitutional, overruling the senior-most judge in India, the chief justice.

He announced a suspension of the practice, and told the government to come up with a new law within six months.

Many Muslim countries have banned the practice of triple talaq, including neighbouring Pakistan and conservative Saudi Arabia.

Opposition to the law helped forge an unlikely coalition of Muslim women and Prime Minister Narendra Modi and his ruling Hindu nationalist party, which wanted the law quashed, and pitted it against Muslim groups that say the state has no right to interfere in religious matters.

Some fear that the Hindu majority is trying to limit Islamic influence in society. Muslims make up about 14 percent of India’s 1.3 billion people.

Two of the judges said triple talaq was “arbitrary” and violated fundamental rights. Justice Kurian Joseph said the practice was not “integral” to the Muslim faith.

Opponents of the law have toiled to abolish it for decades and were given a boost last year when Modi threw his support behind Bano, calling the law derogatory and discriminatory against women.

Modi hailed the judgment as “historic.”

“It grants equality to Muslim women and is a powerful measure for women empowerment,” he said in a tweet.

Tuesday’s ruling could spur Modi’s party to push again for its long-held desire for a uniform civil code, which would end the application of religious laws to civil issues.

“The Supreme Court has a right to interfere in the personal space and they have done so,” said Maneka Gandhi, minister for women and child development.

Some Muslim institutions have said that while triple talaq is wrong, the law should be reviewed by the community itself.

The All India Muslim Personal Law Board said it would contest the court’s decision.

“The fact that only three of the five judges have deemed the practice illegal shows that there was no clear decision,” member Maqsood Hasani Nadvi said.

McGregor win would be ‘dreadful’ for boxing, says Horn