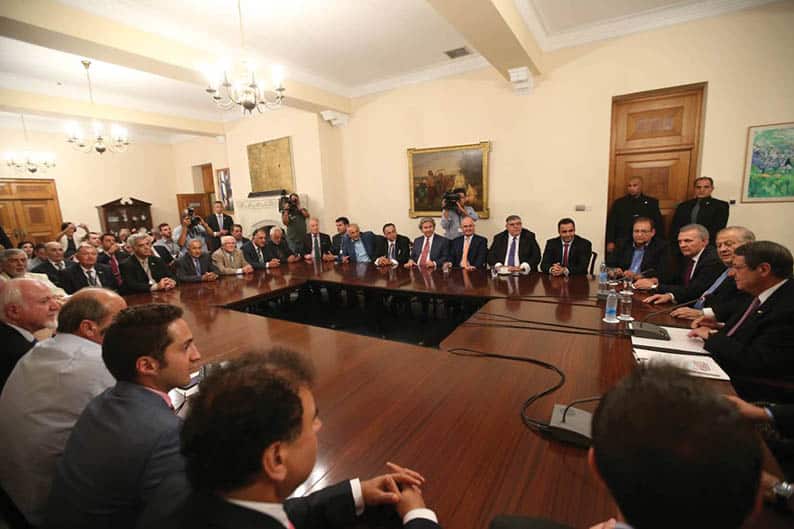 Overseas Cypriots were briefed on Tuesday by members of the government over the state of affairs on the island ranging from the Cyprus problem, hydrocarbons, the economy and the island’s involvement in space exploration.

In the 19th annual conference taking place at the Filoxenia conference centre in Nicosia, members of Pomak (world federation of overseas Cypriots) and Pseka (justice for Cyprus) gave presentations on activities they took across the world in a bid to raise awareness on issues of expatriates, the Cyprus problem and the economic crisis.

Head of Pseka, Philip Christopher, in an interview with CyBC said a major campaign needs to be undertaken that will highlight the Cyprus problem as that of an invasion and occupation, rather than how it has been portrayed since 1977, that of a problem between Greek Cypriot and Turkish Cypriot communities.

Specifying he was against a bizonal bicommunal federation, he commented on Turkish Cypriots and their leader Mustafa Akinci.

“At the moment 100,000 Turkish Cypriots have passports of the Republic of Cyprus and all the advantages that come with it. Yet, the flag (of Turkey) is still waving on Pentadaktylos and if Mr. Akinci really wants to negotiate he should have the strength to resist Turkey, which is also placing Turkish Cypriots under occupation.”

Christopher said they had received a lot of support from President Nicos Anastasiades however the organisations had no political affiliations. “Our political party is Cyprus.”

After the organisations presented financial reviews and reports of their audit committees, delegates were briefed by political parties on the Cyprus problem.

on the tripartite cooperation of Cyprus and Greece with Israel and Armenia on diaspora matters.

Fotiou added that the tripartite cooperation with Israel has made significant progress, noting that Israeli Prime Minister Benjamin Netanyahu had given instructions to further intensify the cooperation.

Praising the diaspora in America, he said their example should be followed by those in Britain.

Fotiou said that Cyprus and Greece are also considering Egypt’s suggestion to put matters concerning the diaspora under the umbrella of the tripartite co-operation of the three countries.

Finance Minister Harris Georgiades, spoke to the delegates on Cyprus’ economy while Energy Minister Giorgos Lakkotrypis briefed them on hydrocarbon issues and the island’s energy policy.

Delegates were also briefed by the unit of administrative reform and the department of information technology services on the government gateway portal ‘Ariadni’, which enables the use of government services available online.

Delegates were set visited the presidential palace in the afternoon and were briefed by Anastasiades followed by a reception.