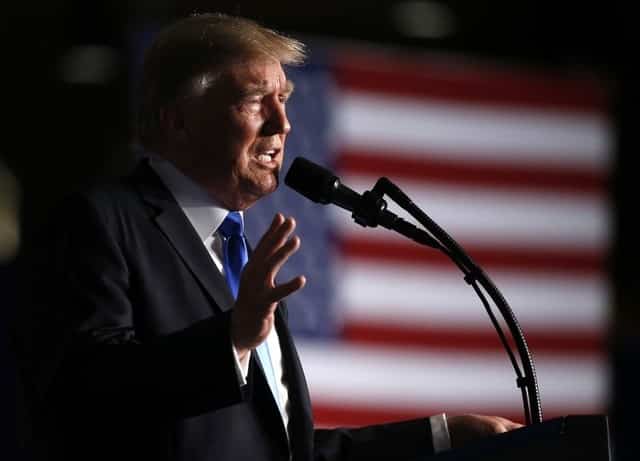 U.S. President Donald Trump announces his new strategy for the war in Afghanistan during an address to the nation from Fort Myer, Virginia

President Donald Trump committed US troops to an open-ended war in Afghanistan, a decision the Afghan government welcomed on Tuesday but which Taliban insurgents warned would make the country a “graveyard for the American empire”.

Trump offered few specifics in a speech on Monday but promised a stepped-up military campaign against the Taliban who have gained ground against US-backed Afghan government forces. He also singled out Pakistan for harboring militants in safe havens on its soil, an accusation it denies.

While Trump said he would not discuss troop levels or details of the new strategy, US officials said on Monday he had signed off on Defence Secretary James Mattis’ plans to send about 4,000 more troops to Afghanistan.

Trump said “my original instinct was to pull out” all American troops but he was convinced by his military advisers after a lengthy review of the United States’ longest war.

“The consequences of a rapid exit are both predictable and unacceptable,” he said. “A hasty withdrawal would create a vacuum that terrorists, including ISIS and al Qaeda, would instantly fill.”

While Trump said “our troops will fight to win”, he also stressed that ultimately Afghanistan’s police and army must to most of the fighting to defeat the Taliban and allied Islamist militants.

“The stronger the Afghan security forces become, the less we will have to do. … We want them to succeed.”

Most of the approximately 8,400 US troops in Afghanistan work with a NATO-led training and advising mission, with the rest part of a counter-terrorism force that mostly targets pockets of al Qaeda and Islamic State fighters.

Afghan President Ashraf Ghani welcomed the strategy saying it would expand the training mission for Afghan forces, which includes building its fledgling air force and doubling the size of the Afghan special forces.

“I am grateful to President Trump and the American people for this affirmation of support … for our joint struggle to rid the region from the threat of terrorism,” Ghani said in a statement.

“If the US does not pull all its forces out of Afghanistan, we will make this country the 21st century graveyard for the American empire,” Taliban spokesman Zabihullah Mujahid said in a statement.

US-backed Afghan forces overthrew the Taliban’s hard-line Islamist government in late 2001 over its sheltering of al Qaeda chief Osama bin Laden, architect of the Sept. 11, 2001, attacks in US cities that killed nearly 2,000 people.

But US forces have been bogged down ever since in a war that has vexed three presidents. About 2,400 US troops have died in Afghanistan.

Trump, who had criticized his predecessor for setting deadlines for drawing down troops in Iraq and Afghanistan, declined to put a timeline on expanded US operations in Afghanistan.

Former President Barack Obama’s deadlines for troop decreases brought the US military footprint from about 100,000 in 2011 to 8,400.

“Our future presence will be based on conditions and not arbitrary timelines,” the top US commander in Afghanistan, General John Nicholson, said in a statement.

Trump warned on Monday that US support “is not a blank check” for Afghanistan’s often-divided and corruption-plagued government and insisted he would not engage in “nation-building,” a practice he has accused his predecessors of doing at huge cost.

Trump insisted in his speech that the Afghan government, Pakistan, India, and NATO allies step up their own commitment to resolving the 16-year conflict.

“We can no longer be silent about Pakistan’s safe havens,” he said, referring to complaints that Taliban and other militants move freely in Pakistan.

Pakistan’s foreign ministry did not respond to requests for comment, but on Monday Pakistani army spokesman Major General Asif Ghafoor said: “There are no terrorist hideouts in Pakistan”.

US Vice President Mike Pence told Fox News the rules of engagement were being changed “so that American commanders on the ground can make real-time decisions” and the United States would continue to target militants’ safe havens in Afghanistan and Pakistan.

“Pakistan has much to gain from partnering with our effort in Afghanistan. It has much more to lose by supporting terrorists. The president has put them on notice,” Pence said in an editorial in USA Today.

Trump also said he had expanded the US military’s authority for its forces to target militant and criminal networks, warning “that no place is beyond the reach of American arms”.

Nikki Haley, the US ambassador to the United Nations, told CNN that Trump’s strategy for Afghanistan included decisions that “are very different from anything that’s happened before.”

“What we are focused on is results, stomping out terrorism, doing whatever it takes,” she said. “You’ve seen the president do this with ISIS in Syria and Iraq. Now we’re getting ready to do it in Afghanistan.”

US Air Force Major Daniel Lindsey, an F-16 pilot who watched Trump‘s speech at the sprawling Bagram Air Field outside Kabul said he and his colleagues were now waiting for details of the changes.

“It’s obviously going to have some effects on us,” he said.

Trump‘s speech came after a months-long review of US policy in which the president frequently tangled with his top advisers.

Among the options were a complete withdrawal, a modest troop increase, keeping the status quo or a small reduction to focus only on counter-terrorism and not training Afghan forces.

Another unofficial plan promoted by Erik Prince, founder of the former Blackwater military contracting firm and brother of Trump‘s education secretary, Betsy DeVos, proposed replacing most US troops with mercenaries.

“The good news was the president rejected the truly dangerous ideas on the table, such as precipitous withdrawal or a transition to a mercenary force,” said Joshua White, former National Security Council adviser to Obama and now a researcher at John Hopkins University.