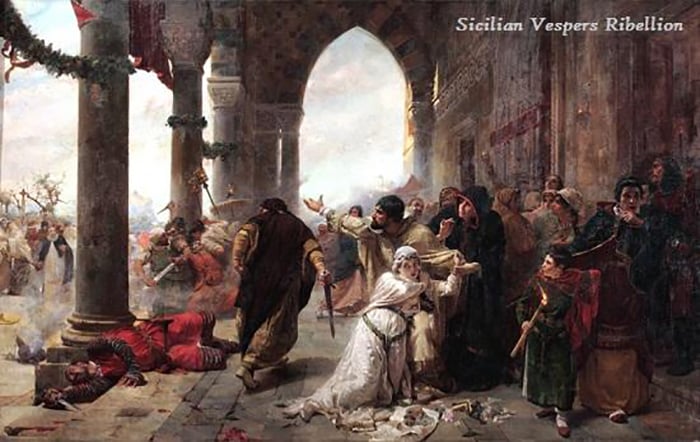 Emperor Michael VIII, Palaiologos, was very fortunate to be the first of his dynasty to rule the Byzantine empire from Constantinople, its traditional capital.

The City of the World’s desires, which had been captured by the Crusaders in 1204, finally returned to Byzantine hands, when general Alexios Strategopoulos took advantage a golden opportunity. He was passing by Constantinople leading a small force when he was informed by peasants that the city’s army and fleet were away on an expedition at a nearby island. Strategopoulos troops entered the city using a secret underground passage in late July 1261, surprised the remaining guards defending its Theodosian walls – the world’s most formidable – thus enabling Emperor Michael to enter his new capital a few weeks later to celebrate his triumph over the Latins in Hagia Sophia.

Michael’s empire was then fighting for its survival against enemies from the both west and north, having contained the threat by Seljuks in the east. While the emperor was getting used to his new capital, a bigger threat emerged when Charles of Anjou, the ruler of large swathes of France and an ally of the Venetians, became the ruler of Sicily and Naples. Charles was Michael’s sworn enemy and had been contracted by the Pope in Rome to restore the Imperium Romanum, which then was stretched from the Adria to the north-western part of Asia Minor.

When Michael ascended to the throne in 1259, he had inherited a smaller empire but with a strong economy. His predecessors had actively encouraged production and discouraged the importation of luxury products – something one would describe in today’s terms as successful structural reforms. This allowed the empire’s finances to recover and finance successive wars against various enemies, including the Latins and the Seljuks, thus recovering lost territories. Michael, emboldened by the mistaken belief that the re-capture of Constantinople cemented his rule, thought that betting on diplomacy was a better idea than strengthening his own army. When Charles joined forces with the Serbs and Bulgarians, the emperor resorted not only to diplomacy, but also used his empire’s limited finances to forge alliances with the enemies of his enemies. Recipients of gold from Constantinople included Sicilian nobility opposing French rule and King Peter of Aragon who was able to finance the building of a fleet with the Byzantine gold.

Finally, as Charles was about to launch his invasion, on March 31, 1282, when the bells of the Church of the Holy Spirit in Palermo started to ring for the vespers, the uprising in Sicily broke out. The fighting raged for six weeks, with local rebels slaughtering all French on the island including their non-French family members. Peter, the Aragonese king, exploited the opportunity to land with his war fleet on the island. And he took it -with the Pope’s blessing- for himself. Charles had to abandon his plans and Michael was safe.

“Should I dare say that I was the instrument of God to liberate Sicilians, then I would be saying the truth,” Michael wrote in his autobiography later.

And that was a truthful statement. But his grand foreign policy schemes came at a cost. In funding his allies’ military, he squeezed dry his own taxpayers, including his soldiers; the emperor had to resort to cutting the pay of his army and abolishing the tax exemption of the forces guarding the Anatolian border, thus allowing the infiltration of Turkish bands. As a result, the Byzantine power weakened irreversibly in Asia Minor, which, in effect, meant its complete destruction. On top, Catalan mercenaries employed by Sicily’s new rulers would years later plague the remaining empire Michael bequeathed to his successor Andronikos.

Examples of rulers growing complacent after attaining past glories and believing this is a guarantee for future success are not limited to Michael, who merely emulated many of his predecessors lucky enough to have full state coffers for their lavish diplomacy. This applies also to today.

There are examples of modern day governments, even of countries ravaged by financial crises, that resort to lavish policies that make certain groups richer at the expense of others and thus undermine the economy of their countries. The restoration of past glory, in the form of an economy growing at pre-crisis rates, is no guarantee for the future, especially when this is based on employing unsustainable policies. Just like Michael’s successors had to learn the hard way that reinforced walls offered no real guarantee against invaders when an empire’s economy collapsed, so modern governments need to realise that squandering public funds, even when the economy grows, is in no way a guarantee for a healthy economy in the long-term.

Therefore, after the Cypriot economy attained its ‘past glory’ in terms of economic growth -now expanding at 3.5 per cent- there is still no excuse of the government to subsidise with taxpayers’ money its enemies. Just like Michael taxed his soldiers to subsidise the Aragonese military build-up, so we see today the Anastasiades government willing to tax society to pep up unions, including those of the nurses, teachers, civil servants and also that of the bank workers, for the mismanagement of the provident funds of its members managed by bank workers.

And just like Michael’s empire paid a heavy price for subsidising its future foes in order to ally with them at a certain point, so also will the Cypriot economy ultimately pay another heavy price again for the government’s decision to give in to the demands of blackmailing unions in order to gain their favour.

Development of Larnaca port and marina on track, mayor says