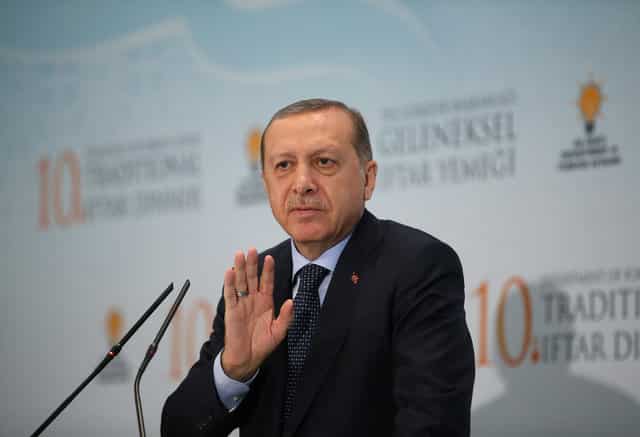 THE clash between Turkish president Recep Tayyip Erdogan and some EU countries last spring, and again with Germany recently, seems to be much more than a seasonal dispute related to elections in several EU members or the latest referendum in Turkey.

On Friday, Erdogan said German Chancellor Angela Merkel’s Christian Democrats were enemies of Turkey and called on Turks in Germany to vote against major parties in next month’s elections. It looks like Erdogan considers Europe as a vital sphere, as if it is a “European Turkestan”.

This is due to the “European bow” by signing in Brussels the migration deal with Ankara more than a year ago. The deal encouraged Erdogan to move forward to phase two of his strategy, after he had interpreted the agreement as a successful outcome of his political blackmail. This phase involved activating his networks of loyalists among Turkish communities in Europe. It shows also to what extent he managed to penetrate Europe’s left.
In Germany, where as much as four million Turks live, 60 per cent of those had voted in favour of his Justice and Development Party in 2015. Last July, Erdogan mobilised around 40,000 demonstrators in the city of Cologne after the failed coup d’etat.

His influence among his supporters reached a level of establishing a party called “Alliance of German Democrats” led by Remzi Aru, a businessman close to him, as the first Turkish-German political party. Perhaps, the “Turkish-Islamic Union for Religious Affairs”, usually referred to as DİTİB, is Edrogan’s most important arm.

In 2004, German left-wingers attended a large gathering organized by DİTİB. Among them was Claudia Roth who headed the Green Party between 2004 and 2013, and currently serves as a vice president of the Bundestag. Approximately, a third of Germany’s 3,000 mosques are funded by DİTİB. The Turkish president also enjoys support from the “Union of European Turkish Democrats”, an organisation which can be described as a “tool” through which he implements his policies in Europe. The Union, which was founded in Cologne in 2004, has offices in many EU countries, and has 46 branches in Germany alone. It acts as an unofficial representative to Erdogan and his party, mobilising voters and organising visits for leaders of the “Justice and Development”. In addition, there is “Milli Gorus” movement which is under scrutiny in Germany for promoting extremist views and inciting hatred.
In the Netherlands, 52 per cent of Turks voted for the Turkish president’s party in 2015. Branches of “Milli Gorus” and “Union of European Turkish Democrats” are also active, joining the efforts of “Diyanet” — a very influential religious organisation funded by the Turkish state. It controls hundreds of mosques in many EU countries, especially Germany, Belgium, France, Sweden and the Netherlands.

In 2014, “Denk” party was founded by Tunahan Kuzu and Selçuk Öztürk, two Turkish-Dutch who were members of the Labour Party. They managed to secure three seats for “Denk” in the 2017 parliamentary elections. Last year, Öztürk and Kuzu attended a rally in solidarity with Erdogan after the coup attempt. And if the Turkish embassy’s circular, which asks members of the community to report any anti- Erdogan statements or actions, is to be connected with a survey which showed that 20 per cent of Dutch Turks believe that Turkey is their “homeland”, it will be easy to conclude how a considerable percentage can potentially be a “fifth column”.
In Sweden, the picture is not so different. Most of Erdogan’s supporters are members of left-wing parties. Among them is Mehmet Kaplan, a member of the Swedish Green Party who served as Minister for Housing and Urban Development from 2014 to 2016.

He had to resign after local media exposed his connection to Turkish ultra-nationalists and religious extremists. In April 2016, SVT (Swedish national public TV broadcaster) published a report, supported by documents, on Kaplan’s connections to the Justice and Development Party, which prompted internal investigations within the “Green”.

Kaplan himself established an organisation named “Swedish Muslims for Peace and Justice” in 2008 which enjoys close ties with the “Islamic League”, widely considered the Swedish branch of the “Muslim Brotherhood” which, in turn, is listed as a terrorist organisation in several Arab countries. A study by the “Swedish Civil Contingencies Agency” revealed that the main Islamic organisations active in Sweden are connected to the “Muslim Brotherhood” and seek to build a “parallel society”. The research stressed that the mainstream left, in particular the Green Party, has formed a “secular cover” to those networks.

It is becoming more and more obvious that Erdogan is putting efforts to expand his political sphere of influence through an umbrella combining a mixture of trans-boundary nationalist and religious extremism, by allying himself with Devlet Bahçeli (chairman of the Nationalist Movement Party in Turkey), and relying on the “Muslim Brotherhood” — his traditional base. Consequently, EU countries might face a fate similar to that they were drawn into when they turned a blind eye on Islamic extremists during the 1980s and 1990s, unless they deal decisively with the Turkish president’s ambitions to create “safe havens” in their backyards.

Rauf Baker is a journalist and researcher with expertise in Europe and the Middle East.

Terrorism: a sense of proportion