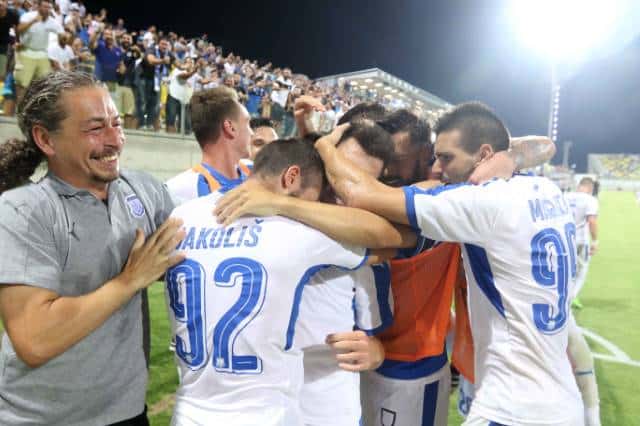 Thursday is the day of destiny for AEK and Apollon as they aim to book their places in the Europa League group stage with both playoff ties still very much open.

AEK host Viktoria Plzen in Larnaca and, after last week’s 3-1 defeat in the Czech Republic, the Cypriot side face a tough task of overturning the deficit.

Yet despite a dominant display from the Czech side, AEK’s early goal at the Doosan Arena scored by Acoran Barrera leaves them with a chance, as the away goal means that a victory by two goals without reply would see them through.

And while Plzen are certainly the toughest side they have faced so far in this year’s competition, results and performances at the AEK Arena give reasons for optimism.

AEK have won all three games at their new home in Europa League qualifying this campaign by scores of 5-0, 1-0 and 2-0 against Lincoln Red Imps, Cork City and Dinamo Minsk respectively.

Should they keep the back door shut as they have in their previous games then they will feel they have a strong chance until the very last kick of the tie.

Plzen also tend to struggle away from home in Europe. In their last seven games on the road in both the Champions and Europa League, they have lost four and drawn three.

AEK have made it to the Europa League group stage once in their short history, back in the 2011/12 season and will be looking to the support of the home faithful to inspire them to another memorable European campaign.

Apollon are no strangers to the group stage either. The Limassol club, in fact, were the first ever Cypriot side to make it into the Europa League groups two years in a row in 2013/14 and 2014/15.

The Limassol club now travel to the home of FC Midtjylland in Denmark aiming to make it three times in five years.
Sofronis Avgousti’s side managed to gain a slight advantage going into the playoff second leg with a last gasp winner to make it 3-2 at the AEK Arena last week courtesy of substitute Ioannis Pittas.

The Danish side will also fancy their chances due to their two away goals scored in Larnaca, which means they need a win by a narrow margin to see them through.

Alexander Sorloth first cancelled out Chambos Kyriakou’s early strike before making it 2-2 after Jander’s goal, but Pittas’ strike has swung the tie in Apollon’s favour and a gripping deciding leg awaits.

AEK get underway before all other matches on Thursday night at 7pm Cyprus time at the AEK Arena, while Apollon kick-off at 9pm at the MCH Arena.