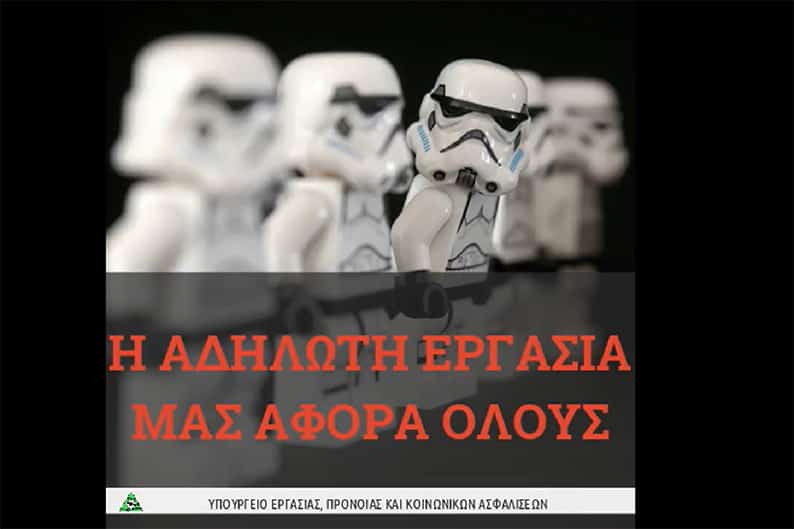 Armed with a modern ad and new legislation the labour ministry is hoping to get employers to declare their undeclared workers.

The online ad using the theme of the Star Wars stormtroopers warns that people have until September 3 to report the illegal employees, after which they will be fined €500 for each of them, going six months back, bringing the total possible fine to €3,500.

“The legislation has changed on June 1 coming into effect three months later,” senior labour inspector Andreas Apostolou told the Cyprus Mail, “before there was no fixed fine and we took people to court.”

These are not on-the-spot fines, but people are given five days to bring proof that their employees are legal.

Those who don’t cooperate with the registration will then face legal action in addition to the fine.

Whereas the stormtroopers are fictional soldiers who police the Galactic Empire the labour ministry will rely on inspectors to enforce the law.

There are now more inspectors than ever, four units, one for each region, and a total of 15 inspectors from the labour relations departments plus several from the social insurance services carry out around 6,000 checks per year, something which Apostolou said is going to increase.

The inspectors have every right to inspect any workplace day and night just armed with an ID without notice. They may take another person, or, when they have reasons to believe they will be prevented from carrying out their duties, a police officer.

To gain entry to residential areas, the procedures are different. In case the owner of a home doesn’t cooperate and declines to let the inspector in, a warrant or permission from the head of police is needed.

During an inspection, the officials have the right to do much more than search the premises. They can carry out audits, inspections, surveys and other investigations they consider necessary to implement the legislation.

The new ad which is being circulated via Twitter gives people the possibility to report any illegal activities related to employment by calling the hotline 77778577.

It is also possible to fill in an anonymous complaint via the website of the ministry at http://www.mlsi.gov.cy/mlsi/mlsi.nsf/mlsi16_en/mlsi16_en

An opera of much humour