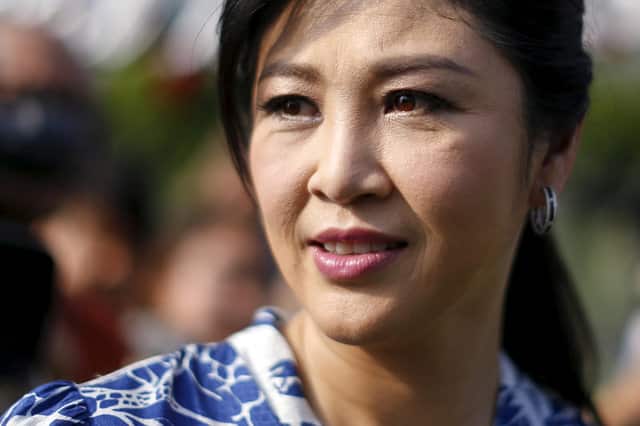 Thailand’s Supreme Court accused ousted prime minister Yingluck Shinawatra of fleeing or going into hiding on Friday after she failed to show up for the verdict in a negligence trial brought by the ruling junta.

Yingluck, 50, whose family has dominated Thai politics for more than 15 years, faces up to 10 years in prison if found guilty in a case centred on the multi-billion dollar losses incurred by a rice subsidy scheme for farmers.

The court set a new date of Sept. 27 for the verdict, and said it would seek an arrest warrant for Yingluck as it did not believe her excuse that she could not attend the court hearing because of an ear problem.

“We think that the defendant is hiding or has fled,” a statement from a Supreme Court judge said. “She asked for sick leave not to show up today.”

Yingluck’s lawyer, Norrawit Lalaeng, said her team had told him on Friday morning she had an “ear fluid imbalance” and could not attend court. He said he was unaware whether she was still in the country.

Thailand’s Deputy Prime Minister Prawit Wongsuwan said he could not confirm whether Yingluck was still in Thailand.

“She could be at any hospital … she could be ill. It’s not clear whether she has fled,” he told reporters. “Yingluck has many homes and many cars. It is difficult to track her.”

The head of immigration police, Nanthathorn Prousoontorn, told Reuters he believed she was still in the country and would be arrested when she was found.

Yingluck last commented on social media on Thursday, saying on her Facebook page that she would not be able to meet supporters at court because of the security measures. The doors of her home were shut and local media said there had been no movement there since the early morning.

Yingluck’s brother Thaksin Shinawatra, who heads the political clan, was overthrown in a 2006 coup and fled into exile to escape corruption charges that he said were aimed at demolishing the populist movement he founded.

That movement, pitted against a Bangkok-centered royalist and pro-military elite, has been at the heart of years of turmoil.

The verdict against Yingluck is widely seen as having the potential to reignite tensions, though the junta has largely snuffed out open opposition.

Hundreds of Yingluck supporters had gathered outside the court on Friday where around 4,000 police had been deployed and checkpoints had been set up. The trial has taken around two years and Yingluck has shown up for previous hearings.

Under the rice subsidy programme, Yingluck’s administration paid farmers up to 50 percent more than market prices for their rice. The policy was popular with farmers but left Thailand with huge rice stockpiles and caused $8 billion in losses.

Yingluck has said she was only in charge of coming up with the policy but not the day-to-day management of the scheme. Her administration was removed in a 2014 military coup.

In the northeastern province Khon Kaen, a Shinawatra stronghold, a leader of the red shirt political movement that supports Yingluck said her supporters felt frustrated. Some had been preparing for protests against the verdict.

Shinawatra’s Puea Thai Party has said it does not support acts of violence. Some supporters outside the court in Bangkok held roses while others wore white gloves with the word “love” on them.

The court is due to rule in the separate case on Friday of Yingluck’s former commerce minister Boonsong Teriyapirom who is accused of falsifying government-to-government rice deals between Thailand and China in 2013.

Prime Minister Prayuth Chan-ocha, who led the 2014 coup against Yingluck’s government in the name of ending political turmoil, has promised that an election will be held next year.

Regardless of whether she is found guilty or innocent, Yingluck will not be able to run in that election because she was banned from politics for five years in 2015 by the junta’s legislature for alleged graft in the rice-purchasing programme.

If Yingluck is found guilty she has 30 days to appeal and is expected to post bail, avoiding any immediate prison time.