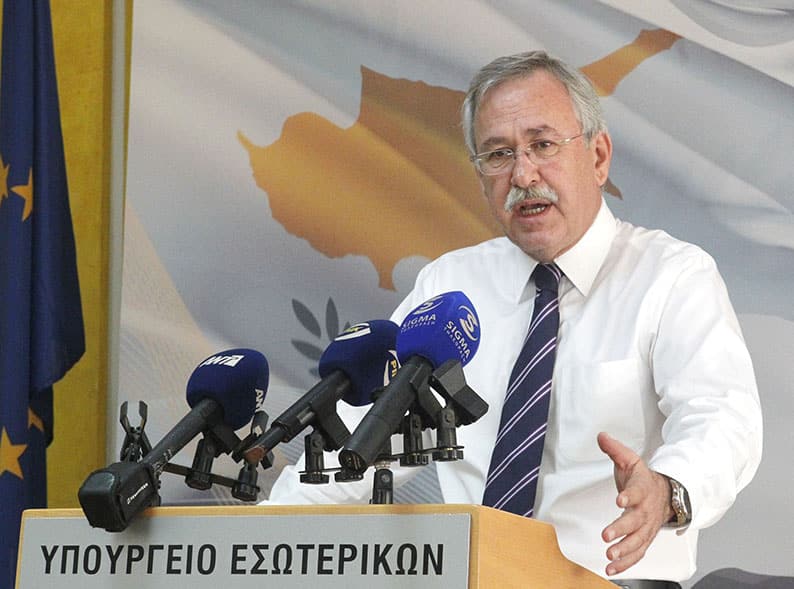 Former interior minister Socratis Hasikos accused the mayor of Paphos on Saturday of being a publicity seeker with nothing new to say after he named individuals and businesses who have allegedly been misusing Turkish Cypriot properties for decades.

His scathing comments were echoed by another former interior minister, Eleni Mavrou, though in a much milder fashion.

Both said that investigations into cases of mismanagement were already well underway with action taken to evict some property holders, and that Phedonas Phedonos’ general allegations had already been included in several annual reports by the auditor-general.

“I wonder if there is anything new among what the Paphos mayor is reporting,” Hasikos said.

On Wednesday, Phedonos named some of the people he alleged were involved, including prominent businessman Nicos Shacolas, former defence minister Elias Eliades, and Dionisis Malas, father of Akel’s presidential candidate Stavros Malas. All have denied wrongdoing while Shacolas’ company has threatened to sue Phedonos.

“Phedonas needs to understand that he is not the guardian of Turkish Cypriot property and that he cannot resort to populism and deconstruct state institutions,” Hasikos said.

What Phedonos reported, Hasikos said, also all concern administrative contracts and he questioned whether the police have the jurisdiction to investigate.

Hasikos said that the majority of cases concern the period prior to 1991, after which the issue was regulated by law.

Until 1991, he conceded, Turkish Cypriot property was given to non-beneficiaries to serve political party interests.

Hasikos said that as the Guardian of Turkish Cypriot property, the interior ministry had already taken action to evict those holding such property illegally.

Pointing to his own stint as interior minister between 2013 and earlier this year, he highlighted the corruption cases concerning Turkish Cypriot property that he had dealt with, adding that for the first time that people were sent to prison “from all parties”.

Hasikos was referring to the land scam involving the illegal purchase by the telecommunications authority’s (CyTA) pension fund of Turkish Cypriot property in Dromolaxia, Larnaca, and the construction of an office-space complex at an inflated price. High-ranking Akel member Venizelos Zanettos, ex-CyTA boss Stathis Kittis and former EAC boss Charalambos Tsouris were among those found guilty.

He added that although many non-refugees hold Turkish Cypriot property, they got it legally through contracts they signed with the government.

Hasikos said that community councils and municipalities cannot claim Turkish Cypriot land if a refugee is using it legally and insinuated that this was the case with one of the properties in Paphos.

Eleni Mavrou, who was interior minister for part of the Demetris Christofias administration, said that mismanagement of Turkish Cypriot land was an open secret which had been mentioned in several reports of the auditor-general. The interior ministry had also looked into hundreds of cases which resulted in Turkish Cypriot property being taken back from users.

“This is not new, what’s lacking is regular and strict checks,” Mavrou told the Sunday Mail.

It is not enough to each time go after those who are being reported of abusing the system, she said.

“Since the government has identified this problem, it needs to take those measures to prevent it from happening,” Mavrou said.

She added that the existing law is comprehensive and specific and up-to-date as it was last amended in 2012.

“Our attention should be turned to check procedures and transparency,” she said.

She added that thousands of plots and buildings owned by Turkish Cypriots were given to refugees and others to manage, and that the cases of misuse concern only a fraction but they tended to be land and establishments of great value.

Transparency is the key, she said. “But for the public to be able to check who rented what, there should be public records for every contract.”

Mavrou conceded that there had been interventions when big interests were at stake. The House refugee committee heard recently that one third of Turkish Cypriot establishments used for professional purposes in Paphos, were given to non-refugees. “That’s a large number,” she said.

Refugees are given priority, she said, while non-refugees are usually only granted such property based on socio-economic criteria.

Daily Phileleftheros reported on Saturday that Turkish Cypriot property had been, in the past, rented out to embassies, petrol companies and other businesses for as little as CY£2 per year.

Deputy police spokesman Stelios Stylianou said that out of the 30 cases Phedonos had reported 16 of them concern districts other than Paphos, mainly Larnaca.

Speaking on Saturday to state broadcaster CyBC, Stylianou said that it was still too soon to estimate when the investigation would be completed as it would take a lot of time to go through each case. If necessary, he said, the case file would be sent to the legal services for advice.

Following the invasion, vacant Turkish Cypriot property was given by the state at low rents, mainly to Greek Cypriot refugees.

In his testimony, Phedonos reported that people who were not eligible managed to get their hands on some of these properties and sublet them and get rich, while some refugees did not get anything.

Paphos police have set up a task force to investigate the allegations, while auditor-general Odysseas Michaelides said on Friday he would launch an in-depth investigation into the Turkish Cypriot property mismanagement, on the basis of available information and what has been revealed recently.

Sterling grabs last-gasp victory for City, then sent off